Why does speed affect turn radius when turning a motorcycle given a fixed lean angle?

I do not understand how velocity effects turning radius at a fixed lean angle. I would think that turn radius is proportional to lean angle regardless of velocity (within limits of no traction loss or tyre warp or falling over)

My reasoning is that I understand motorcycles turn due to lean. At lean the outer tyre contact patch has a shorter wheel radius than the inner tyre radius. The bike turns in an arc resolve the differences in outer tyre radius and inner tyre radius. (think of a cone rolling along a flat surface, the cone will roll in a turning direction). And that tyres are parabolic in shape which means greater leans increase the difference between inner and outer contact patch which makes smaller (sharper) turning circle.

If there is no loss of traction and no warping in the tyre (like the cone example). Would the speed of the rolling cone make any difference in the turning circle of the cone? Would not the cone make the same turning circle radius regardless of speed? and the motorcycle tyre do the same?

Is the formula above simply describing something else; like the minimum speed you need to hold a lean at a given lean angle without falling over?

newtonian-mechanics velocity
Share
Improve this question
edited May 26, 2020 at 17:54

It helps to understand where the $\theta$ formula comes from. Consider the free body diagram: 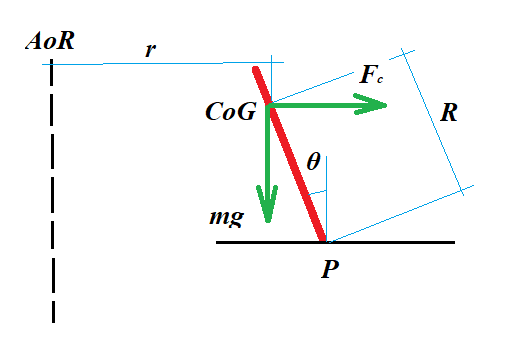 There are now $2$ torques, acting in opposition about the point $P$. To prevent the bike from flipping over either way, both torques have to cancel each other, as per N2L: $$mgR\sin\theta=F_c R\cos\theta$$ The $R$ cancel, so: $$\Rightarrow mg\sin\theta=\frac{mv^2}{r}\cos\theta$$

The formula makes one important assumption, primarily that there's enough friction between the pivot point $P$ and the road, to maintain the rotation about the AoR. Precisely how this is achieved is irrelevant to the lean and the formula doesn't need to concern itself with that.

The lean simply arises from the balance of torques shown in the free body diagram.

The static friction between the tires and road causes the centripetal acceleration. For minimum radius of turn at a given speed, you want the maximum allowed friction, μN. At any speed you want the resultant force from the road to point through the center of mass. This gives the condition for the angle of lean from the vertical, tan(θ) = f/N =((mv^2)/R)/(mg). For maximum friction, tan(θ) = μN/N = μ. Given that no road surface is perfectly uniform, one should not try turning at this minimum radius .

Not the answer you're looking for? Browse other questions tagged newtonian-mechanics velocity or ask your own question.

3
Countersteering a motorcycle
7
What is the relationship between rolling resistance and velocity?
2
Turning Radius = f(speed,turning angle)
1
Turning a bike, why does it lean?
5
Relationship between Radius of curvature and Instantaneous Axis of Rotation
2
Kinetic Energy of a Rotating Cone
1
Why is the formula for maximum speed in frictionless surface used to calculate optimum speed to avoid wear and tear of tires?
1
How do I find the exponent of the inner and outer radius of a rolling cylinder?
0
Does a cornering wheel turn (change the direction it travels) at its contact point or some other location?