A ball is moving forward and undergoing rotation. Assume that it is not slipping. Eventually, the velocity and rate of rotation of the ball decrease, and it comes to a halt.

But if you observe the direction of friction (when the ball is rotating clockwise), you will see that the friction should have provided a clockwise torque to the ball and the angular velocity of the body should have increased. But this doesn't happen. Why?

Edit : Doubt arising from the accepted answer is here

First let us clear up some definitions of the terms "reaction force", "normal force", and "frictional force".

Whenever there is a contact between two bodies, there is a reaction force on each body at every point of contact. A reaction force can be split into a normal component (sometimes called the "normal contact force"), and a tangential component (sometimes called the "force due to friction"). The direction of the force due to friction⁠ - the tangential component⁠ - is such that it opposes relative motion due to sliding / slipping.

So why do balls we observe normally slow down?

The answer lies in something called "rolling resistance" (sometimes confusingly referred to as "rolling friction", or just "friction"), and entirely explains why a football comes to a stop after rolling it along the ground.

The key is that footballs and dirt are both compressible - they are not rigid bodies. On contact, the weight of the ball deforms both it and the dirt. This means that there are many points of contact between the ball and the dirt. Due to our definition, there are now many normal forces - to be precise, one per point of contact. We will ignore the tangential frictional components for now.

The deformation of the ball and the surface means that the line of action of these normal components is not through the center of the ball (see diagram).

Notice how we did not even consider any tangential frictional components at all. Just due to the normal components the ball is slowed.

There are a couple of points I have not covered, such as what role the frictional components do actually play and what happens in different types of deformations (e.g. the surface doesn't deform). Also you may be wondering why the normal forces on the right are greater. The answer to all these can be found at: https://lockhaven.edu/~dsimanek/scenario/rolling.htm . This is also where my diagram came from and I credit for these explanations. The exact diagram from your question is also used here and cited as a "naive pictures of friction and a rolling cylinder."

Rolling resistance, a.k.a., rolling friction, is basically the result of inelastic compression and decompression of the materials at the contacting surfaces (wheel and/or surface upon which it rolls). The inelastic behavior results in friction internal to the materials and a loss of energy dissipated as heat, known as hysteresis.

See the picture of a tire below.

The leading edge of the contact surface materials between the center point of contact and the starting point of contact compress. The resultant reaction force acts backwards on the wheel as shown.

When the materials separate at the rear side they decompress. The reaction force acts forward on the wheel as shown.

The squeezing and un-squeezing of the materials is not purely elastic and therefore internal friction dissipates energy in the form of heat. This loss of available energy for rolling due to heating is called hysteresis. As a result the reaction force acting forwards during un-squeezing is less than the reaction force acting backwards during squeezing eventually bringing the wheel to a stop. 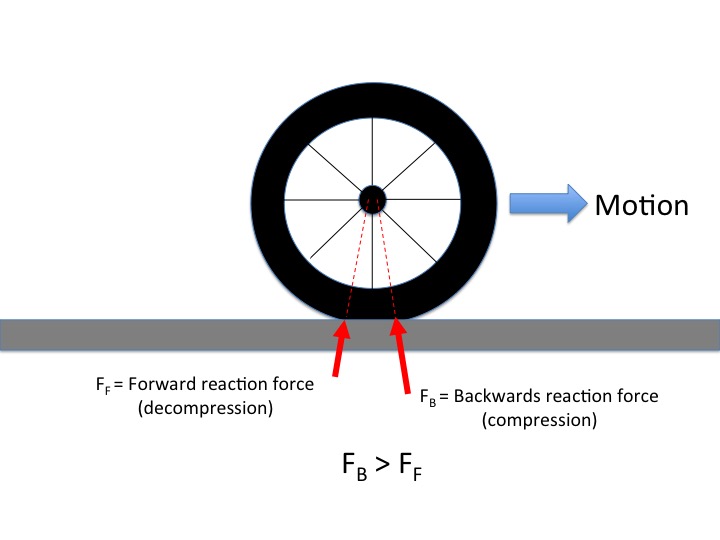 Suppose nothing slows the sphere. It rolls forever. In that case, it would roll the same on ice. The friction in your diagram would be $0$.

Suppose it rolls on a rough surface and something (wind resistance? ) slows it. That is, a force on the center of mass acts in the backward direction. Friction of the surface would keep the sphere from slipping. That is, friction would act in the forward direction. Those two forces form the torque that slows the rotation.

The purpose of friction here is to ensure pure rolling of object once it is attained friction self adjusts itself and then acts only to ensure that the lower most point I.e point of contact has zero velocity

Because it would act as a perpetual motion machine, contravening some quite fundamental laws. Also, all the cyclists would be dead, which I observe not to be the case.

6
Why Front part of a body undergoing rolling pushes the surface a “bit more”?