Torque and dynamics of a slipping ladder [closed]

Ask Question
Asked 8 months ago
Active 8 months ago
Viewed 84 times
2
$\begingroup$
Closed. This question is off-topic. It is not currently accepting answers.

A ladder is positioned against a wall, it forms a $30^\circ$ angle with the floor. A person that was holding the ladder releases it. The ladder starts accelerating down and to the right. The wall is frictionless but the floor is not. 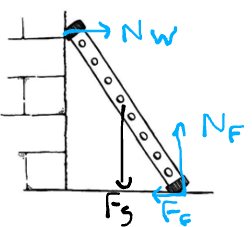 The statement of the problem ranks the forces in the following way:

As the ladder is accelerating down and to the right, it is easy to demonstrate that $F_g>N_f$ and $N_w>F_f$ by Newton's Second Law.

I have doubts regarding how to complete the ranking, this is what I've tried:

Since it rotates in the counterclockwise direction.

Where $\theta$ is the angle between the ladder and the floor.

Not the answer you're looking for? Browse other questions tagged homework-and-exercises newtonian-mechanics classical-mechanics torque or ask your own question.

12
Rotation of a slipping ladder

4
Finding the tension in rope tied to ladder using the principle of virtual work
1
Cylinder rolling down an inclined plane held by a string
0
Banked Curve with friction
1
Dynamical friction force
1
Static equilibrium - Ladder against a wall, how far can person ascend
0
Reaction forces acting on a ladder against a wall