So imagine space is a regular square mesh or lattice. In a theory like QCD, the photon lines are placed along the edges of this graph to form paths.

The space is supposed to represent simple Minkowksi space in the limit when the lattice points approach zero.

So what would a graviton (a quanta of curvature) be like in this picture?

I had a thought that graviton paths could be "off-grid". i.e. the paths of the gravitons would be new lines that intersect the graph at midpoints of the edges thereby creating new vertices in the graph and more "space-time". And photons could even move along these new lines and vertices. All particles would emit these graviton lines and hence create more space-time vertices near themselves, giving apparent curvature. 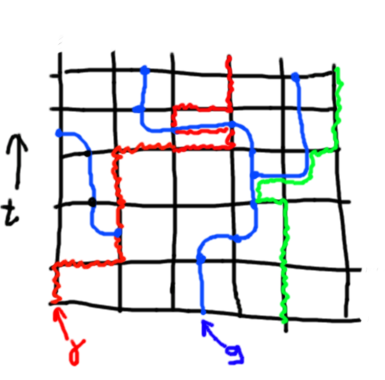 In more than 2+1 dimensions, one could imagine tubes that go through the graph and intersect the vertices in the graph creating additional vertices and edges. 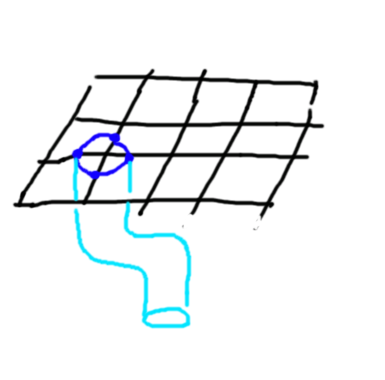 Therefor if you had a lot of these graviton paths this would create a lot more vertices and edges creating additional space-time volume in that area giving the appearance of curvature.

Or alternatively there might be special "graph rules" for how these localised "gravitons" move about the grid. e.g:

Well, anyway, the point of this being is that, is this a way that one can have gravitons which are like particles but also like localised areas of space-time curvature? (And is this necessary?)

One problem is that we are starting with a mesh which is like background of interacting gravitons. (Just replace the black lines with blue lines!) And we have to explain why this is an acceptable background to start with.

Not the answer you're looking for? Browse other questions tagged quantum-gravity quantum-chromodynamics lattice-model lattice-gauge-theory or ask your own question.

14
What is the role spin-networks play in Loop Quantum Gravity?
3
What is the connection between gravitons and geometry?
7
Gravitational lensing of gravity
2
How do Graviton-based theories of gravity explain the expansion of the universe?
0
First quantization of a graviton in 4 dimensions and related quantum numbers
2
What really is GW quanta?
0
Geometrical proof of number of lattice points in 3D lattice
1
What's wrong with casual dynamical triangulation?
2
How does the "Space from Hilbert space" program incorporate Lorentz invariance?