Why the readings of wattmeter in both cases coming out the same even though they are connected at different places?

The value of resistance is 3Ω and inductor impedance is j4Ω.

As far as I have learned the wattmeter measures instantaneous power but shows reading for average power. As I solved for the given values the power comes out 12W in both cases even though they are connected at different points in the circuit and I want to know why?

I can't seem to figure out the reason behind this. Can someone please point out? Thank you 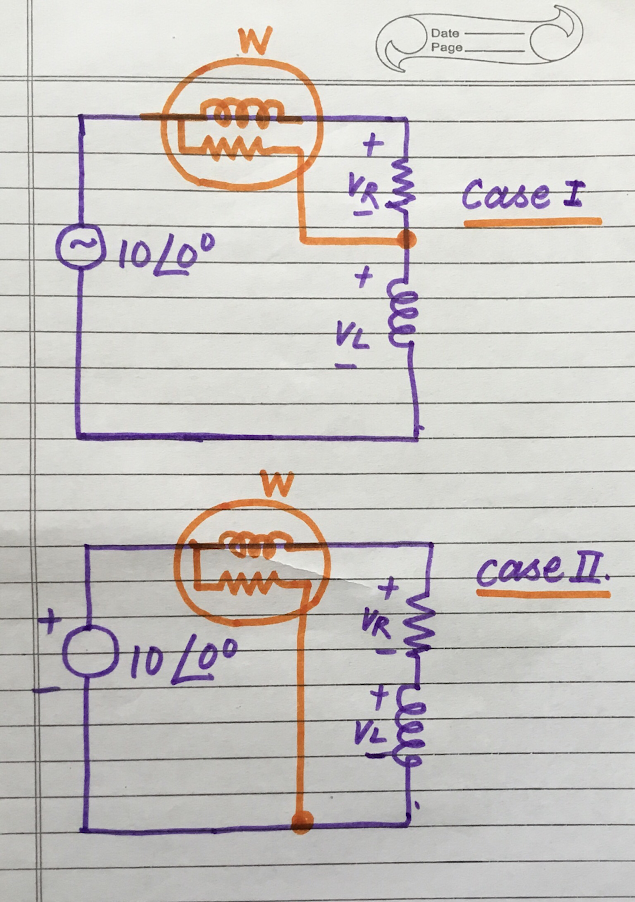 electricity electric-circuits electric-current inductance
share | cite | improve this question | |
edited May 24 at 11:33
Darkco
asked May 24 at 5:23

(a) Wouldn't you expect this result? A pure inductor takes in no mean power over a period of time, so the power taken in by the inductor-resistor combination ought to be the same as that dissipated in the resistor alone.

Looking at this in terms of current and voltage, let the circuit current be $$I(t)=I_0 \cos (\omega t)$$

(b) How does the wattmeter work? Essentially the circuit current, $I(t)$ is carried in a low impedance path through the meter between the top two terminals, while the voltage, $V(t)$ is registered between the left hand terminal and the bottom right terminal (between which the meter impedance is high). The meter calculates $I(t)V(t)$ (instantaneous power) at frequent intervals and presents you with its mean value over a period of time. This is the mean power.

Not the answer you're looking for? Browse other questions tagged electricity electric-circuits electric-current inductance or ask your own question.

0
Unsatisfactory explanation for the EMF measurement of a battery
0
Questions about the formula used to determine inductive reactance and $Z_t$
1
Why is it that sometimes current is not inversely proportional to resistance?
0
Deteminining the voltage across an AC source
1
Is there an RMS value for power delivered to an inductor?
0
How to intuitively think (or get a 'feel' of L-R circuit)?
0
Why does the current through an Inductor changes when the Inductor doesn't like the change of flux through it?