Contradiction between classical electromagnetic theory and the principle of relativity

However, this does not completely remove the difficulty, for there is still an apparent contradiction between this classical electromagnetic theory and the principle of relativity discussed in §1.1. This arises from the fact that if the speed of light is constant with respect to one inertial frame — as it should be according to electromagnetic theory — then the usual rules for combining velocities would lead to the conclusion that it is not constant with respect to a relatively moving frame, in contradiction with the statement that all inertial frames are equivalent. This paradox can only be resolved by the introduction of Einstein’s theory of relativity (i.e., ‘special’ relativity). Classical electromagnetic theory and classical mechanics can be incorporated into a single self-consistent theory, but only by ignoring the relativity principle and sticking to one ‘preferred’ inertial frame.

The aforementioned "principle of relativity" is described as follows:

Given two bodies moving with constant relative velocity, it is impossible in principle to decide which of them is at rest, and which moving. This statement, which is of fundamental importance, is the principle of relativity.

I don't understand the authors' description of the problem. I would greatly appreciate it if people would please take the time to explain this to me.

I'm not sure if I've understood the question exactly, but it seems to be asking what exactly it is about the (Galilean) principle of relativity that makes (Classical) Electromagnetic theory incompatible with it.

The Principle of Relativity, as you say, basically states that there's no physical experiment that you can conduct in two different inertial frames moving with respect to each other to tell "which" of them is "actually" moving: the very question makes no sense. This is a consequence of the way that space and time transform when you move from one inertial frame to another. 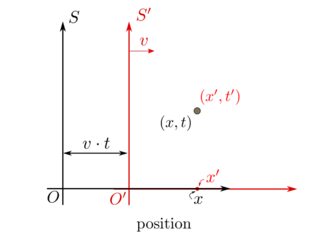 Let's try to put this into a mathematical formalism using our "common-sense". Suppose you had two people, one person ($S^\prime$) in a train, moving rightwards with a velocity $v$, and another on a platform ($S$), and if the person on the platform would like to know what the coordinates of an event $(x,t)$ would look like to someone on the train $(x^\prime, t^\prime)$. For simplicity, we can choose $x=0=x^\prime$ and $t=0=t^\prime$. Using "common sense", it's a simple enough exercise to show from the above figure that:

These are called the Galilean Transformations, and they relate the way that the person in $S$ observes the world, to the way that the person in $S^\prime$ observes the world. A natural consequence of this is that the two observers will never agree upon the velocities of a third object. For example, suppose there was a dog running (rightwards) on the train, and both observers were measuring its velocity. The velocity measured by someone on the platform would be

Using the above Galilean Transformations, and the fact that $v$ is a constant, it's quite trivial to show that a natural consequence is that $$u^\prime = u - v.$$

as should be expected since the frames are inertial, but which also means that the physical laws in both frames will have the same form, since Newton's Laws only deal with accelerations.

An important consequence, however, of this "velocity addition" formula is that there is no (finite) velocity that observers in $S$ and $S^\prime$ will agree upon, since if this were the case, you would need to have

The only value of $k$ that solves the above equations is $k=\infty$. The only frame-independent speed (i.e.\ the only speed that all observers in all inertial frames can agree upon) is infinity.

Since this is a direct consequence of the Galilean Transformations, if we had another theory that required a frame-independent speed that was finite, then we would have to say that that theory was not compatible with the Galilean Principle of Relativity, and this is precisely what Classical Electromagnetism required. According to it, there is a speed, $c$, which -- despite being very large -- is not infinite, and which everyone in all inertial frames could agree upon. Thus, if Electromagnetism was to be considered "right", we require either that our "common-sense" Galilean Relativity is wrong, or that Classical Electromagnetism is not compatible with Principle of Relativity.

However, it turns out that Classical Electromagnetism is compatible with the theory of relativity, it is just that our "common-sense" Galilean Transformations are not true, and they have to be replaced with the correct "Lorentz Transformations", leading to the Special Theory of Relativity, which is consistent with Electromagnetism. (In fact, it's a fun exercise to how that the magnetic field is an entirely relativistic effect!)

I will give my take on this.

The statement for the relativity principle is that two inertial frames, any two and by extension all of them, are equivalent. Thus, a moving object would be described by the same laws in any reference frame, only changing coordinates accordingly. However, here we have two choices, so to speak. One is to use Galilean transformation laws between two reference frames, Newton's laws would be the same and the kinematics and dynamics the same as well. The problem is that Maxwell's laws and specially the wave equation (for light) you find in them is not invariant under such coordinate transformation $x \rightarrow x'= x - Vt.$ Moreover, they are invariant under Lorentz transformations which is the other choice. The problem is that Newton's laws are not invariant under Lorentz transformations and therefore we need to decide what to do.

In Galilean transformations, to find the speed of any phenomena (i.e. $v$) when changing from a reference frame to a moving one (lets say with speed $V$), we add them as in $v \rightarrow v' = v -V.$ This means that there is always a reference frame for which the phenomena can be at rest. If they are equivalent then light could be stopped and studied at rest in that frame, the wave equation in that frame should have $c=0.$ If one is to accept that light follows that same rule of Galileo, there should be a reference frame for which light is at rest.

For electromagnetic waves that is not the case, one can not find a reference frame where light is at rest, all reference frames, no matter what, measure the same speed for light. Galilean transformations are not correct for Maxwell's theory.

Not the answer you're looking for? Browse other questions tagged electromagnetism special-relativity classical-mechanics inertial-frames or ask your own question.