Axial anomaly at the level of particles

Consider pure QED with massless electrons. Due to the axial anomaly the axial current is not conserved:

What is then the physical manifestation of the equation (1)? What are its observable consequences?

The current is basically the goldston: The corresponding charge pumps such goldstons into and out of the chirally non-invariant vacuum!

As a consequence, the corresponding term of the effective Lagrangian which gives you the above current divergence is
$$ \frac{e^2 N_c \pi^0}{48 \pi^2 f_\pi} F_{\mu\nu}\tilde{F}^{\mu\nu}. $$ It therefore induces neutral pion decay to two photons, quite observable and physical, really. 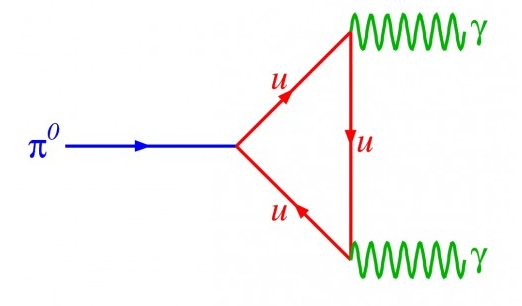 This term was an early reassurance of the genius of the WZWN term of flavor-chiral anomalous effective actions.

Not the answer you're looking for? Browse other questions tagged quantum-electrodynamics quantum-anomalies or ask your own question.

14
Chiral anomaly and decay of the pion
13
On the Axial Anomaly
8
Why is it important that the vector current should be conserved in QED?
15
QED and anomaly
3
Is it the chiral anomaly which is solely responsible for having instanton effects (and therefore, the $\theta-$term) in the QCD action?
8
Anomaly, symmetries, and Ward identity