Why does circular motion stop when the rope breaks?

Therefore, let's go over a simpler example first. Let's say you have a rope that can withstand $1\,\rm N$ of force before breaking, and let's pull horizontally on a $1\,\rm{kg}$ box with it. Then of course the rope will break if we try to accelerate the box at $1\,\rm{m/s^2}$ or more. This is because we know that the horizontal force component by Newton's second law is $F_h=ma_h=T$. Notice how there is just one relevant force here: tension. We haven't said there is a tension force and a horizontal force, as tension force is a/the horizontal force in this case.

With all of this in mind, let's address specific parts of your question:

why is it that when a ball spinning on a rope has a centripetal force larger than the tension of the rope...

For horizontal circles this is not possible because the tension force is the centripetal force responsible for the circular motion. For vertical circles gravity also has a centripetal component depending on where the object is in the circle, but even then the better wording would be "the rope breaks when its tension force would need to be larger than its maximum amount to produce the required acceleration".

has it got something to do with the centrifugal force that the tension can no longer balance and so the ball goes off?

No. If you are viewing the system from an inertial frame of reference then there is no centrifugal force acting on the ball. If the circle is horizontal just the tension force is relevant for the circle. However...

but my understanding is that the centrifugal force is fictitious so cannot be used in an argument.

It is fictitious, but that doesn't mean you can't use it. You just have to understand when you can use it. If you were looking at the scenario in a rotating frame that spins with the ball then you would see a centrifugal force that is equal and opposite to the tension force. But you have to bring the centrifugal force in because you are no longer in an inertial frame reference, yet you still want Newton's second law to be true (at the expense of Newton's third law). If this seems confusing, then you can understand why introductory physics teachers tend to just say "centrifugal forces aren't real, so don't talk about them." :)

The centripetal force is just a name we give the force which causes circular motion. This can be any force. 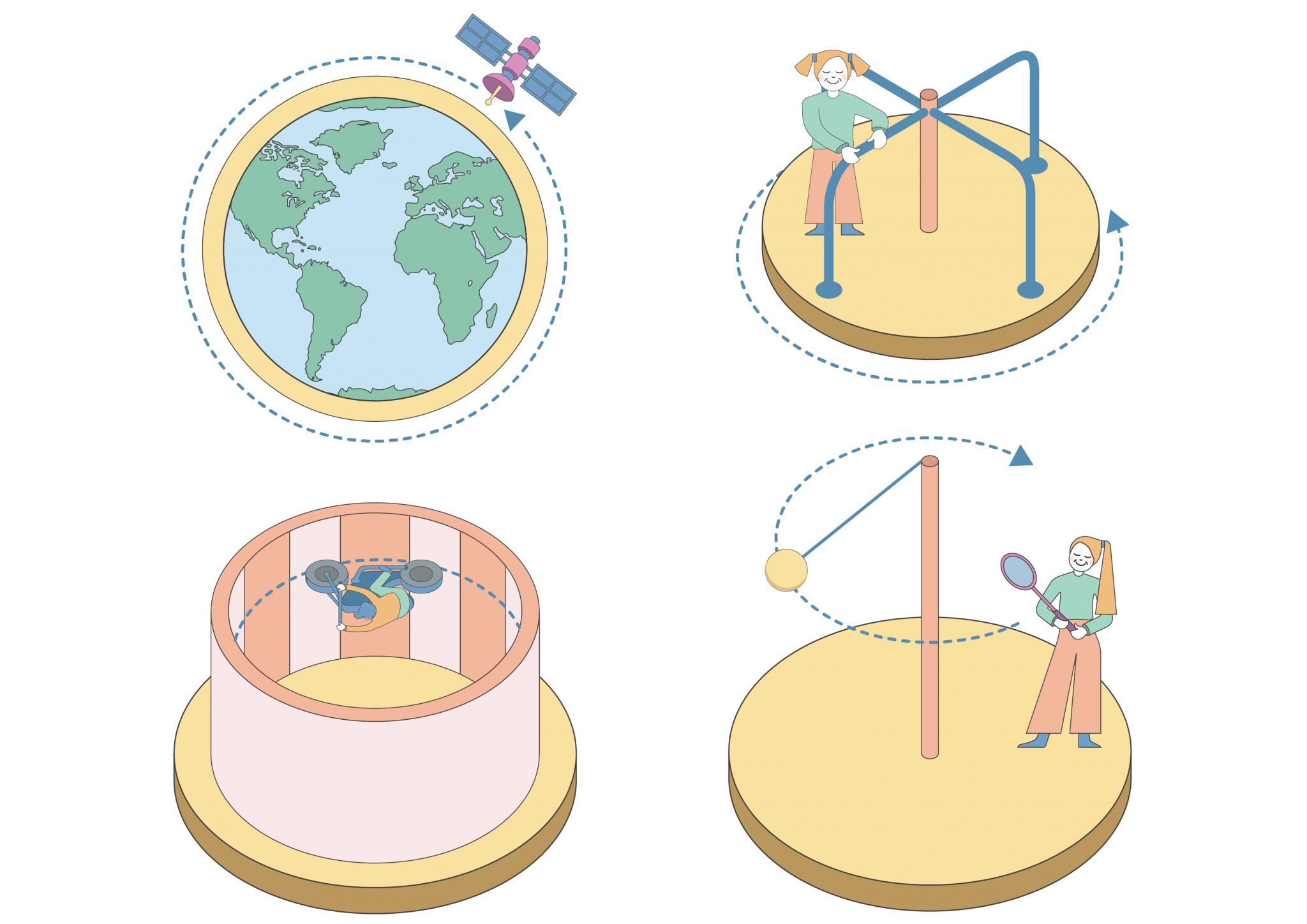 When that force disappears, there is no centripetal force present anymore. Meaning, in Newton's 2nd law there is no force in the plane of the circle anymore:

No force which can be the centripetal force means no centripetal acceleration. That was the acceleration which took care of constantly turning the motion, so we had a circle. Without this, we are stuck with Newton's 1st law which tells that the object just continues with whichever velocity (speed and direction) it had at the moment the acceleration disappeared.

If the Earth suddenly disappears, the satellite will continue tangentially with the velocity it had at that moment. Same for the spinning girl, if she let's go of the merry-go-round handle. Same for the Wall of Death motordrome biker if the wall suddenly breaks as he drives over it.

And same for the ball-on-string, when the string breaks.

Centripetal force is that force which makes an object rotate in a circular path. In different scenarios, this force is available from different agents. For example, if a moving charged particle is put in a magnetic field, its path becomes circular (or helical depending on the initial velocity) where the Lorentz force provides the necessary centripetal force for rotation, i.e., $$\frac{mv^2}{r}=q|\textbf{v}\times\textbf{B}|$$
Again, if a marble revolves in a circle on the inner surface of a frictionless hemispherical bowl, the radial component of the normal reaction provides the necessary centripetal force for revolution. If a cyclist moves in a circular path, the friction between the wheels and the road provides the necessary centripetal force:$$\frac{mv^2}{r}=f_{friction}$$ There is a maximum limit to the friction force. The cyclist skids off if his velocity exceeds the velocity limit or the radius becomes less than the minimum radius allowed by this maximum friction force possible.

Similarly, in your scenario, the Tension in the rope provides the necessary centripetal force for rotation. When a body of mass m moves in a circular path, its velocity is always along the tangent to the circle. It can be resolved into a radial and a tangential component. If $T$ is the tension in the rope, $$\frac{mv^2}{r}=T$$ This tension force depends on the material of the rope and has a maximum limit, say, $T_{max}$. So, $$v_{max}=\sqrt{\frac{T_{max}r}{m}}$$ When the velocity of the ball exceeds this limit, the rope snaps. You can find the reason behind this from the following discussion : Rotating a stone with a string wherefrom I quote : ''the faster the stone is going, the harder the string must pull to make it travel in a circle. So when the stone is rotating, the tension in the string must apply this force called the centripetal force.'' When the velocity exceeds its maximum, the rope cannot pull any harder and so it snaps. Immediately, the radial force on the ball vanishes, and its velocity becomes fully tangential. So the ball goes off in a tangent. This entire argument is from the Lab frame.

Centrifugal force is a pseudo force. So, you can only account for it if you are in a non-inertial frame of reference, here, the frame of the ball.

Not the answer you're looking for? Browse other questions tagged newtonian-mechanics forces string centripetal-force centrifugal-force or ask your own question.

4
Rotating a stone with a string