Direction of centripetal force on an object placed on disk

When an object moves in a circle it experiences centripetal force directed towards centre, But when we place an object on a disk which is rotating why does the object moves away from centre instead of moving towards the centre.

RamsayRamsay
322 bronze badges
New contributor
Ramsay is a new contributor to this site. Take care in asking for clarification, commenting, and answering. Check out our Code of Conduct.
$\endgroup$
add a comment  |

Short answer: It is because the centripetal force does not act on the body.

Consider the situation like this. Let us assume that the body is placed on a frictionless groove on a circular disc. Now, if you start rotating the disc, the particle does not feel any centripetal force. Now, consider a point just before our object under consideration.(towards the centre that is).

This means that the particles will separate, not because the body is moving out of the disc, but because the points on the grove are moving towards the centre, away from the body 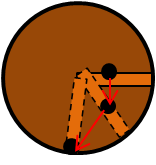 It is not necessary,It is only possible if the frictional coefficient has value less than necessary to provide for the centripetal force, In the case you mentioned the friction coeff. is less thus the object can't have enough centripetal acc. to satisfy the circular locus the disc's periphery undertakes.

Not the answer you're looking for? Browse other questions tagged centripetal-force or ask your own question.