Twin paradox: is the result of the experiment dependent on the motion of the rocket?

1/ I consider that the twin paradox is formulated as follows: "Two people in the universe cross each other, synchronize their clocks at this point in time, continue to travel in the universe and cross paths again. When they meet again, which one has aged faster?"

In that case, is it true to say that there is nothing in the formulation allowing us to answer the question, even if one of the people is called "the traveler"? Only a physics experiment could tell us which one is the "true traveler", that is to say the one who is not in an inertial frame? Furthermore, is it true that both persons could be in non-inertial frames, making the use of SR to solve the paradox very debatable?

2/ If we now consider the classical formulation, with one twin on the Earth, and the other in a rocket. Is it possible to imagine that the traveler is following the path of an object "free falling"?

This point needs clarification. If I assume that the Sun is in free fall in the universe, the Sun is the inertial frame needed to be able to apply the laws of SR to solve the paradox. I can (in thought) consider a little object linked to the Sun through a rigid link, and positioned exactly somewhere on the orbit of the Earth. This object should be, as much as I understand, in an inertial frame.

If we are now considering that the traveling twin is in a rocket (or a satellite) moving precisely like this little object (same position at any point in time), even if the rocket is not itself an inertial frame, the twin in it should (in my opinion) see the same things than those "observed" by the little object (or an observer sitting on the little object).

If that is the case, is it correct to state that the result of the experiment when we consider the Earth and a rocket (both non inertial) depends (theoretically) on the motion of the rocket?

However, it is not granted that the twin staying on Earth is the one in an inertial frame

In fact, the twin staying on Earth is not in an inertial frame due to Earth's gravity (and she is at rest on the surface of the Earth). However, it is usually understood (though rarely explicitly stated) that we ummm... just ignore that.

Now, after reading your question, I have a gut feeling that you're thinking about this along these lines:

Which then leads to your question: "In this case, would the result of the experiment not be the opposite of what is generally stated?"

However, and don't forget, either you ignore gravity completely or you don't. If there's gravity, the rocket at rest with respect to the Sun is not inertial. If there's no gravity, the Earth doesn't circle around the Sun and come back.

If my gut feeling is wrong, then let me know and I'll delete this extended comment.

Update to address comments and to make progress towards completing this answer.

Yes, it is precisely that (and the version with gravity, although I know only SR). However, I do not understand why the twin in the rocket at rest with respect to the Sun (the implicit assumption being that the Sun is a "more inertial" frame than the Earth) would not be in an inertial frame

The Sun's gravity attracts the rocket toward its center. To be at rest with respect to the Sun, the rocket must use its engine to resist that attraction and 'hover' a fixed distance from the Sun.

The twin inside the rocket would also be attracted to the Sun and would thus fall to the bottom of the rocket where she will feel weight standing there.

To see this, if the twin in the rocket, standing on the floor of the rocket, holds a ball in her hand, the ball drops to the floor when she lets it go.

If the reference frame of the rocket were inertial, the ball would remain where it was when she let it go. Stop here to think about this some more if you're not convinced.

I understand your point. However, I can do the thought experiment of a third person being in "free fall" exactly like the Sun but right at the point where the twin in the rocket is. As there is no distance between them, they should watch their watch tick exactly synchronously? But what you say is that they do not share the same time, in reality.

That's not possible. If the third person is in free fall, he cannot remain co-located with the twin in the rocket. If a 'trap door' in the floor of the rocket were to open up where the twin stood, she would fall through the open door towards the Sun, while observing the rocket to accelerate upwards away from her.

She would be in free-fall (inertial, no weight, no acceleration on her accelerometer); if she were holding a ball in her hand and let it go, it would 'float' right where she left it in front of her. But, importantly, she would not be at rest with respect to the Sun.

I've preserved these comments from a thread in another answer since there were to be soon (appropriately) moved to chat by a mod. 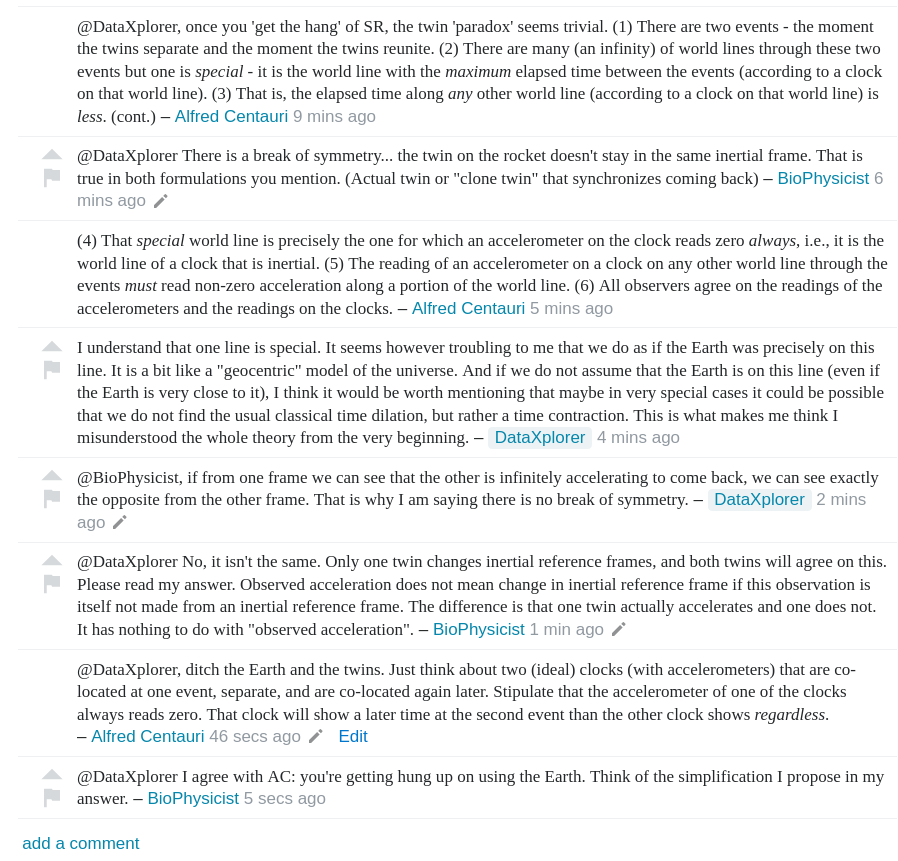