Why are probabilities for each micro-state equal within a micro-canonical-ensemble?

This question is about statistical mechanics:

Why does it make sense to postulate, that in thermal equilibrium all micro-states with fixed U within a micro-canonical ensemble are equally probable?

When I was a student, I focused mainly on the mathematical derivation, and it was clear for me, that this is the condition for maximizing the "degree of uncertainty", so we end up with entropy $$ S = k_B\cdot \ln W $$

with $W$ the number of possible micro-states and the famous Boltzmann result.

Now, years after, when I reviewed my old textbooks, this is not plausible anymore. I could easily image a system made up of two "bins" A,B, each capable to hold 0, 1, or 2 portions of (same) energy of amount 1.

The total energy of the system is 2.

The micro-states are defined by the tuple (a,b), a,b denoting number of portions within A,B, respectively.

In each round those two bins exchange energy portions with probabilities according to this scheme: 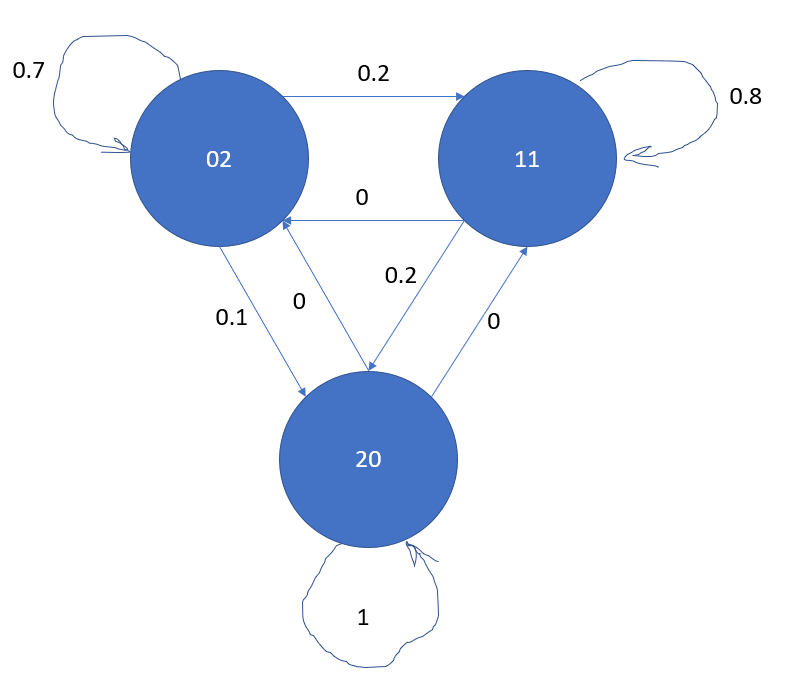 So in this case, the probabilities are not the same for each micro-state.

Are such systems excluded by some subtle physical reason which I couldn't identify yet?

My textbook, on the other hand, doesn't make assumptions, how systems are constructed physically.

Something must be wrong...does it mean, thermal equilibrium is not defined in those cases? But what else is required to justify the assertion?

Let's go back to the standard case of a classical Hamiltonian system. The reason the microcanonical measure is a plausible candidate to describe the equilibrium state of the system is that it is left invariant by the dynamics. Were it not the case, it would be inconsistent to use it to describe a system at equilibrium, as starting the system according to this measure, its distribution would change over time (hence, it would not be be at equilibrium). Of course, there are many other invariant measures. This is one of the reasons that the foundational problem in equilibrium statistical mechanics is still wide open.

(It is easy to characterize reversible Markov chains that leave the uniform measure invariant. In this case, it is necessary and sufficient that the transition probability be symmetric: $p(i\to j) = p(j\to i)$ for all $i,j$.)

So, my point is that a (trivial) necessary condition for the microcanonical ensemble (=uniform measure) to apply to a given system is that it be left invariant by the dynamics, which is not the case in your example.

I think this is a good question and it gets at what statistical mechanics is actually doing when it assigns probabilities to states. In particular, it is not giving you the correct probability to be in any given state. This is even more clear in the fully deterministic case, where the pdf to be in state $x$ at time $t$ is given by $p(x,t) = \delta(x-r(t))$ where $r(t)$ is the solution to the equations of motion of the system.

Your example is similar. You consider a non-deterministic system (a Markov chain) for transitioning between states in some micro-canonical energy window. Standard statistical mechanics says to assign a uniform probability distribution over these states in the absence of other knowledge. However, you have decided to fully specify the dynamics by assigning transition probabiities $T_{ab}=\mathbb{P}(a\rightarrow b)$, where $\mathbb{P}(a \rightarrow b)$ are the probabilities of transitioning from state $a$ to state $b$. This is a well studied problem and there is some steady-state probability distribution that cou can obtain from the matrix $T_{ab}$ corresponding to on of it's (left) eigenvectors. How to do this is not important, the point is that it's typically non-uniform as you observed. How do we square this with statistical mechanics?

Well, one way to deal with this is to require 'detailed balance'. That is, demand that $T_{ab}$ is symmetric. This makes the eigenvector with eigenvalue $1$ a uniform distribution so gives us microcanonical results. I think this is unphysical - systems like yours presumably do exist and I'd expect them to reach thermal equilibrium so long as they are large. My interpretation of what is going on is that for a large number of states, you will not be able to extract useful information out of the Markov model, much like you can't solve (or even use the solution of) the classical deterministic ODEs. Thus, statistical mechanics by maximising entropy is giving you the most reliable estimate you can get without solving the system. In the thermodynamic limit, you'd expect that this becomes strongly peaked in the sense that almost any Markov matrix $T_{ab}$ you can write would agree with the microcanonical prediction for any observable quantity $\langle O \rangle = \sum_a p_a O_a$.

By the way, I would say that "all micro-states with fixed $U$ within are equally probable" is the definition of the micro-canonical ensemble.

The usual explanation is that a physical system is expected to have a symmetric transition probability, i.e., "detailed balance", as noted by Yvan Velenik and jacob1729. Fundamentally this comes from PT invariance (I suggest this is the "subtle physical reason" you seek), which holds in most practical systems. If a system is microscopically irreversible as in your example, that would fall outside standard statistical mechanics.