How does lightning “know” where to go?

If lightning comes down in, say, a large flat field with a lightning rod sticking out of the middle, the lightning will strike the rod.

How does it "know" the rod is there?

Will it always strike the rod? Does it have to be within a certain distance?

Is it to do with the electro-magnetic field of the lightning?

The wikipedia article is quite good on this subject.

For any discharge in the air the molecules of the air must be ionized. This ionization happens during thunderstorms because of the high static electric fields carried by the clouds which generate "streamers", i.e. paths for the electrons to flow downwards. Corresponding streamers are formed by conductors and high points on the ground with positive charge again generated by the high fields of the storm cloud, the positive ions flow upward and the path for a discharge is set. 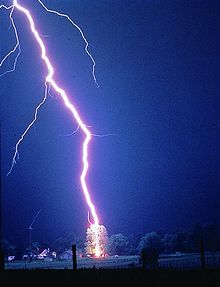 A lightning flash terminates [& discharge occurs] on a tree while an un-attached streamer is visible on the earth surface projection to the left.

When the electric field of the storm passes over the ground, high points that are also grounded have higher fields then the ground and can form streamers. Lightning rods work, by generating upward streamers more efficiently since they are highly conducting and the field at the top is very high due to the geometry.

As negatively charged leaders approach, increasing the localized electric field strength, grounded objects already experiencing corona discharge exceed a threshold and form upward streamers. Once any downward leader connects to any upward leader available, a process referred to as "attachment", a circuit is formed and discharge may occur. Photographs have been taken on which unattached streamers are clearly visible. The unattached downward leaders are also visible in branched lightning, none of which are connected to the earth, although it may appear they are.

Once a channel of ionized air is established between the cloud and ground this becomes a path of least resistance and allows for a much greater current to propagate from the Earth back up the leader into the cloud. This is the return stroke and it is the most luminous and noticeable part of the lightning discharge.

When the electric field becomes strong enough, an electrical discharge (the bolt of lightning) occurs within clouds or between clouds and the ground. During the strike, successive portions of air become a conductive discharge channel as the electrons and positive ions of air molecules are pulled away from each other and forced to flow in opposite directions.

The electrical discharge (averaging 30 kA for negative or 300 kA for positive lightning, and travelling at around 1×108 m/s) rapidly superheats the discharge channel, causing the air to expand rapidly and produce a shock wave heard as thunder. The rolling and gradually dissipating rumble of thunder is caused by the time delay of sound coming from different portions of a long stroke

The answer to this question can be found by a high speed camera. Actually before the main strike the electricity travels toward the earth in many random paths like many random walkers. As soon as a path found to the earth the big strike happens exactly through that special path. So indeed the lightning doesn't know where the rod is, it searches to find it. Watch this youtube video to see the the random walk through a high speed camera.

Not the answer you're looking for? Browse other questions tagged electromagnetism electricity electric-fields lightning or ask your own question.

3
Nature of electricity
23
Why is the shape of lightning or an electric spark a zig-zag line?
0
Travel direction of lightning