The Wu experiment is the first experiment to prove parity violation of the weak interaction. In the experiment, ultra-cold cobalt-60 atoms are aligned in a magnetic field. The cobalt-60 atoms decay to excited nickel-60 atoms by the weak force under the emission of an electron and an electron-antineutrino. The excited nickel-60 atoms emit photons. The angular distribution of the photons is used as a reference for the angular distribution of the emitted electrons.

The Wikipedia article on the Wu experiment claims:

The resulting nickel nucleus, however, is excited and promptly decays to its ground state by emitting two gamma rays (γ)

At the same time, the Wikipedia article on the Gamma ray states that the two photons are emitted sequentially: 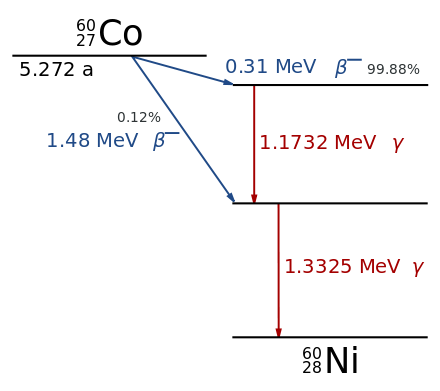 How are these two statements compatible?

The emission of a photon in an atomic transition follows an angular distribution. For the simple hydrogen atom, the angular distribution is the product of the harmonic functions of the initial and final state times the spatial coordinate expressed in spherical coordinates. For the nickel-60 transition, we would expect a more complex radiation pattern because of electron-electron interactions.

In both cases the emission direction is non-deterministic. It is not clear if there is any correlation between the first 1.17 MeV and the second 1.33 MeV gamma ray emission in terms of the angular distribution.

Furthermore, how is angular momentum conserved if the photon has spin one, but according to the Wikipedia article on the Wu experiment the excited state of the nickel-60 atom loses only one unit of total angular momentum during the photon emissions?

Why is it still. valid to use the angular distributions of the two gamma rays for normalization of the electron anisotropy?

The angular correlation for 4-2-0 quadrupole-quadrupole transitions is:

In electromagnetic nuclear decay, if the initial state has spin $J_i$ and the final state is $J_f$, then the photon can carry away $l$ units of angular momentum, with $l \ne 0$ and:

The radiations is referred to a $2^l$-pole transition, so in this case, both transitions are $l=2$, or quadruple radiation.

Not the answer you're looking for? Browse other questions tagged electromagnetic-radiation atomic-physics weak-interaction parity or ask your own question.

3
Is there a list of all atomic electron state transitions and the corresponding radiation emitted?
59
What are the various physical mechanisms for energy transfer to the photon during blackbody emission?
4
Decay of metastable state: spontaneous vs. stimulated emission.
2
Emission of Characteristic X Rays
2
Can photons be created without an electric charge involved?
13
Why don't absorption and emission lines cancel out in our Sun?
3
How does mass-energy equivalence work differently in nuclear decay where there is nucleus excitation?
1
Absorption and emission of photons
2
Energy Levels: Reflection or Absorption and Emission / Color of Objects and Emission Spectrum
1
Friction in photon absorption/emission process