Why isn't the surface of this frozen iced tea smooth?

Why is the surface of the iced tea in the pictures below so uneven?

To give more details, today I tried (and failed) making iced tea.
I placed a cup of hot water, after removing the tea bag, in my refrigerator's freezer (so that it will cool quickly). Naturally, I forgot all about it.
A few hours later I opened up the freezer. The tea was frozen, and its surface was very uneven.
The fridge and the cup were still at all times (and we only opened the main compartment of the fridge).
I couldn't think of any reasonable explanation as to why it froze that way. 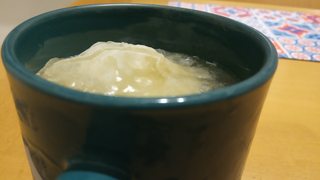 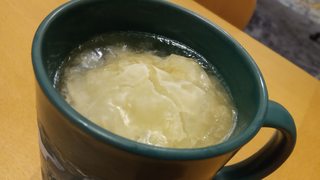 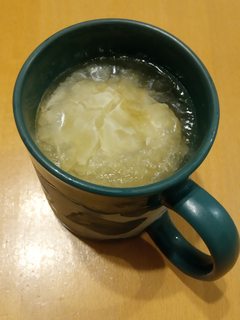 Before we explain what happened to your iced tea, we need to know about three things. 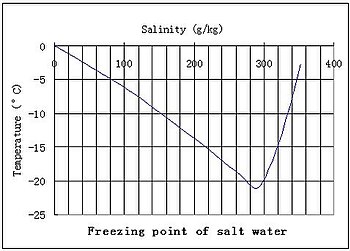 This property is a colligative property, which means that it depends only on the number/concentration of the solute particles and not on the nature of the solute. Mathematically,

where $\Delta T_{\text{f}}$ is the decrease in the freezing point, $K_{\text{f}}$ is a proportionality constant known as the cryoscopic constant which depends on the solvent and $m$ is the molality of the solution.

Mountain formation: (yes, you read that right!) For our purposes, we only need to know the basics of how mountains form. So, the basic idea is that when two tectonic plates are pushed towards each other, they have no option other than extend in the vertical direction, as you'd expect. The GIF from Wikipedia really gives us a nice feel of how the Earth's surface rises up:

For more information, check out Wikipedia's page on mountain formation.

Ice has lesser density than water: Thus when water freezes, its volume increases, or in other words, it expands. Nothing much to explain here.

Alright, now we have all the essentials to start explaining what you saw. But before we start, let's first make a few observations, which will help us guide our line of thought.

First of all, the most evident observation is that the tea extract is concentrated somewhat in the center of the cup, whereas the boundary is mostly frozen water with comparatively lesser tea extract in it.

Second (easy) observation: although the surface is uneven, still it is always above the level of the boundary. In other words, all the points which are off the baseline, have only gone up, none of them have gone down.

Finally, the volume of the frozen mass in the current cup is more than the volume of the liquid tea before it froze. This somewhat explains our second observation, because the increase in volume has to be manifested somewhere, and that "somewhere" is the rocky surface of your frozen tea.

So when you put the hot tea into the freezer, the temperature of the water started going down. You'd expect it to freeze at 0°C, but it doesn't, because it contains a non-volatile solute (the tea extract) which lowers its freezing point. So, after the temperature drops down a bit below 0°C and we attain the freezing point of the "solution", the water starts freezing. However, when water freezes, it leaves behind the solute particles it contained, and thus these particles go into the remaining liquid. Thus the remaining liquid gets even more concentrated, and thus its freezing point drops down even lower than before. So again, as this new freezing point is attained, the above process repeats on and on. This process occurs outside-in, meaning that the outer layer of water freezes before the inner layers. This process is very similar to fractional freezing.

Slowly, as the above process repeats, the tea extract starts becoming more and more concentrated, and thus starts becoming gummy, somewhat similar to our earth's surface. Crystallization starts occuring in the gummy mass. While this is happening, we simultaneously notice another effect of the freezing of water: the increase in the volume of the freezing water (as it becomes ice). This results in an inward push on the concentrated gelatinous mass of tea extract from all directions. And, here comes the mountain formation part. As we discussed above, this surface also curls up to form tiny mountains, in order to compensate for the increased volume. You might be skeptical about the fact that the surfaces of the iced tea and the Earth are, in any way, similar, but they are. In fact, during rock formation, something similar happens, and it is termed fractional crystallization.

So indeed, the uneven surface gets formed, with most of tea extract concentrated in the center, because the outer layers were frozen initially and thus are devoid of any solute particles (do note that the process started with freezing, however it ended with crystallization, and in between, both the processes occurred simultaneously).

Thus the above explanation satisfactorily explains all the observations as well as provides an accurate picture of what happened inside the freezer.

You could try doing this experiment with any non-volatile solute and you would get almost similar results. For instance, try repeating the experiment with a saturated sugar or salt solution. It is very likely that you would see the same pattern. So no, iced tea is not a special liquid which exhibits this fascinating property. Also, if you remove the iced tea from the freezer at the correct time, then you'd be able to see the gelatinous mass of the tea extract separated from water and this is the principle behind fractional freezing. What you did was that you went ahead of the standard time required for fractional freezing, and kept the solution (iced tea) in the freezer for a longer period of time, which resulted in the crystallization of the tea extract. That's it!

Not the answer you're looking for? Browse other questions tagged everyday-life material-science home-experiment ice freezing or ask your own question.

8
Why does frozen water burst a pipe?
8
Why did my frozen water bottle explode when I opened it after it defrosted a bit?
0
Why does only the surface of water get frozen in polar countries?
5
Why isn't ice a good electrical conductor?
14
Why does hitting a cold bag of water freeze?
5
Frozen Pepsi when opened began to fizz and release lots of $C O_2$ and a thick sugar syrup mixture
28
Why are some parts of this ice block cloudy and other parts clear?
3
What is wrong with our Cloud chamber setup?
16
Why does pouring tea to a plate make directional jets?