What happens to an inductor if the stored energy does not find a path to discharge?

Suppose an inductor is connected to a source and then the source is disconnected. The inductor will have energy stored in the form of magnetic field. But there is no way/path to ground to discharge this energy? What will happen to the stored energy, current and voltage of the inductor in this case?

Suppose an inductor is connected to a source and then the source is disconnected. The inductor will have energy stored in the form of magnetic field. But there is no way/path to discharge this energy?

Short answer: It will find a way/path to discharge this energy.

Let's have this simple electric circuit consisting of a battery (voltage $V_0$), a switch, a resistor (resistance $R$), and an inductor (inductance $L$). 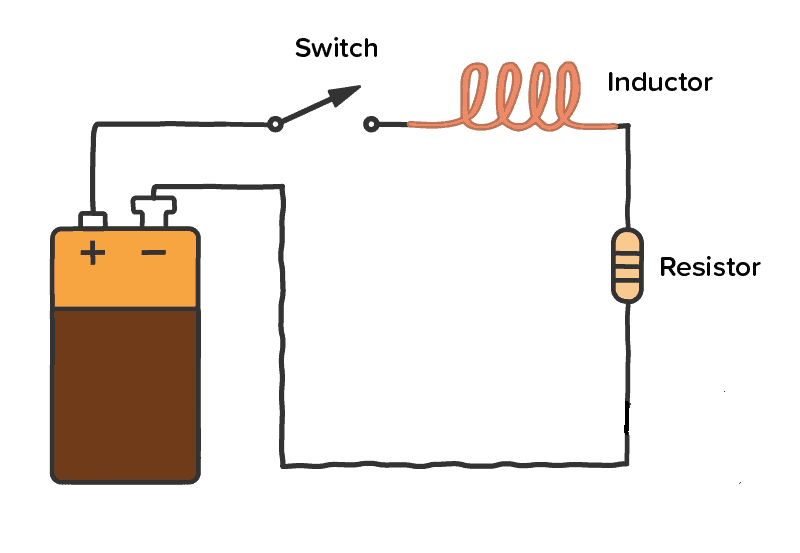 (image from build electronic circuits - What is an inductor?, slightly modified by me)

After closing the switch there will be soon a steady state, with a current $I=\frac{V_0}{R}$ flowing. The magnetic energy stored in the inductor is $E=\frac{1}{2}LI^2$.

When the voltage across the opening switch reaches several 1000 volts, the air between the contacts of the switch gets ionized and becomes an electrical conductor. According to "Electrical breakdown - Gases" air begins to break down at 3000 V/mm. You will actually see and hear a spark in the switch. 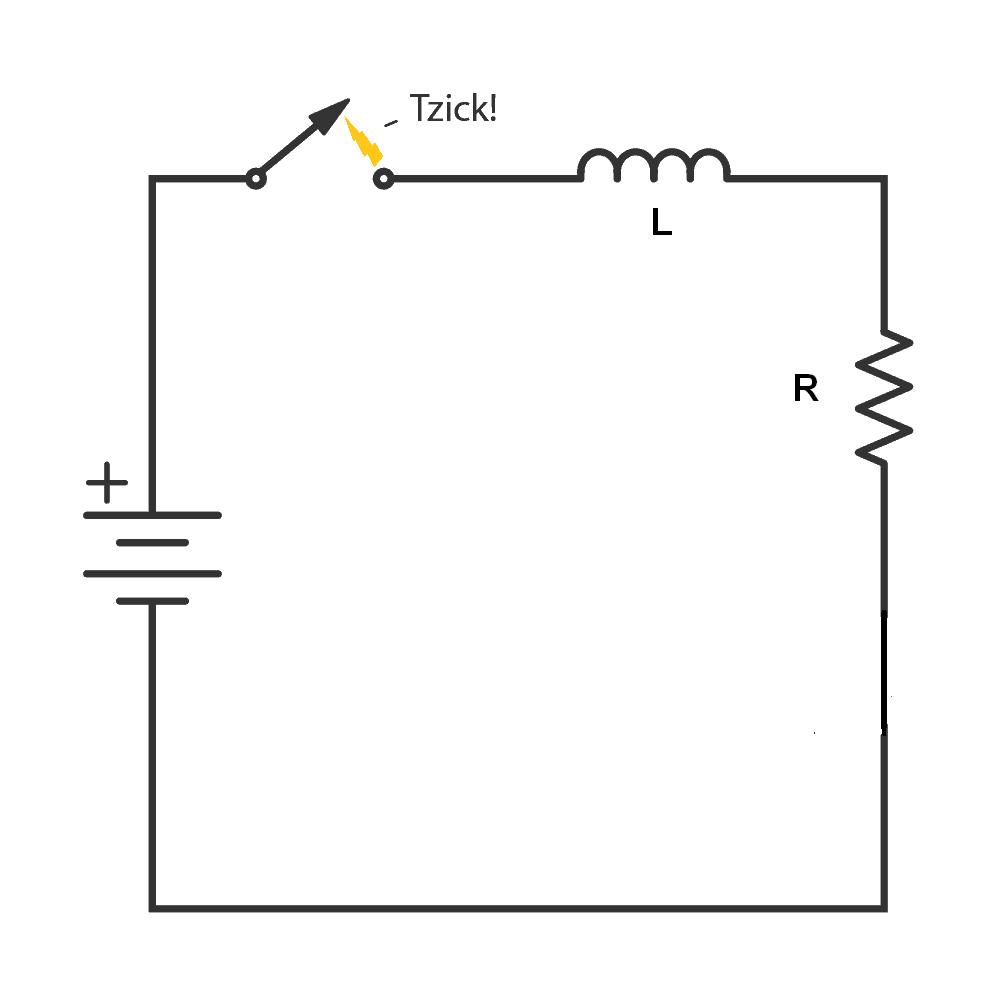 (image from build electronic circuits - What is an inductor?, slightly modified by me)

What will happen to the stored energy, current and voltage of the inductor in this case?

For some milliseconds the current continues to flow across the already opened switch, passing through the ionized air of the spark. The energy stored in the inductor is dissipated in this spark.

Summary: An inductor doesn't "want" the current to be interrupted and therefore induces a voltage high enough to make the current continuing.

You cannot disconnect an ideal inductor from an ideal voltage source with an ideal switch. These ideal things will break your calculations and you will get an infinite voltage on disconnect.

A real inductor has its coil resistance, a capacitance between coils and an insulation between coils that has some great, but pretty much nonlinear resistance (and some more things that make it nonideal, like parasitic indctive and capacitive couplings to other objects around).

If you manage to switch it off without much of a spark, it will do one of these two things (or both):

The first point happens always - no matter if you consider some conducting object as inductor, or not. If you are unlucky to have some switching inductance around some radio communication equipment using a frequency near the inductor's parasitic oscilation, you may get an interference.

The second one happens sometimes. It is a common failure mode for a relay or motor coils.

But there is no way/path to discharge this energy? What will happen to the stored energy, current and voltage of the inductor in this case?

In that case it makes its own circuit with its own path to ground. Often, that is through dielectric breakdown at the switch itself, but the details are highly unpredictable and depend very sharply on environmental conditions. So the breakdown can occur elsewhere.

An inductor has a voltage that is proportional to the rate of change in its current. An arbitrarily high rate of change of current produces an arbitrarily high voltage. That high voltage can overcome insulation and create a dangerous path to ground where there should not be one. Circuit breakers that are designed to operate with high currents and inductive loads need to be very carefully designed.

Usually this extra energy creates a spark due to the high back emf produced. But it is not always possible for a coil to create sparks. It is clear If we try out the experiment.

So what happens to the magnetic energy if no sparks are generated?

firstly, The sudden switching off would create a potential. difference between the ends of the coil. This means that the negative charges in the wire are now at one end and positive charges at the other end. This is not an equilibrium configuration and then, since the electrons in the metal are free to move, the charges redistribute in the wire, nullifying the potential difference. Now the coil stores no energy.

So where did the energy go? Part of it goes as thermal motion during redistribution of charges. This would be negligible in case of an Ideal Inductor with no resistance. (only loses due to entropy would be present)

Also, Now as the electrons redistribute, they send a current which produce a magnetic field again. As it would be clear, charges within the inductor are now oscillating. since there is a varying electric and magnetic field, some part of the energy comes out as electromagnetic waves. When all of the initial stored energy is converted into radiation, no more. potential differences are created and inductor can be called discharged

An important point which is somewhat addressed by others but perhaps not clearly enough is (quoting Scotty) "Y' canna break the laws of Physics".
You can make everything ideal - semiconductor wire, perfect instantaneously acting switch, infinite insulation - and the basic "rules" governing an inductor still apply.

The fact that current flow cannot instantaneously change in an inductor is part of the fundamental definition of what it is. IF it take infinite voltage for this to be satisfied, so be it.

In practice there are enough non-idealities available to 'sort things out'.
The area of final recourse is mentioned by fraxinus - energy storage in stray or interwinding capacitance. Even an ideal inductor has capacitances associated with it and you will see 1/2.L.i^2 energy redistrubted into 1/2.C.V^2 energy. If there is little or no resistance you will see oscillations as energy is dissipated over longer than a resonance cycle - in the form of electromagnetic radiation if no other means exists.

In real world situations you will usually see some or all of spark, insulation break down, resistive dissipation, electromagnetic radiation and resonance.

Where circuit topography allows it is common to add a diode across the inductor to allow the current to 'circulate' and dissipate energy in the winding resistance. Faster dissipation is often achieved by adding a resistor in series with the diode - initial voltage across the resistor is V=IR and you immediately get decaying I^2R losses. Other means of dissipation include a zener diode (similar to adding a resistor, a series RC "snubber" circuit (allowing resistive dissipation of AC but no DC path) or energy return to a power supply rail.

The inductor becomes an active inductor. The energy is still stored in it, and the total flux it produces remains the same.

If you connect it to another circuit, (Say, with just a resistor), it will momentarily act as a source of current i.e. the first current that flows through the circuit will be the same as the one that last flew through it (to maintain the flux) $$\Phi=LI$$

An inductor contains a magnetic circuit. Changing the magnetic flux through it induces voltage in the coils that, if it is allowed to develop into a current, builds up until the produced current compensates the flux change. Separating the circuit blocks this process. Without the regular release of the magnetic energy through the coils, the magnetic circuit will act as an oscillator that converts the energy of its magnetic field into an electric field containing the same amount of energy, then convert this back to a magnetic field with opposite polarity and so on. So instead of diverting the energy through the electrical connections, it will be radiated as electromagnetic radiation.

So where is the problem? The problem is that the electric field around an inductor is much much less efficient at containing large amounts of energy than the magnetic field is. That means that when the energy is being converted from magnetic to electric, there will be humongous voltages adding up on the coils that, in general, the coils are not designed to withstand without arcing and that the rest of the circuit is less than happy to deal with.

So in short, physics does not break down, but the ideals of an ideal inductor break down. It emits energy in a manner it hasn't been designed for (electromagnetic radiation) and does that while creating monstrous voltages.

Physics rather than electrical engineering. Put a flyback diode in, and you are back to engineering.

The current will flow back and forth between the end points of the wire after the potential difference is removed. It is like a wave traveling back and forth on a string. This is because all of the electrons are behaving as one wave (wave function) in the superconducting regime. If there is no heat loss this will cont. forever. In reality, electron standing wave on the string will damp out eventually. It will behave like an antenna and it will radiate its initial energy as an EM wave.

If the coil is in a perfect vacuum, then the unduced voltage may become so high that "cold" electron emissions of the coil metallic ends will create an arc for discharge.

A fine example of the stored energy of an inductor used to generate a useful voltage, is the ignition coil in petrol engines. When the points open the current in the primary cct. of the ignition coil, the magnetic flux rapidly collapses as the magnetic energy is converted to electric field energy in the intrinsic capacitance of the primary winding's. To prevent the rapid rise in voltage across the points from creating a spark, a capacitance is added across the points. This capacitance is chosen to reduce the natural sinusoidal resonance in the coil to a frequency such that the rate of voltage build up across the coil rises sufficiently slowly to allow the points to open wide enough to prevent arcing. The choice of the capacitance also limits the peak of the sinusoid to approx. 400 volts. The secondary winding of the coil has about 60 times more turns than the primary. the sinusoidal flux in the primary is shared by the secondary so the secondary will have 60 times the primary voltage developed across it this equates to 24 thousand volts. The result is a damped oscillatory waveform in the several 10's of kilohertz range. Once an arc is formed at the spark plug, all the energy is dumped into the spark.

Not the answer you're looking for? Browse other questions tagged energy electric-circuits electromagnetic-induction inductance or ask your own question.

5
Where does the energy stored in inductor go on opening the switch?
1
Sparks in a self-induction circuit
0
Significance of sliding switch in a LR circuit