How can heavier elements be made from hydrogen atoms?

I understand that standard hydrogen atoms are made up of a proton and an electron (no neutron), while other heavier elements require neutrons.

So is it possible to create heavier elements from nothing but hydrogen? How?

Saying "We" could do it is probably a bit ambitious, but stars collect hydrogen from space in gravitational collapse, and form into natural fusion reactors. The first step in stars like the Sun is the pp-n chain (diagrams from Structures of the Sky which contains more details), which creates helium from hydrogen 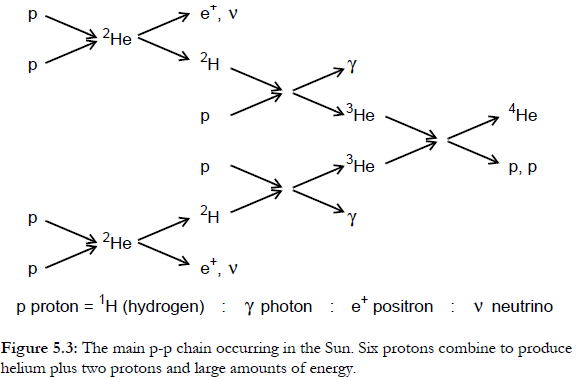 Variants of this process dominate in larger stars. In stars of mass greater than about 1.3 solar masses, the CNO cycle dominates. This is a catalytic process, in which protons are added to an atomic nucleus, which then decays releasing Helium.

The alpha ladder adds further helium nuclei to create a range of heavier elements, known as alpha elements whose most abundant isotopes are integer multiples of four, the mass of the alpha particle or helium nucleus. The alpha ladder starts with carbon-12 and produces oxygen-16, neon-20, magnesium-24, silicon-28, sulphur-32, argon-36, calcium-40, titanium-44, chromium-48 terminating at iron-52 since the further fusion of alpha particles consumes energy. This is the reason for the abundance of iron in the universe. Interactions above oxygen contribute little to the energy produced by stars.

These are the main processes in stars. Other elements can be made in less common processes, and in supernovae.

The first step in the process is to create helium. Here's how the Sun and many other stars do it: Proton-proton chain reaction.

It's thanks to the weak nuclear force. Protons can turn into neutrons and vice-versa through weak force interactions.

The neutron is more massive than the proton, so free neutrons decay into protons (accompanied by an electron and an anti-neutrino). However, neutrons can be stable to beta decay when trapped in nuclei with other nucleons and this offers the possibility of protons turning into neutrons via the inverse process - electron capture or the emission of a positron.

The latter is the dominant process in stars, but the former might be easier if one were to do it artificially. It would require compressing the hydrogen to densities of around $10^{11}$ kg/m$^3$, but would have no temperature constraints. At these densities, the electrons would be degenerate and the Fermi energy would be high enough to initiate electron capture with the protons. The free neutrons would then react with protons to produce deuterons. The positron emission route has to proceed via the intermediary of an unstable di-proton. This requires very high temperatures to form and along with the improbability of a beta decay occurring whilst the di-proton exists, is why hydrogen burning is slow in the Sun.

9
Where does the energy from a nuclear bomb come from?
36
What is the origin of elements heavier than iron?
15
Where does the energy produced by fusion come from?
12
Why is Helium-3 better than Deuterium for fusion energy production?
0
Are known (“old”) elements being made synthetically using fusion?
2
Does fusion continue to happen as a star collapses into a black hole (beyond our view)?
1
In fusion inside stars (sun) or very hot gasses, how do the electrons get bound and what about tritons and $D$-$T$ vs $D$-$D$ fusion?
2
What is the extreme long-term elemental composition of the universe?