How Do I Calculate the Score of a Bell's Game

I am reading "Quantum Chance" by Nicolas Gisin. I would like to know how to calculate the Bell Game outcome given in the following section of the book.

The Bell Game begins with a pair boxes. Alice and Bob each have a box with a joy stick that can move either left or right. This leads to four combinations of joystick positions(Alice/Bob): L/L, R/L, L/R, R/R. At the front of each box is a screen that displays either 0 or 1 every time they move their joystick. A hypothetical move looks like the following. Alice moves her joystick to the left and sees the number 1. Bob moves his joystick to the left and sees the number 0. They record these outcomes and later come back to compare notes.

It can be shown that if the world were limited to non-quantum effects, the maximum score one could achieve is a 3/4.

Bell's games are meant to demonstrate how entanglement allows Alice and Bob to achieve a score over 3. They achieve this by using a pair of entangled qubits.

We attach the joysticks to a measuring device and perform the following experiment:

First we create a large number of entangled qubit pairs. For each pair, we give one qubit to Alice and the corresponding qubit to Bob.

Second, Alice and Bob measure the qubit by moving the joystick either left or right.

When Alice makes a measurement on her qubit, she generates either 1 or 0. Because of entanglement, Bob's qubit now shares the same state as Alice's. By making a measurement similar to Alice's measurement, he has a high chance of measuring the same value (either a 1 or a 0). Note, the measurement is similar - but not the same - because Bob's device was rotated. This means that there is still a chance that Bob measures a different value than Alice. 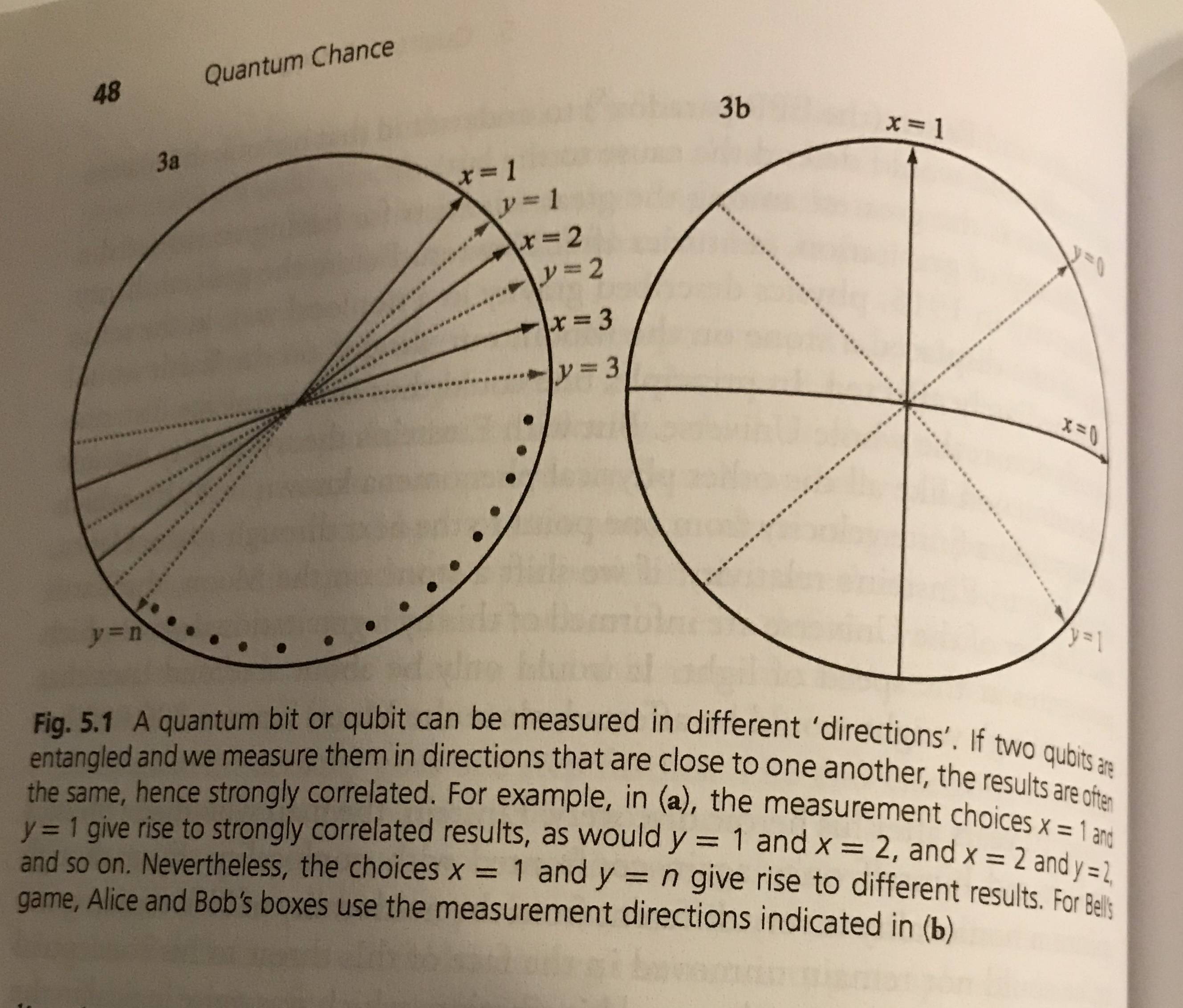 With the arrangement on the right side of the photo, Alice and Bob should achieve a score of ~3.41.

But I do not see how the author arrived at the value of ~3.41. Can someone explain how I would go about calculating this value?

This "Bell Game" is just the famous CHSH game. It was rather unfortunate that Gisin didn't use the regular name, as it makes it much harder to search information about it. It is explained here, for example, or here, or here.

There is no easy way to calculate the quantum "score", you need to use quantum mechanics. Let me first rephrase the game a bit, though, so that the answer makes sense. The game is played between Alice and Bob and a referee. The referee sends a question to Alice and Bob (the position of the joystick, in Gisin's exposition, L or R), and they send back an answer to the referee, either 0 or 1. Alice and Bob win the game if they manage to send the same answer whenever the questions are L/L, L/R, or R/L, and different answers whenever the questions are R/R. The "score" of the game is the probability that Alice and Bob win the game, assuming that each possible question is sent with the same probability.

Not the answer you're looking for? Browse other questions tagged quantum-mechanics quantum-information quantum-entanglement quantum-computer bells-inequality or ask your own question.