Can one capacitor charge another connected by a single lead only?

My instructor presented the following problem on capacitors:

Plates 1, 2, 3, and 4 form two parallel plate capacitors as shown. Plates 1 and 2 are charged, plates 3 and 4 are not. Both pairs of plates are separated by distance d. 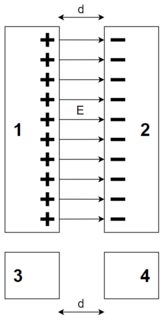 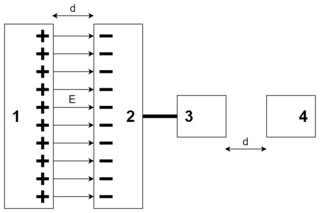 I was unsure so I performed a quick experiment with two capacitors.

So I answered that plates 3 and 4 would not become charged at all.

Unfortunately, that was incorrect. The instructor says that plate 3 will have the same amount of positive charges as plate 2 has negative charges and since plates 3 and 4 have a smaller area, the electric field between them will be bigger.

I don't see how the second set of plates can become charged without forming a circuit. This question looks similar, and in that case one capacitor would not charge the other until the switch is flipped completing the circuit.

What am I missing here? Is my experiment with the capacitors not representative of the problem?

If 3 is connected to 2 as shown on the second drawing, there will be some transfer of negative charge from 2 to 3, because in that region between 2,3 there is initially some residual electric field due to the fact the negative plate is closer than the positive plate.

But if dimension of the plates of capacitor 1-2 is much larger than their distance $d$, this charge transfer will be much smaller than charge on the plate 2 and can be neglected. This is so in your experiment, where the capacitor has plates so close the electric field outside is so small that it is negligible and does not lead to any appreciable charge transfer.

Not the answer you're looking for? Browse other questions tagged homework-and-exercises electric-circuits electric-fields charge capacitance or ask your own question.

0
Will there any modification happen?