Dipoles in 2D and 'dipolar line'

The exact solution of a 2D cylinder with dielectric function $\epsilon(\lambda)$ turns out to be analytically tractable. It turns out that boundary conditions on the surface of the cylinder can be exactly satisfied by considering the superposition of the external field $E$ with an induced dipole centred at the origin, as depicted in Figure 1.3b. 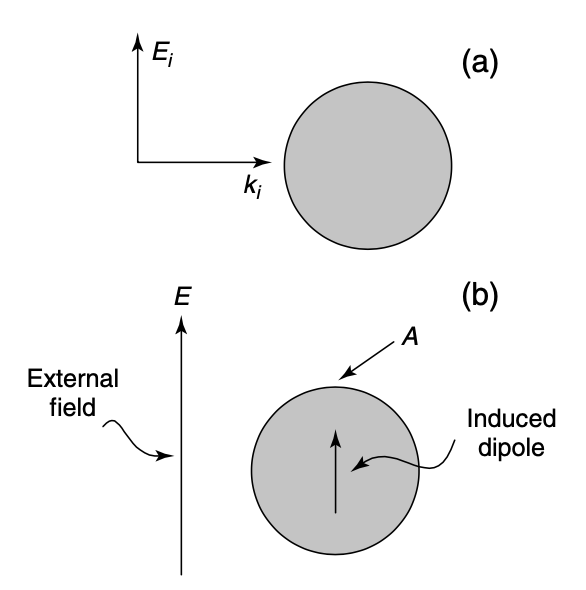 Figure 1.3 (a) A cylindrical metallic object is impinged by an electromagnetic wave coming from the side with wavevector $k_i$ and polarization $E_i$ (on the plane of the page). (b) When the object is small compared to the wavelength ($\le 10-20 nm$), it is possible to gain some insight into the situation by solving the problem electrostatically (i.e. in a constant electric field in the direction of the polarization and with no wavevector present). The boundary conditions at different wavelengths ($\lambda = 2\pi c / \omega$) are still specified by ($\lambda$), and can be fulfilled exactly at the surface of the cylinder by considering the superposition of an induced dipole and the external field (Equation 1.4).

As far as points outside the cylinder is concerned then, the electric field looks like the superposition of this dipole ($p$) at the origin and the external field. We shall not go into the details of the solution of the electrostatic problem to keep the mathematical aspects to a bare minimum, but rather only mention that the magnitude of the induced dipole satisfies the boundary conditions and solves the electrostatic problem is proportional to

Dipoles in 2D are more complicated than standard dipoles in 3D. Note that it should be described more formally as a 'dipolar line' (in the direction perpendicular to the page as shown in Figure 1.3) rather than a dipole.

It is this last part the I am curious about:

Note that it should be described more formally as a 'dipolar line' (in the direction perpendicular to the page as shown in Figure 1.3) rather than a dipole.

It wasn't clear to me what was meant by this 'dipolar line' concept. I would greatly appreciate it if people would please take the time to carefully explain this to a novice such as myself.

Not the answer you're looking for? Browse other questions tagged electrostatics electric-fields dielectric dipole or ask your own question.

0
Are muscle cells electric dipoles?
0
Variation of electric field with volume of dielectric in space
1
Solving the potential function for a Dielectric Sphere in a constant Electric Field
3
Feynman's calculation of surface charge density in a dielectric: is the surface polarization charge a true an electric charge?
3
Fields $E$, $D$ and polarizaton $P$
1
Complex dielectric function and normal reflectance
1
The physics behind DC voltage derating of capacitance
1
Induced electric field in a dielectric material moving in a magnetic field
1
Laplace's equation in presence of a dipole