Doppler effect of light when it's windy

I think I understand the classical doppler effect in sound, where the equation is non-symmetric whether the source of the observer is moving because the speed of medium where sound wave propagates is different according to each of the observers.

I think I also understand why doppler effect is symmetric with light since the speed of "the medium" where light propagates is the same for both observers, meaning we need special relativity to explain the doppler effect of EM waves in a vacuum.

But I struggling to make an eqution to describe the doppler effect of light in an actual realistic moving medium.

What is the frequency shift of light between the source and the observer if wind is blowning at 1/3 of $c_0$, flowing towards the observer.

I have to somehow take in to effect the slowdown of light, the lenght contraction of space as well as the fact that for two observers, the light is now travelling at different speeds. The source is here glowing his laser beem in a lenght-contracted medium. It gets even stranger if you change the wind to water and assume the water is moving faster than the speed of light in water.

On a nano-level, the slowdown of light is caused by the delay in absorption and emmitance speeds of photons in. If the wind is blowing, it is moving those tiny photon-emmiting molecules in space thus causing a classical doppler shift as well.

I have to somehow take in to effect the slowdown of light, the lenght contraction of space as well as the fact that for 2 observers, the light is now travelling at different speeds.

I know this looks a little messier, but you can just plug in the refractive index to get the final velocity in whichever medium you want.

Users PNS and Dale contributed heavily towards answering a solution, but didn't actually answer the question which was "What is the frequency shift..."

I know now that I have to add speeds with the relativistic formula for speed addition when it comes to relativistic speeds, but I did not know to which Doppler equation I have to insert these speeds.

So here is what I've came up with: 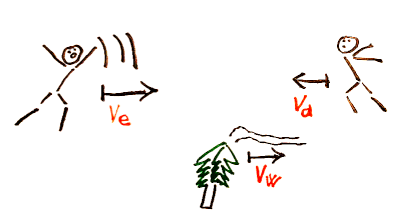 Classical Doppler formula is usually used for sound, but it is also frequently used for radio-waves traveling through vacuum (although the equation is further simplified with the first order Taylor series).
If I also want to include the speed of wind relative to me, an outside observer, the formula looks like this:

But how am I going to add the medium in it?

It is true, that if I just replace the $c_0$ with $c_s$, the accuracy of the relativistic Doppler formula increases, but lowering the $c_s$ in the relativistic formula brings another problem:

Relativistic Doppler formula is only accurate when all speeds are much smaller from the speed of light in the vacuum. And if I use the the $c_0 --> c_s$ hack, it's accuracy decreases as soon as any of the speeds come close to the speed of signal in the medium. $v_e, v_a << c_s$ must hold to use this equation.

Because my original question was about signal traveling in water, where light travels 25% slower than in vacuum, neither the Classical nor the Relativistic Doppler are good enough approximates because both are contributing to the end result. So I have to somehow use both.

Luckily I've come about this article which describes the general Doppler for any speed derived from relativistic Minowski diagram. It is exact for any speed as long as they are such that they don't produce any shockwaves. If they do, the frequency becomes negative, and that can either mean that the Absorber is moving too fast from the Emmitor for the signal to even reach him or that the Emmitor is traveling so fast in the medium that he would reverse the signal (and overtake it).

The general Doppler formula from mathpages.com looks like this:

All I have to do now is modify it in a way to incorporate the change of signal speed due to the medium moving (wind blowing).

And because my question was about the frequency shift when both the observer and emitter are stationary, I enter zero for $v_e$ and $v_e$ and I get:

There is no Doppler effect when the speeds of emittor and absorber are the same. 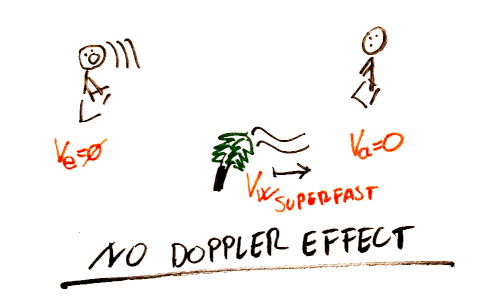 URL for Desmos graph to play with

Not the answer you're looking for? Browse other questions tagged special-relativity speed-of-light doppler-effect or ask your own question.

2
The Doppler effect in a medium like air (sound) versus the electromagnetic Doppler effect
6
Why same formula describing Doppler effect in the case of light in different situations?
2
Doppler shift equation results in inconsistencies
2
Doppler Shift when Light Travels Through Two Different Mediums
3
Doppler effect differs when the entity moving is different
0
The Doppler Effect Relating to Light
0
Doppler and Speed of light
0
Which Doppler formula if light were to travel at non-relativistic speed?