Why do people fall over while cycling in a straight line and leaning to one side? 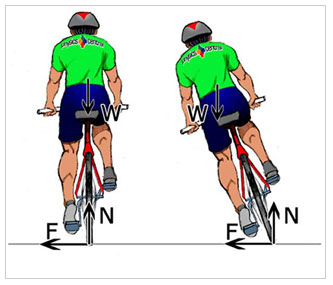 If I cycle and lean to one side (left in this case) while making a turn according to this website, I won't fall because "the frictional force also produces a clockwise torque that will cause the rider and bicycle to tip clockwise to the right.", this seems right.

However in case I'm cycling in a straight line without turning while leaning to the left, in this case as the case before there should be a clockwise torque generated by frictional forces that prevent me from falling however in real life example I see this is not the case and people are falling over, why?

There are actually several questions wrapped up in what you have asked. If you don't mind, I'd like to sort them out, and tidy them up a bit:

A bit of a thought experiment will sort all this out:

these two facts show you that when you lean into a curve on a moving bicycle, one of the forces at work is the gyroscopic action of the moving bicycle wheels. They are turning, and they experience friction and torque (in several directions). But they also have to obey the rules of angular momentum, which ultimately results in the bicycle turning direction rather than falling. A stationary bicycle wheel isn't rotating, and doesn't have the additional rules of angular momentum to deal with.

These two facts show you that friction is at work in a bicycle's behavior, and that the rules of momentum can be overcome by enough torque to the left or right.

Young children and other inexperienced bicycle riders have quite mastered the juggling act of managing friction and angular momentum well enough to avoid situation #3 above, and they fall over sometimes. Wild, raucous maneuvers like I used to do when I was a kid may result in situation #3, or even #4 above :-)

I guess there is a slight mistake in the diagram.

If the bicycle is not turning, then the friction will because there is no tendancy for relative motion in the horizontal direction (towards the left, that is).

So all that exists is a couple-the Normal force and weight with two different lines of action, hence causing the rider to fall.

In case a force due to friction existed as seen in the figure, the path of the cyclist would obviously curve leftwards- no longer satisfying the straight line condition

Not the answer you're looking for? Browse other questions tagged newtonian-mechanics rotational-dynamics friction everyday-life torque or ask your own question.

18
Does leaning (banking) help cause turning on a bicycle?

18
Does leaning (banking) help cause turning on a bicycle?
2
Falling off a chair, how best to save yourself
11
The direction of frictional force in smooth rolling motion
1
Torques when on a bicycle
1
How can you take torque about an accelerating point that isn't the center of mass?
0
How to judge direction of motion?
0
Is the kinetic frictional force required to turn a wheel?