Doubt in using the train example used to show simultaneity

The classic example used to demonstrate the breakdown of simultaneity is a train car in which a source $C$ is at the centre of the train, with a receptor $A$ at the back of the car, and receptor $B$ at the front, located equidistant from $C$ in the train frame. The source emits a couple of photons towards the receptors.

From the point of view of a platform observer, the following spacetime diagram is presented: 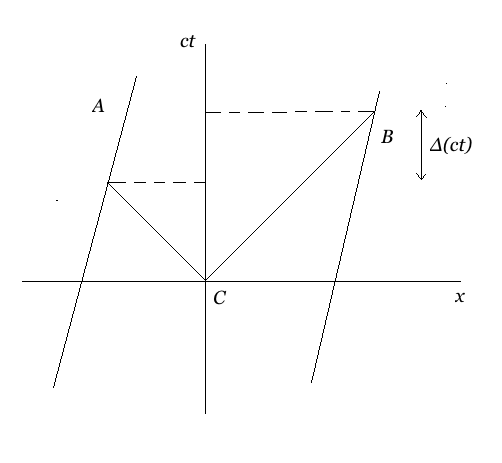 And it's apparent from the diagram that there's some time separation between the events of $A$ and $B$ receiving the signal. But I'm not sure how this definitively proves that the events aren't simultaneous for the platform observer. I could've come up with this diagram, for example: 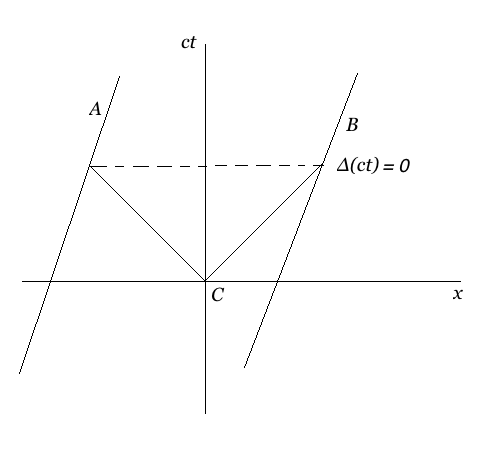 and I could've claimed that lengths in the train are affected in such a way from the POV of a platform observer that time separation is still preserved between frames (obviously I know this is wrong, but I could hypothetically make this ridiculous assumption nonetheless).

I could've said that the infinitesimal lengths contract more and more (kind of like a gradient of stretchability) as we move further in the direction of the train reference frame's motion (all this from the POV of the platform reference frame).

So my question is: what allows us to definitively say that the top picture is correct and the bottom picture is wrong? Of course, experimental evidence is one thing, but I'm guessing it's possible to prove it theoretically as well?

what allows us to definitively say that the top picture is correct and the bottom picture is wrong?

Recall that the Lorentz transform is specifically a transformation between two inertial frames. The term “inertial” refers to Newton’s first law which describes inertia, or the tendency for a body to move in a straight line at constant speed unless forced to do otherwise.

The transform you described would transform a straight line to a bent one as the line goes through that gradient of stretchability you mentioned. Such a transformation can not represent a transformation between inertial frames because an inertial object would be accelerating in that frame.

For the platform frame, any position in the train is: