Why is an event horizon dependent on density?

It’s frequently stated in Astronomy documentaries that you could replace the sun with a black hole of equivalent mass and the orbital mechanics will continue as normal. This works fine in dispelling the idea that you’ll be “sucked” into a black hole, but I don’t understand the formation of an event horizon from this.

This suggests that Newtonian mechanics (I think) hold from the perspective of the Earth’s orbit. If I were to “fall” towards this singularity from Earth, nothing would change as I pass the orbit of Mercury, so it still holds to that point. However, something drastically changes after that point (somewhere) – in one scenario I just fall into the sun and, in another, I somehow hit an event horizon and all sorts of weird things happen. In both cases, it seems that the mass acts in the same spot (a center of gravity) but the dynamics are radically different on that journey... yet the mass is the same, as is the center of mass.

My best guess is that, as I cross the surface of the sun, I start accumulating solar mass on the opposite side of me from the center of gravity that’s attracting me, and that prevents the formation of an event horizon. Is this reasoning correct? If so, is there a formalised explanation for this? I don’t seem to be able to research this properly as a layman to physics.

You’re essentially correct in the sense that when you fall into the Sun its gravitational pull on you decreases. The parts of the Sun that are at a greater radius from the center than you are no longer exert any net force on you. This is called the Shell Theorem.

A black hole, on the other hand, doesn’t have its mass distributed in a ball like the Sun does, so its gravity gets infinitely strong as you get closer and closer. The event horizon is the radius at which the gravity is so strong that light can’t escape.

My best guess is that, as I cross the surface of the sun, I start accumulating solar mass on the opposite side of me from the center of gravity that’s attracting me, and that prevents the formation of an event horizon. Is this reasoning correct?

Yes, that reasoning is correct.

describes the gravitational field outside a spherical mass, on the assumption that the electric charge of the mass, angular momentumof the mass, and universal cosmological constant are all zero. The solution is a useful approximation for describing slowly rotating astronomical objects such as many stars and planets, including Earth and the Sun.

As balkael mentioned, the Sun's Schwarzschild radius, $r_S$, is approximately 3 km. That means that if the Sun's mass could be compressed down to a sphere of $6\pi$ km circumference it would be a black hole. But that doesn't mean that anything special occurs at 3 km from the centre of the uncompressed Sun.

Newtonian gravity is a very good approximation at distances from the centre of mass that are large compared to $r_S$. At Earth's orbital radius, the difference between Newtonian gravity & GR is minute. Even at Mercury's orbit the difference is rather small. One of the early triumphs of GR is that it correctly predicts the anomalous apsidal precession of Mercury's orbit. According to Newton, the major axis of Mercury's elliptical orbit (aka the line of apsides) would point in a constant direction, if the solar system consisted only of the Sun and Mercury, but due to the gravity of the other planets (and because the Sun isn't a perfect sphere) the line of apsides slowly rotates, as shown:

Mercury deviates from the precession predicted from these Newtonian effects. This anomalous rate of precession of the perihelion of Mercury's orbit was first recognized in 1859 as a problem in celestial mechanics, by Urbain Le Verrier.

I mentioned earlier that nothing special happens at $r_S$ in the Sun. That's because when you go inside a spherically symmetric body the mass above your head exerts zero gravitational force on you. In Newtonian gravity, this is due to the Shell theorem, as G. Smith said. It's also true in General Relativity, due to Birkhoff's theorem. So all of the Sun's matter that's more distant than $r_S$ from the centre cannot create an event horizon.

If you could somehow compress that matter sufficiently then a black hole would form, but no known process can do that. As far as we know, the smallest black holes that can be created in a type II supernova explosion have a mass around 3-5 $M_\odot$ (solar masses), with the progenitor star having a mass around 20 $M_\odot$.

So density is only of indirect importance, the main thing is to get enough mass within the Schwarzschild radius. Actually, it doesn't have to just be mass, all forms of energy contribute to the stress-energy-momentum tensor which is the source of spacetime curvature.

From Earth perspective and gravitationally speaking, the main difference between the Sun and a black hole of the same mass would be its size. A black hole is basically an enormous amount of mass concentrated in a small volume.
The horizon you speak of is located at what is called the Schwarzschild radius $R_s$ and any mass condensed in a sphere of radius lower that $R_s$ becomes a black hole. For a black hole with the mass of the Sun, $R_s\approx 3km$, while the radius of the sun is $r_{sun}\approx696 000km$.
You see there the difference between stars and black holes. The mass can be the same but the volume of a black hole is extremely small compared to the radius of a star of the same mass.
Now when finding the link between the horizon and the density, it comes from the definition of Schwarzschild radius:
$$ R_s=\frac{2Gm}{c^2} $$ with $G$ the Universal gravitational constant, $c$ the velocity of light and $m$... the mass of the black hole! The horizon is at a radius $R_s$ of the center of the black hole, directly linked to the mass of this black hole.

Speaking of the effect while falling into the sun or into a black hole, in the first case, if you survive until then, when reaching the Sun's radius, it would be similar to falling into a pool of very hot and dense plasma.
In the second case, you would fall until you reach $R_s$ and you would not see nor feel that you specifically reached and passed the horizon. Various other effects will appear on the way though, you can look for example at the spaghettification effect caused by the enormous forces applying on the falling observer. Once you get to the other side of $R_s$ unfortunately our Physics cannot help you as this part is still unknown.


Why does a black hole have an horizon and a star is just a massive object? As long as you stay outside the Sun, you can consider the center of mass as the "point in space" attracting you, the same goes for a black hole. Now when crossing the surface of the Sun, some of its mass will get behind you and the approximation stating that you are attracted by it center of mass no longer holds.
Now it is important to note that mass curves space-time and when mass is highly condensed in a small volume, you will be able to get closer to the mass center.
Avoiding the maths behind this, imagine being dragged down a well by gravity, its a special well as the deeper you get and the steeper the walls get. If the well is full of water it is likely you will be hold back by the water and as possibly will escape. This case is the star case: the well symbolises the attraction, the water will retain you as would the mass behind you once inside the star.
In the second case no water, you are dragged down until the wall are perfectly vertical and there is no chance to get out. The point at which the walls reach this limit is what we call the event horizon. It corresponds to the limit in space where as 100% of the initial force is still dragging you down and you can no longer escape. It this the case where the $light\ cone$, the future possible for a particle or an observer, always points inward and can never lead you outside the blackhole.
In the following image, the curved line is the wall of the well and you see the two limits. 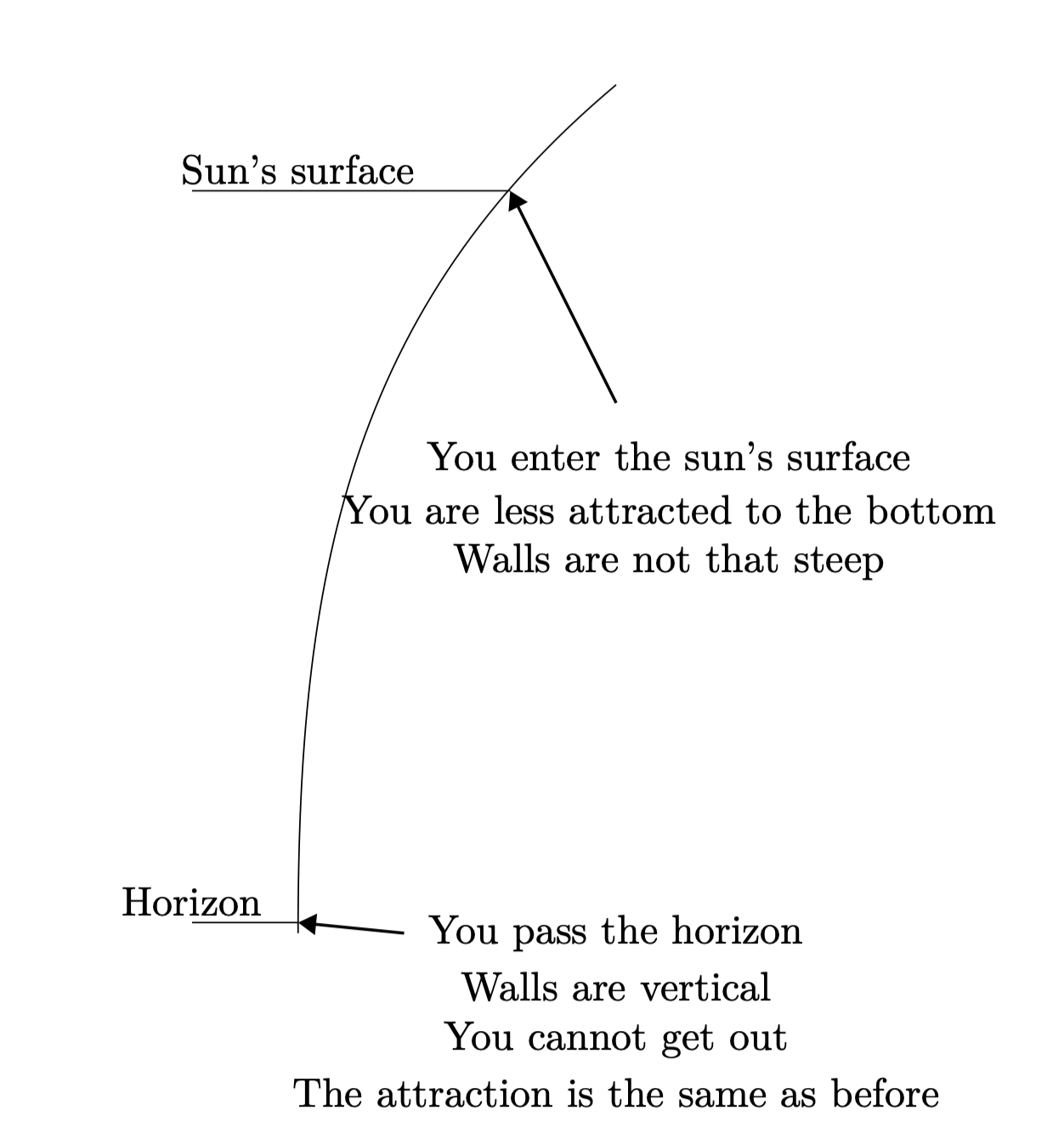 Not the answer you're looking for? Browse other questions tagged gravity black-holes event-horizon density or ask your own question.

34
Can mathematics lead to a result which is physically untenable?