How do metals reflect electromagnetic radiation?

Microwaves, for example, can be reflected off metallic surfaces. This seems counter-intuitive, since the metal's electrons could interact with the electric field component of the EM wave and absorb it.

This seems counter-intuitive, since the metal's electrons could interact with the electric field component of the EM wave and absorb it.

In quantum mechanics light is emergent from zillions of photons, and photons as quantum mechanical particles have interactions with the spill field of the lattice that composes metals and (all other solids). It so happens that in metals the optical and lower wavelengths have a high probability of being elastically scattered and thus reflected, that is why metal surfaces make good mirrors. Keeping to classical electrodynamics, this is recorded in the reflectivity of metals.

"The metal absorbs the microwaves", not in a simple but a more complicated manner Classical elecrodynamics gives a simpler explanation for how the grid functions: 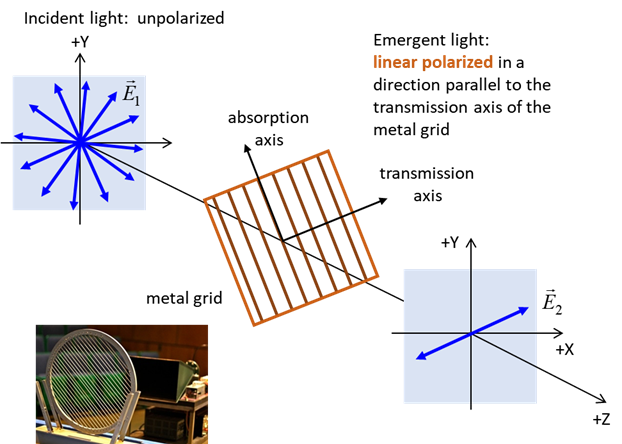 As the two ways of studying electromagnetism are consistent to each other, the classical framework is easier to understand than the quantum mechanical. It would involve interference effects of photons in a convoluted manner that the classical avoids. See this to understand about how interference effects appear with single photons at a time. In general classical electrodynamics is much simpler because it mathematically describes the behavior of photons with matter in a simpler way.

For metals, whether an electromagnetic (EM) wave is reflected or absorbed is determined primarily by (1) the frequency (or wavelength) of the incident wave, and (2) the density of electrons in the material. This is a consequence of both (a) the response of free electrons to the electric field of EM radiation, and (b) Coulombic forces between these electrons and ionic cores in the metal.

Freely conducting electrons in metals can be collectively be treated as an electron gas whose behavior can actually be described mostly using classical mechanics. In this treatment (see the Lorentz-Oscillator model, a specific example of a driven damped harmonic oscillator), an electron can be accelerated due to a driving force—in this case, the electric field that comprises EM radiation. Other forces affect the electron's motion as well, namely: (1) the Coulombic attraction between electrons and ionic cores within the metal, which provide a restoring force; and (2) damping forces, such as the scattering of electrons off of ion cores.

For most metals, the plasma frequency is somewhere in the ultraviolet range, which is far higher in frequency (and thus in energy) than microwaves. This is why microwaves are reflected by sheet metals (the case of mesh grids is different, as they rely on mechanisms that a Faraday cage operates on).

Addendum: there actually is also a quantum-mechanical mechanism for absorption of EM radiation, which is interband absorption—this results from the electronic band structure in all ordered (non-amorphous) materials. Interband absorption explains why some metals are visibly different in appearance (e.g., copper and gold) when these interband transitions occur in the visible region of the EM spectrum. Still, optical properties in most metals are dominated by the position of the plasma frequency rather than interband transitions—hency why most metals have a similar shiny gray/silver reflective appearance.

You are right that there are ample electronic transitions in a metal that match the frequency of optical and lower frequencies. However these transitions do not satisfy momentum conservation. When you apply a grid then momentum is only conserved up to an inverse lattice vector (of the grating). For a suitably choice of grid pitch and duty cycle it is then possible to meet the requirement for a chosen wavelength. Under these conditions light is absorbed.

3
Light-matter interaction and an object's appearance
2
Why are some materials dull rather than shiny (cloth, coal, matte paint etc.)?
2
How big of an area can a classical charge absorb an EM wave from?
0
Emission of heat from absorption of light photon
0
Is reflection just a re-emitted wavelength at the electronic scale? Does reflection require absorption in the first place?
1
Cavity Radiation, why should only standing waves persist in the cavity?
0
Why wire grid polarizers do not re emit absorbed radiation both ways?