I'm looking for a simple explanation of how a whistle operates. I know that forcing air over a sharp lip can set up a wave in a resonating cavity, but how? "Most whistles operate due to a feedback mechanism between flow instability and acoustics"--yes, but what does that feedback mechanism look like?

I was surprised to be unable to find a basic diagram online demonstrating how a whistle operates. I did find lots of images like this: 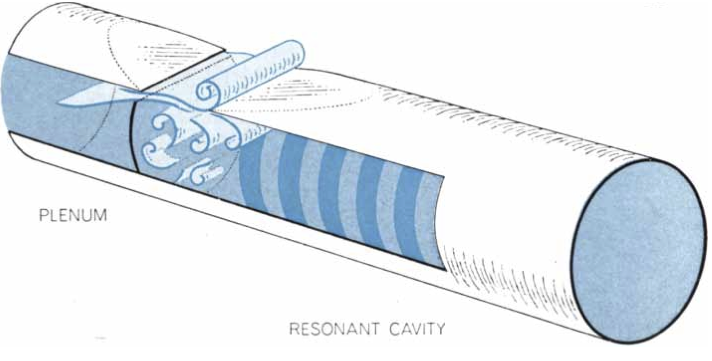 . . . but such images are unhelpful since they don't show exactly what's producing the oscillation!

Let's consider the specific type whistle shown in the question.

When we blow the whistle, air is forced to rush out through the narrow opening. The flow of air at the center of the stream is significantly faster than the neighboring air close to the main stream. If the air stream is easily deflected(unstable), vortexes are generated. If the same thing happens repeatedly, many more vortexes with similar properties will be generated. These vortexes cause air pressure to vary in a periodic way, so sound wave is produced. The frequency of this sound wave is related to the rate at which the vortexes are shed. Since the process is rather chaotic, many different rates or frequencies are produced at a time.

As you can see in the picture, the stream is divided into two parts. One part coming out of the opening and the other part stays inside. Sound wave trapped inside will interfere with each others. If the frequency of sound doesn't match any of the resonant frequencies of the chamber, the waves will interfere destructively and vanish quickly. However if the frequency matches the resonant frequency of the cavity, the wave's amplitude will increase overtime. The rate of increasing will decreases as the amplitude builds up. Eventually it will reach a steady state. At this point the amplitude of sound wave is strong enough that the sound becomes very audible. The sound wave come out of the hole, get dispersed strongly, and finally reaches our ears.

Some whistles have a small ball bounces around inside the cavity. The ball changes the shape of the cavity and at the same time the resonant frequencies. Thus it allows us to hear wider range of sound frequency.

These things usually work by feedback that causes pressure changes, that then causes the original flow to be re-directed, which then has the opposite effect on pressure, etc.

This is simpler to think about when considering a common ball whistle, like athletic coaches and refs usually have. The part you blow in has a thin slot, which makes a laminar sheet of air blow accross a opening, but which then continues on into the round part. However, there is no other opening in the round part, so eventually the pressure builds up and this pressure "breaks through" the laminar sheet that sort of "covered up" the opening. This allows the pressure to release through the opening, which also re-directs the air from the nozzle to not go into the round part. The pressure in the whistle then drops, the laminar sheet can re-form or resume its original un-redirected flow, which cause the pressure to build up again, etc.

The ball inside the whistle isn't necessary for making sound. It periodically breaks up the process above, effectively modulating the whistle frequency at a much lower frequency. I'm not sure why exactly this is done, but I think the sound with the ball is more interesting or attention getting or easier for humans to localize.

There has been endless confusion about how this type of whistle really works. If you investigate the flow pattern, you see the sort of vortex patterns in your picture, but that doesn't necessarily mean the vortices cause the sound. In fact the reverse is true - the sound causes the vortices!

The basic explanation (which also applies to organ pipes, and musical instruments like the tin whistle, and recorder) depends on Bernouilli's principle. It's simpler to think about making a sound by blowing over the open end of a bottle, because the "pipe" part of the whistle is really the same as the bottle bent round through 90 degrees. The important thing is not that you blow "into the pipe", but that you blow "across the hole at the end of the pipe".

When you blow across a bottle, the pressure in the moving air stream is decreased, and some air is "sucked out" of the bottle into the low pressure air stream.

However, the extra air merging into the airstream bends the airstream away from the mouth of the bottle, which reduces the amount of "suction."

The critical parameter here is the time it takes the blown air stream to travel across the mouth of the bottle, compared with the time for one vibration cycle of the air inside the bottle. If the two time intervals have the correct relationship, the oscillations can build up in amplitude. This explains why if you blow gently (low velocity), you produce no sound at all, and if you gradually blow harder, suddenly the sound starts. Depending on the geometry of the whole system, if you blow very hard the sound may "jump" to a different higher frequency. In fact it is possible to adjust an organ pipe so that it will successively produce a sound at with 3 or 4 different pitches, depending of the wind pressure (and therefore the air velocity) used to blow it.

The vortices are simply by-products of the oscillating air stream hitting the edge of the bottle mouth.

The "wrong" explanations start from the correct observation that simply blowing a jet of air through a nozzle can produce a pattern of vortices, which may repeat at a definite frequency. But for the geometry and blowing pressure of a typical whistle, the frequency of that vortex pattern (if it exists at all) is very different from the frequency of the sound produced by the whistle, and it's hard to invent a good reason why the vortices should cause the sound.

Not the answer you're looking for? Browse other questions tagged fluid-dynamics acoustics or ask your own question.

39
Why do you have to blow sideways on a flute?
10
Why is a whistle sound emitted when air is pushed through a tight space?
1
Tone production in Irish Flutes?
1
Why the faster you spin the highest the pitch get in a whirly tube?

12
Why does my natural whistle have a maximum volume
10
Why is a whistle sound emitted when air is pushed through a tight space?
1
Bending notes on a tin whistle
5
Is a flame whistle, pipe organ or flute possible?
2
Why do we hear a “whistle” from a flying arrow?
47
Why does pitch increase when you blow harder into a whistle?
1
How does sound get generated when you whistle?