Time dilation in a moving frame of reference

According to the theory of relativity, time slows down in a moving frame of reference. But I am confused in the example given below.

Suppose there are two men $A$ and $B$. $A$ is standing in moving train ( say with speed 60% the speed of light) with a ball in his hand and $B$ is on the station. When $A$ drops the ball downward, it comes back to him in suppose 2 seconds. Now from $B$'s frame of reference, the ball would travel along the line as shown in the figure.

The ball will fall down as well as move forward. Since the height of the ball from the floor is not changed, the time it would take to hit the ground will be 1 second and at the same time it will move forward to point $P$ (as shown in fig), and in the return journey, it will again take 1 second and hence the total time of motion is 2 seconds which is the same as observed by $A$.

But we know that in a moving frame time slows down but in the above example, both the time is the same. 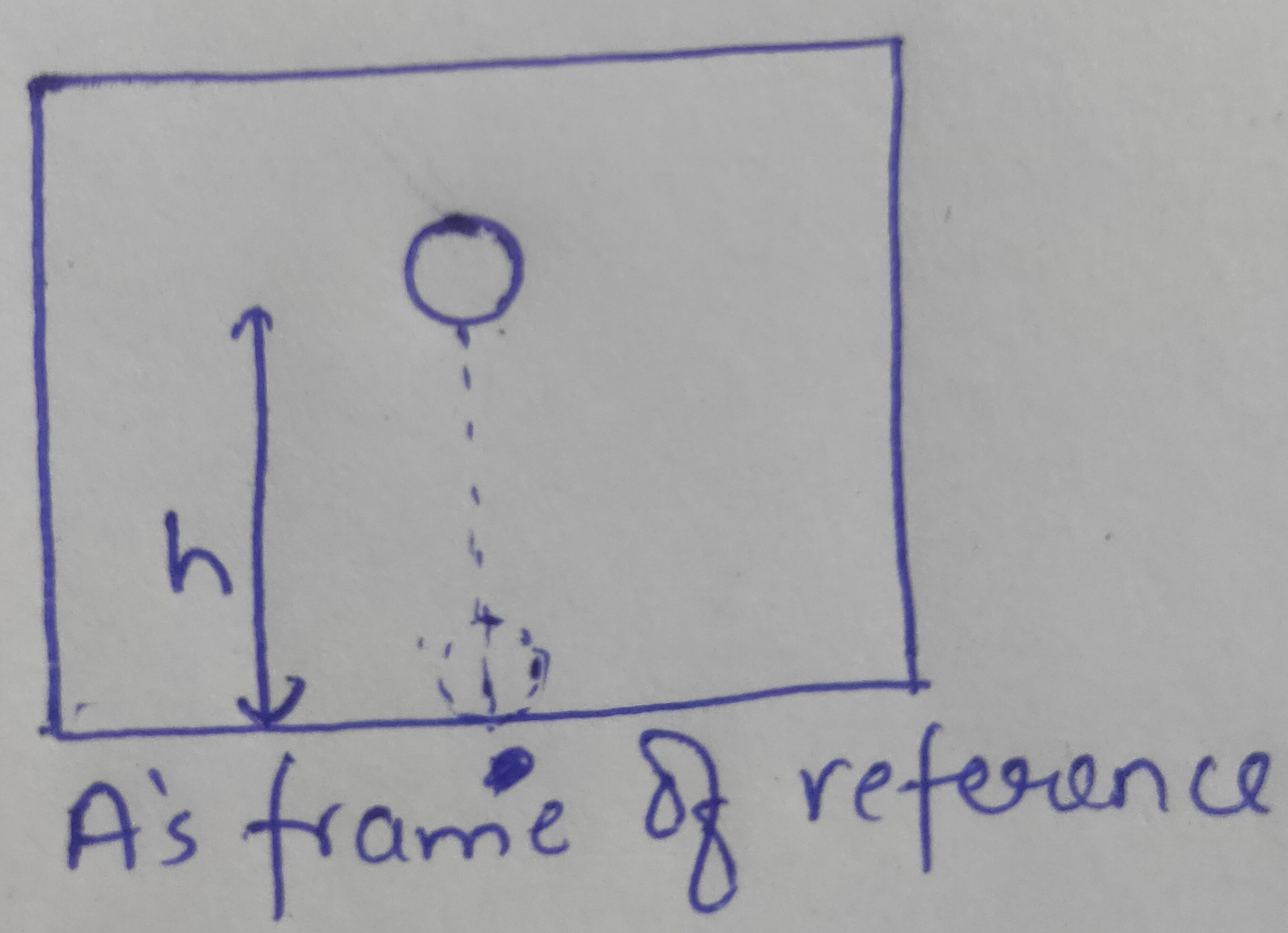 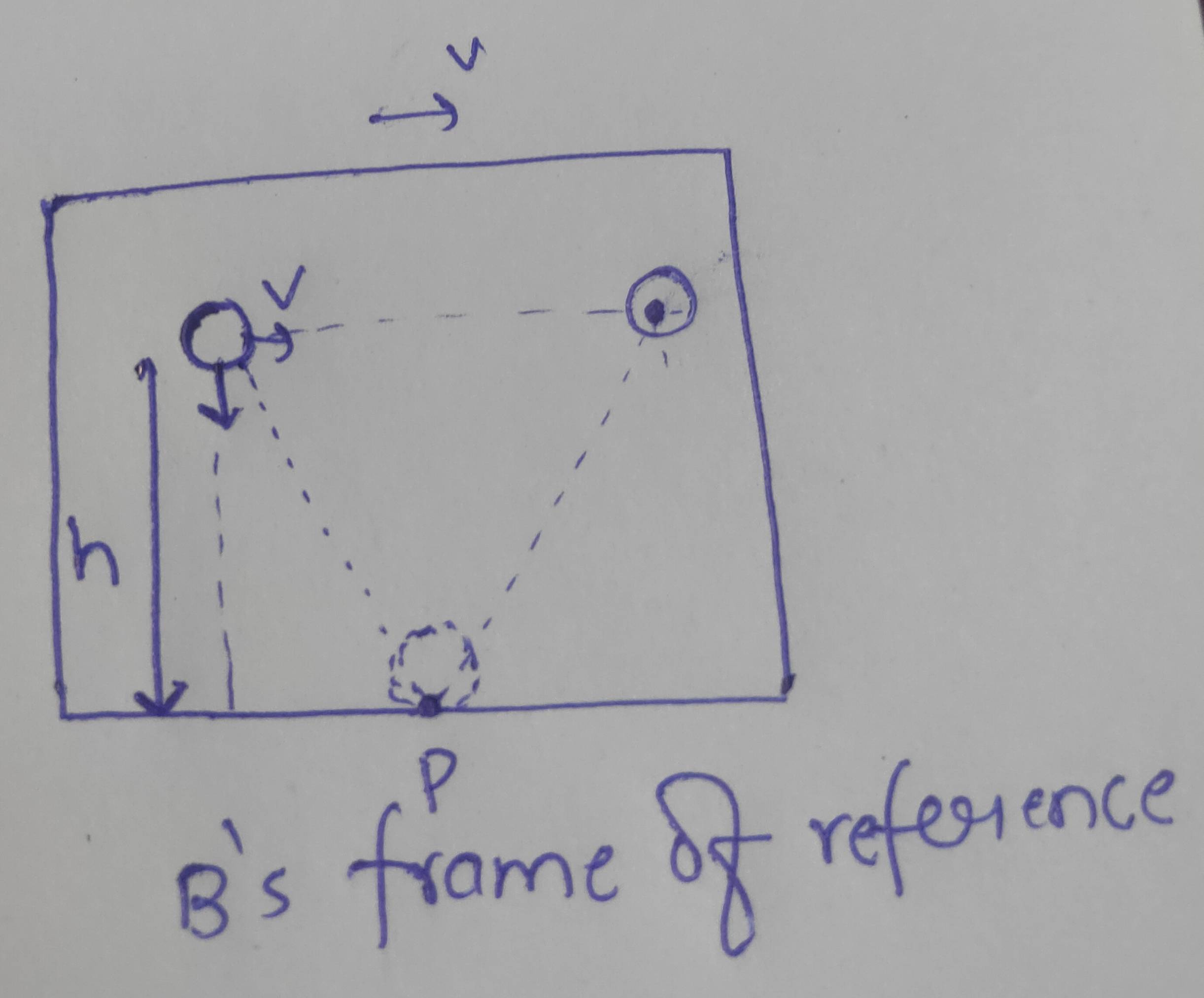 . How can we prove time dilation in this question? Please clarify my doubt. Use Lorentz transform after clarifying its importance in this question. Answer according to the question only ( don't use your own data)

Once you remove this assumption, there is no paradox. The Lorentz transformations of acceleration tell us that acceleration in the direction perpendicular to the relative motion between two frames transform as $$a'=\frac{a}{\gamma^2}$$ where I chose the unprimed frame to be the frame of the train and the primed frame to be the ground frame. Since there is no length contraction in the direction perpendicular to the direction of relative motion, both the ground frame and the train frame will agree that the ball travels a vertical distance of, say, $h$. Since the motion will be constant acceleration motion in both frames (albeit with different accelerations), we can write $$\Delta t=\sqrt{\frac{2h}{a}}$$ $$\Delta t'=\sqrt{\frac{2h}{a'}}=\gamma\sqrt{\frac{2h}{a}}$$

Thus, we see that $$\Delta t' =\gamma \Delta t$$which tells us that as observed by the ground, the ball will take more time to hit the ground than it will take to do so as observed by the train. So, indeed you'd notice time dilation. The paradox arose because you simply assumed you wouldn't notice such an effect!

It should be strictly noticed that this analysis is only valid for small times after the release of the ball. Once the ball picks up a vertical velocity, the relationship between the accelerations in the two frames, $a, a'$ would change. Also, the acceleration due to gravity itself wouldn't remain $g$ in the train frame itself. See, Rindler coordinates for a discussion of how to describe constant acceleration motion over extended periods of time in special relativity.

As others have pointed out, the impact of velocity on apparent time is really small on this scale. We can show the reason, however, if instead of a bouncing ball taking 1 second, we make the problem as follows:

Person A shoots a photon at light speed at a mirror on the floor 1.5 meters down. In his reference frame, the photon travels a total of 3 meters down and back.

To explain this example you have to consider Lorentz transformations (so you understand how time changes between two observers). Relativity tells you that in this example both the observer see the other clock going slowly because it's equivalent to consider the train fixed and the ground moving or vice versa. If for the observer on the train (call him $A$) the ball takes one second to hit the ground, then, for the observer on the ground (call him $B$) it takes more time (but the difference is so small that he can't notice it). Indeed the observer $B$ see that while the ball fall the clock of $A$ measure 1 second, but since for $A$ the clock of $B$ is slower it means that for him it has passed takes more than 1 second.

One last thing, if in your example you change the ball with a ray of light and you assume that the speed of light is constant you can easily derive that both observes see the clock of the other going slowly. This is because the observer on the ground see the light travels more distance than the observer on the train but they both see the same speed of light. And you can repeat the reasoning considering the train fixed and the ground moving to see that everything is symmetric.

The paradox lies in the fact that you are assuming that acceleration is equal in both systems, which is not.

No matter what kind of event triggers the chronometer of the person inside the train.

$x = 0$ means: there are several clocks along the rail line, all synchronized by the station frame. The clock to be checked is that one in front of the passenger at each event.

The time interval between the events, measured at this clocks by the passenger, is greater than 2s.