What corresponds to the radial component of the axion potential?

An axion can be understood as an oscillation of the axion field in some potential.

In the Peccei-Quinn mechanism we only have 2 degrees of freedom. When the universe has a temperature above the $T_{QCD}$, before the vacuum realignment mechanism (VEM) kicks in, we have a symmetrical mexican hat potential. The axions are Nambu-Goldstone bosons "oscillating" along the azimuthal angle inside the brim, and eventually become Pseudo-Nambu-Goldstone bosons after the VEM is turned on.

My question is what particle corresponds to radial motion in this potential? 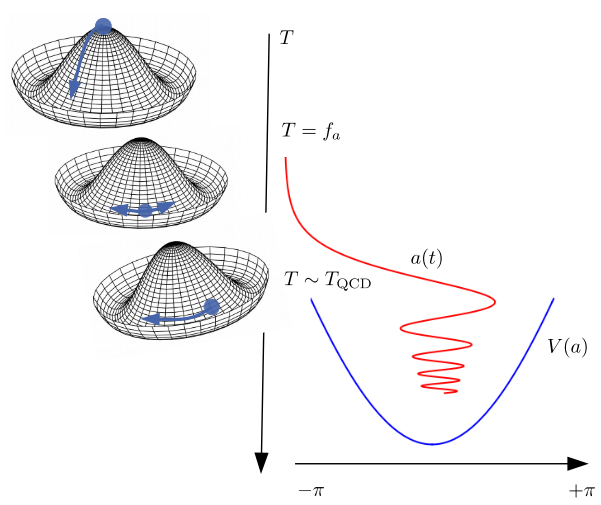 Taken from this paper

quantum-field-theory higgs quantum-chromodynamics axion
share | cite | improve this question | |
edited May 6 at 19:04
alessandro
asked May 5 at 5:07

This particle doesn't have a standard name -- if pressed, most people would probably just say "the radial part of the Peccei-Quinn field".

The reason for this is twofold. First, you generically expect it to be quite heavy, on the order of the Peccei-Quinn scale, and hence far above what can be probed in experiments. Second, its particular properties depend very sensitively on how you set up the model. For example, if you had two coupled PQ-charged complex scalars and broke $U(1)_{\text{PQ}}$, you'd still get one light axion, but now you'd have three extra heavy particles rather than one. So the really interesting part of the model is that which is simultaneously generic and observable, in other words, the axion itself.

Not the answer you're looking for? Browse other questions tagged quantum-field-theory higgs quantum-chromodynamics axion or ask your own question.

8
Potential of the pseudo Nambu-Goldstone boson
2
Terminology of Higgs boson and Goldstone boson
2
What happens to Goldstone bosons in the Higgs potential after symmetry breaking?
7
Why is is the vacuum expectation value (VEV) of the axion field such that it cancels the theta angle of QCD?
6
Peccei-Quinn-symmetry and effective Lagrangian for the Axion field
6
What is dynamical symmetry breaking, exactly?
3
How do know that Goldstone Boson actually become the longitude degrees of freedom in W+,W- and Z boson?
2
What happens to the massive gauge bosons in a simple Little Higgs model?