Question About Speed of a Stone Underwater [closed]

Why does the speed of a stone dropped into a lake increase as it moves to the bottom of the lake?

There are (as usual) opposing forces acting on a falling stone. The two that are relevant here are gravity, which will pull the stone toward the bottom of the lake, and drag which will oppose whatever motion occurs. The higher the objects velocity, and the more viscous the surrounding fluid, the stronger the force of drag will be.

What might be confusing you is the fact that when a stone is falling through air, because air is not very dense, it does not apply much drag. So the force of gravity overwhelms the force of drag, so it accelerates downward very fast, until the type of fluid surrounding it suddenly switches as it collides with the surface of the water. Once it is in water, it suddenly has a lot of drag because it has a high velocity and a high viscosity fluid surrounding it. So the drag force is stronger, slowing it down. Once it slows down a bit, gravity becomes the stronger force and then it continues on its merry way to the bottom of the pool.

When stone enters the water net weight (weight in air-buoyant force ) of stone tries to accelerate it. As the downward velocity increases an opposing viscous drag force also starts increasing which directly proportional to the square of velocity. Thus the stone will keep on accelerating till the opposing drag force will be sufficient enough to balance the net gravity force acting downward. Therefore stone will achieve a maximum constant velocity called critical velocity where these two opposing forces equate & stone will move with that velocity to the bottom.

The thing to be noted is that upward buoyant force doesn't depend on the velocity of stone. 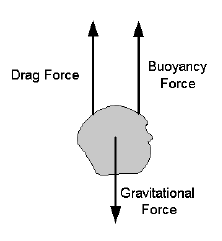 These are the basics, A force is either a push or a pull, force causes acceleration, acceleration causes a increases velocity(which is basically speed with direction)

Now, Let's imagine you simply release a stone on the surface of water. i.e it starts its journey with zero velocity. Gravity applies force on it, which causes acceleration of stone downwards and the stone goes downwards with increasing velocity(If you think carefully this happens in air too).

But, the stone goes down slowly as compared to air. This is because of the buoyant force which acts in a direction opposite to the force exerted by gravity. The buoyant force is increases with an increase in the volume of the solid on which it acts(Which is why it is difficult to push a beach into water than a football) . And the buoyant increases with an increase in density of the fluid(Which is why you can easily float on dead sea which is a lot more dense than the water in your swimming pool).

Now if Buoyant force greater than force exerted by gravity the body rises up else the body sinks.

In air the buoyant force is negligible due to the low density of air(compared to water). So, the net force in air is much greater than in water hence more acceleration in air and more velocity.

But we missed another thing, which is the drag force

The drag force too acts in the direction opposite to gravity and further decreases the net downward force. One interesting fact is that the drag force depends upon the velocity of the body(greater the velocity greater the drag force). As a body moves down due to acceleration its velocity continuously increases and thus the drag force increases. A point comes when the sum of drag force and buoyant becomes equal to the gravitational force that is, $$F_{grav} - (F_{buoyant} + F_{drag}) = F_{net} = 0$$ As you can see the resultant force becomes zero, Acceleration becomes zero then and velocity stops increasing and remains constant(leading to the drag force remaining constant too). And hence the body moves down with a constant velocity called the Terminal Velocity. At this point the body keeps moving downwards at constant speed until it hits bottom.

If you observe since air is also a fluid this happens in air too but the effects are less noticeable than in water.

Not the answer you're looking for? Browse other questions tagged fluid-dynamics everyday-life viscosity or ask your own question.

1
Pressure in Bernoulli's equation
19
Why does the lake surface appear darker in some areas?
1
Is it possible to determine the depth according to waves at the surface of a fluid?
0
Stone bouncing off water surface
0
About stoke 's formula
16
Does a slowed down version of small stone falling in water look the same as a big rock falling in real time?
1
Can we tell anything about the velocity at which a spherical stone falls into a lake based on the sound it makes?