How $v=r\omega $ holds in a circular motion?

when we talk about circular motion we have an equation of $v=r\omega$ where $v$ is linear velocity $r$ is the radius of circular motion and $\omega$ is its angular velocity but if circular motion has a constant angular velocity it means that both $\omega$ and $r$ are constant so acc to this equation $v=r\omega$ linear velocity should also be constant. The same goes for acceleration $a=r\alpha$ if $\omega$ is constant $\alpha$ is zero and so much a but as velocity is changing a can not be zero. How can we explain this paradox? I have just started my high school so I am aware of only simple calculus so I will appreciate if you take this in your consideration while answering :) thank you

newtonian-mechanics rotational-dynamics
Share
Improve this question
edited May 3 '20 at 17:33

In $v=\omega r$, $v$ is speed, not velocity. The speed stays constant in uniform circular motion.

The vector relationship involving velocity for uniform circular motion is $\vec{v}=\vec{\omega}\times\vec{r}$. Both $\vec r$ and $\vec v$ change with time, but their magnitudes $r$ and $v$ don’t.

In the equation $v=r \omega$, as used at high school level, all three quantities are scalars. In particular, $v$ is not velocity but the magnitude of the velocity, that is $speed$.

The equation $a=r \alpha$ that you quote is again a relationship between scalars. $a$ in this equation is the magnitude of the tangential component of a body's acceleration. So it is zero for a body moving in a circle at constant speed. Only if the body's speed is changing is $a$ non-zero.

Not only in a circular motion, but also in any motion, you can think the acceleration as composed by two terms:

In particular in a uniform circular motion $\omega$ and $r$ -as you have said- are constant and $\alpha = 0$, so the one term that is zero is the tangential acceleration.

It's a sloppy notation, the $(t)$s are usually dropped from $v(t)=r\omega(t)$, hence $v=r\omega$ can either be constant or variable. One needs to pay attention to the problem statement he has in front of him!

In any case, you are right; if $\omega$ is constant, i.e $v$ is also constant, then $\alpha$ is zero, and the same goes for $a$ since they are related by the equation you have written.

Notice your slight mistake. You have considered 'both $\omega$ and R as constants. But, if you think about it, the $\vec r$ is also rotating. So, the velocity is not constant, as you had interpreted. Now, coming to the acceleration, (using the same arguement) it too is not zero. 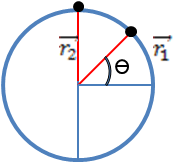 Think of it like this. The particle is moving momentarily in a straight line. But it is accelerated towards the centre, so it falls towards the centre, but perpetually keeps doing this without getting any closer. For instance, if you throw a ball standing on a seashore, perfectly horizontally such that it falls beyond the horizon, due to the round shape, it'll go into perpetual motion.