What is a phase of a wave and a phase difference?

What is the meaning of the phase of a wave and phase difference? How do you visualize it?

This function of $\theta$ carried on further on the x-axis repeats itself every $2\pi$. From the graphic, one can see that it looks like a wave, and in truth sines (and cosines) come as solutions of a number of wave equations, where the variable is a function of space and time.

In the following equation

If one happens to have two waves overlapping, then the $\phi_1 - \phi_2$ of the functions is the phase difference of the two waves. How much they differ at the beginning ($x=0$ and $t=0$), and this phase difference is evidently kept all the way through.

Let us consider a travelling wave along a very long piece of string. The string will oscillate, and the displacement, $y$, of the string from the flat position (no wave at all) is given by the following equation assuming that the wave does not have a head start

$A_0$ = the maximum departure of the string from the flat position (called: amplitude)

$T$ = the time taken by a particle in the string to complete one oscillation, return to its initial position and repeat the oscillation over and over again.

$\lambda$ = the wavelength of the wave along the string. Imagine this as the distance travelled by the wave in one period, T. Hence one can write the equation $v=\lambda f$, where $f$ is the frequency of the oscillation of a particle in the string. You can thing of this as the number of complete cycles the wave is doing in one second.

The phase of the wave is the quantity inside the brackets of the sin-function, and it is an angle measured either in degrees or radians.

The phase of a wave is not a fixed quantity. Its value depends on what point along the x-axis and at what time you observe the wave. For example, if you consider two points $x_1$ and $x_2$ along the $x$-axis at some common instant in time $t_c$, these two points will have their own phase $\phi_1$ and $\phi_2$ given as

The phase difference the wave has at these two points is

The important result here is that the two waves can be:

I think the relevant question here is "What is a wave?". We generally define anything that solves the wave equation or generalisations thereof to be a wave; I realise however that may not be quite illuminating.

Note that this generalises to other waveforms; for instance you can try $f(\varphi) = e^{-\varphi^2}$ where $\varphi$ is as above and I got tired of writing the $(x,t)$ dependence explicitly :-), and see what you get.

*Of course these are not the only solutions, but any of them can be obtained as a superposition of sinusoids like this. Phase is mostly useful when you are talking about sinusoids or things that resemble them closely enough however.

What is the meaning of phase difference?

It's an offset, in time or space, of one wave with respect to another 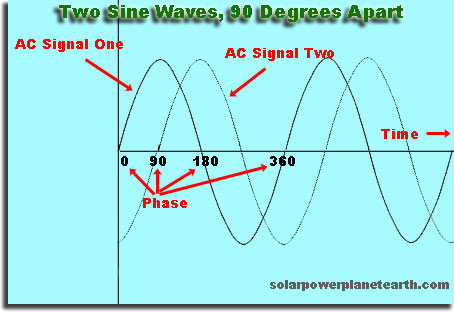 You may know that the highest point of a wave is known as the "crest" and the lowest one is known as "trough".

Now, take the graph of a sine and cosine functions. You will see the difference that at the origin: i.e. sine is at zero and cosine is at $1$. So, there is a "phase difference" of $\frac{\pi}{2}$ angle.

For better understanding, you may refer to "Understanding Physics Mechanics Part 2 " by DC Pandey.

Another way to gain insight is to defer the motion of waves and focus on the complex plane and the notion of phasor obtained via Euler's formula, $e^{i \theta} = cos(\theta)+ i sin(\theta) $ (refer to the figure in Wikip).

To relate back to waves, replace the constant $e^{i \theta}$ with a function of time $e^{i \omega t} $ where $\omega$ is the angular velocity.

Finally note that two such phasors $e^{i \omega_1 t}$ and $e^{i \omega_2 t}$ do not have a (constant) phase difference if their angular velocities differ, ie if, $\omega_1 \neq \omega_2$, (though rational ratios of angular velocities result in stable winding numbers or entrainment, which is a more general form of phase relation).

Basically phase is an angle of line joining the origin and the any point on the wave with $x$ axis of our reference frame and the word phase is defined for the single wave function. But the phase difference is defined for two waves. And it tells us information about the resultant shape of waves either it is constructive or destructive or any complex ie irregular. Which can b later Fourier transformed to sines and cosines waves.

Wave is a periodic motion. There are many different periodic motions. For instance, take a look at an analog clock. Its second hand makes a full circle every 60 seconds. If you take two clocks, then they will usually have a phase difference: their second hands will be circling every 60 seconds, but at any given time they will be pointing to different number of seconds.

On the other hand if you look at the second hand and a minute hand, then there's no point in talking about the phase difference, because they make a full circle at different frequencies: 60 seconds and 60 minutes.

So, in order to talk about phase difference, we should have two waves at the same frequency. When these waves are not perfectly synchronized, we have a phase difference.

In addition to the other answers: the phase is a Lorentz scalar. A plane wave is:

where $\phi$ is the phase as a function of position and time:

This can be written as:

which is manifestly covariant. The phase is:

All inertial observers see the same phase at a given point in space-time, even though they do not agree on frequency or wavelength.

0
What is the definition of phase lag and phase difference?
1
Does "phase" in physics always have to expressed in radians or degrees?
-1
A wave of wavelength $\lambda$ corresponds to $2\pi$ radians. Is this true for all waves?