My textbook, and Wikipedia:

How do we extend this definition to able to define $\vec{\omega}$ about an axis?

Take for instance another quantity: Torque, which is also only defined for a point. However, we can define torque about an axis: Take any point on the axis, and calculate the torque relative to that point. The component along the axis is the same for all the points on the axis: and that is what we call the torque "about that axis". Now, I believe this treatment fails for $\vec{\omega}$ as I depict in the example: 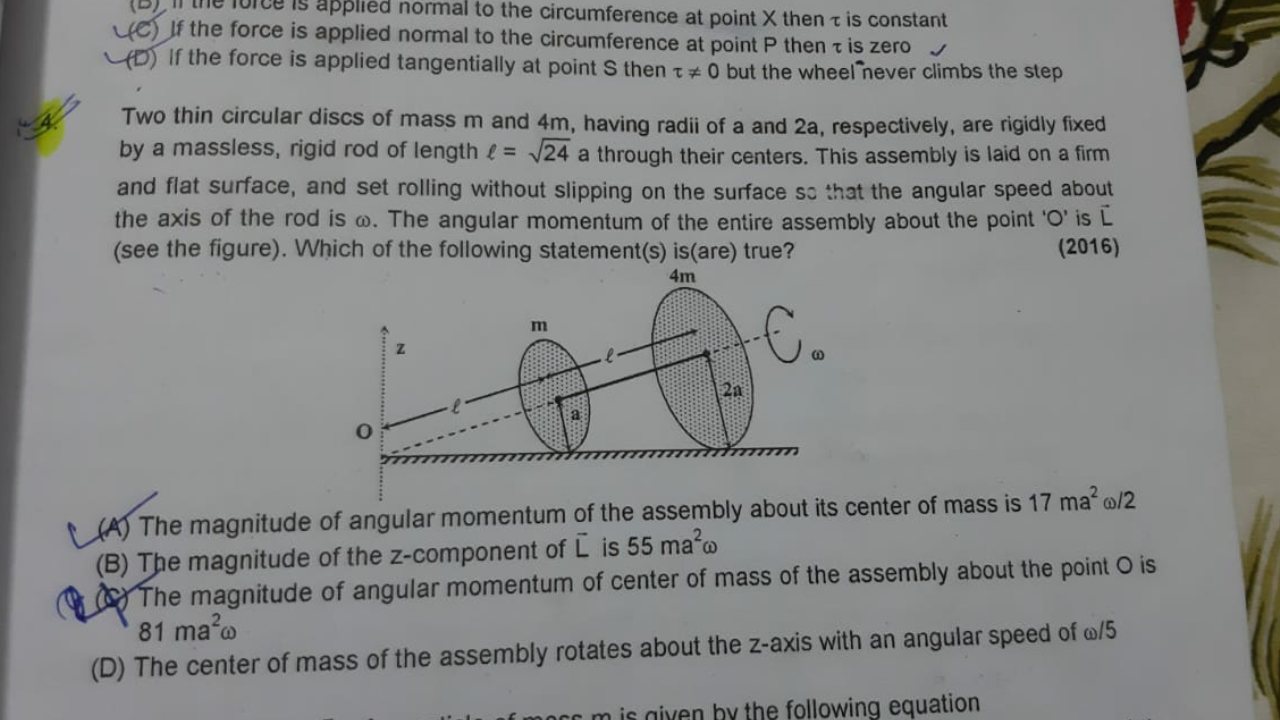 (This is a very popular question, Part of the JEE advanced exam, 2016). I only care about option D here(which is given to be one of the correct answers). There is one main thing I want to clarify:

This method was employed by all the solutions posted online for option D: They calculated the angular velocity vector for the center of disc-1 (This will be the same as that of the center of mass) about the origin, and took the component of this vector about the $z$ axis:

If angular velocity vector of the *center of disc 1*relative to point $o$ is $\vec{\Omega}$,Then $\vec{\Omega}$ will be at an angle $\theta$ from the z-axis. Since the velocity of the center of the disc is $a\omega$, it follows that $|\vec{\Omega}| l=a\omega$, And thus $|\vec{\Omega}|\cos\theta=a\cdot(\omega/l)\cdot\cos(\theta)=\omega/5$.They claim that this is indeed, The Magnitude of angular velocity vector about the $z$-axis. I believe they have tried to use the same line of reasoning which I mentioned earlier works for torque: The component along the axis for any point is the same.

Now consider a point $P$ on the $z$-axis, having coordinates ($0,0,l\cdot\sin(\theta)$). The angular velocity vector of the center of disc-1 Relative To This point is along the $z$-axis , and has magnitude $a\cdot(\omega/l)\dot\sec(\theta)$. Which clearly means that different points have different components. Why then, all the solutions only considered the origin: What's special about the origin which got the correct answer?

I have tried my hardest to make this Not seem like a "check-my work" kind of question, And I am indeed solely after this concept: Defining angular velocity about an axis, and I took this exam question because I believe that this demonstrates exactly what points confuse me. If anyone feels that I can edit the question such that it doesn't feel like a homework like the question, please point it out, I'll be more than willing to edit.

Interesting question, though I think that the questions could have been asked in a better way.

First, let met explain the angular velocity with respect to the $z$-axis. If you look from atop, then you'd see something like this. 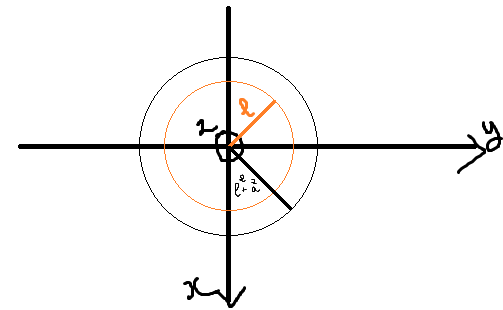 Call the angle that is described on the $xy$-plane $\varphi$, then the angular displacement is given by $\Delta s=\sqrt{l^2+a^2}\Delta\varphi$.

Now I'll explain the angular velocity about the origin. By this they meant you to imagine that the configuration is perfectly straight. 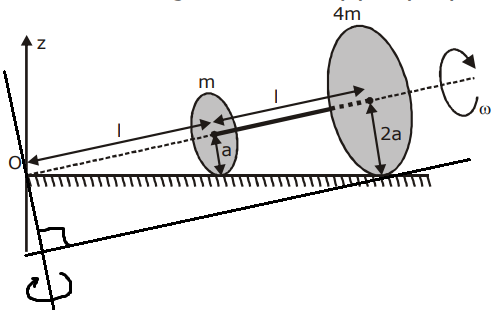 Do you see the line I have drawn? You need to imagine that it is as if the disks are rolling on that plane (we see it as a line from this point of view).

$\varphi'$ is the angle described on the imaginary plane.

The angular displacement is (the same arguments as before holds, but in this case the smaller disk doesn't touch the ground, so we operate on the bigger one)$$\Delta s=2l\Delta\varphi'=2a\Delta\phi\implies\dot\varphi'=\frac{a\omega}{l}=\frac{\omega}{\sqrt{24}}$$ To go from this back to first case, then if you wish to project$^*$ $2l$ onto the $xy$-plane you will do $\left[2l/(\cos\theta)\right]\Delta\varphi=2a\Delta\phi$, hence $\omega_z=\dot\varphi'\cos\theta$, which is why projecting the angular velocity pseudo-vector about the point $O$ in the imaginary plane onto the $z$-axis works.

Possible confusion with regards to ($^*$):

However, this is not what we have in this situation, the "projection" here is in the process of bringing the whole apparatus from the imaginary position to what we see on the problem statement's image, thus only changing the length of the radius of rotation, but keeping the whole system moving in a circle.

Thus the projection is taking the new radius of rotation of the point of contact of either of the disks with the ground, which is painting a circle!

If you have a mobile point (here we considered the point with which one of the disks, doesn't matter which one, touches the floor) naturally rotating about a point $O$ with a radius of rotation $r$, then, if it is brought to another level by rotation such that it still rotates in a circular fashion but about an axis that makes an angle $\theta$ with the original one, we can find that its angular velocity about this axis is equal to its angular velocity about the original axis scaled by $\cos\theta$.

Addendum about the question on the point P:

Let's consider the point $P$, and let's also place ourselves on the plane that contains $P$ and that is parallel to the $xy$-plane in order to find an expression of our angle.

You can see that that $z$ height corresponds with the $z$ height of the center of mass of the little disk, hence our rotation radius is $l\cosθ$ and thus $Δs=l\cosθΔφ$. We need to find a way to relate this to $Δϕ$ as I have done.

1) The reason for most commonly choosing the origin, is that it is coordinates that are constant regardless of other variables, for example your point $P$ is dependent on length $l$.

2) Removes any extra constants, for example, your point $P$ can be set as the origin, with everything else translated by the same amount.

It makes no difference which point in most cases, you just need a point that you stick to, with the origin being the simplest to choose (so why not). The rod in both cases also intersects the origin which naturally eases things.

We're saying the magnitude of the angular velocity of the rod is $\omega$, which is not a vector. You can relate each individual component of the vector $\vec{\omega}$ by its magnitude $\omega$ and each component should produce the same $\omega$ when resolved.

2
Doubt regarding calculation of angular velocity