Will a body executing pure rolling motion on a smooth frictionless inclined plane continue its pure rolling or not?
According to my knowledge the torque due to friction acts on the body which helps it to continue its motion. But now since the friction itself is removed hence it should start slipping. The gravity will keep on try to increase the velocity and there won't be any torque to increase it's angular momentum hence there will be a time when this pure rolling motion will cease.
(The body is moving down the inclined plane)

newtonian-mechanics torque rotation
Share
Improve this question
asked May 2 '20 at 13:45

Imagine an incline with constant inclination. A sphere or cylinder is rolling down it due to gravity: 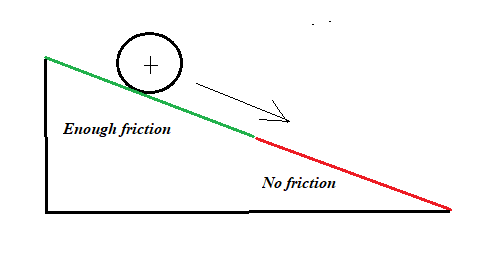 Imagine also that the top half of the incline provides enough friction so that the object rolls without slipping.

And the bottom half of the incline is completely friction-less.

where $v$ is velocity, $\omega$ angular velocity and $R$ radius.

By extension it also means:

When the object enters the friction-less part of the incline there's no more torque (caused by friction) to maintain the relationship:

because without torque $\alpha$ now no longer changes while $a$ keeps increasing. So rolling with slipping can be summarised as:

A sphere may be rotating (in any direction) as it moves across a friction-less surface, but the term rolling generally implies an instantaneous static contact between the surface and the bottom of the sphere.

Not the answer you're looking for? Browse other questions tagged newtonian-mechanics torque rotation or ask your own question.