Inflation theory and the flatness problem

The flatness problem occurs where the current universe has a density so very close to the critical density, but that is weird because that would require the universe to have omega almost = 1 from the VERY beginning (and this probability is extremely small). It is said that if omega 'much' smaller/bigger than 1, then it would drive the universe to expand/contract exponentially.

I would really appreciate any clarification on this matter!

Inflationary expansion is characterized by the fact that the expansion rate, quantified in terms of the scale factor, $a(t)$, is accelerating. That is, $\ddot{a} > 0$.

1) Inflation imposes no requirements on the global geometry of the universe. If the universe is closed, inflation just makes a much bigger closed universe. Locally, this has the effect of making the universe look more flat. And similarly for an open universe.

2) Inflation is special kind of expansion, namely, expansion with $\ddot{a} > 0$. From the Friedmann equation which governs the evolution of the homogeneous and isotropic universe, we can write the density parameter in terms of the scale factor as $$\Omega(a) = \left[1-3 ka^{1+3w}\right]^{-1},$$ where we've set the reduced Planck mass to unity. Here $k$ is the curvature parameter and $w$ determines the equation of state of the cosmological fluid, via $p = w\rho$ where $p$ is its pressure and $\rho$ is the density. For non-relativistic matter, $w = 0$; this is an example of "normal" un-accelerated expansion. You can see that if, say, $\Omega < 1$ initially, with $w=0$ the density parameter will get driven to zero as the universe grows under matter-dominated expansion.

If, however, the universe is inflating, we have $w < -1/3$. Of particular interest is the case $w=-1$, for which the inflationary energy density is constant (so-called de Sitter expansion). Here, you can see that $\Omega$ gets driven to 1. Here is a simple plot showing this behavior with $\Omega = 0.5$ initially, with $a$ along the x-axis and $\Omega(a)$ along y, 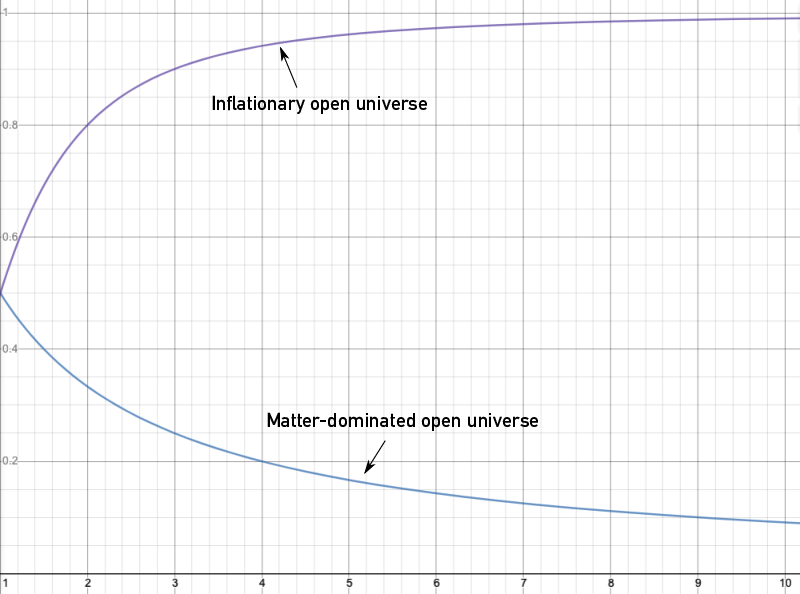 These same arguments carry over to closed models as well.

Not the answer you're looking for? Browse other questions tagged cosmology space-expansion curvature cosmological-inflation or ask your own question.