How do I find parameters for this Control Volume problem?

In the following series of questions:

"Under ordinary operation a steady flow of helium gas of 60 g/s passes from a large storage manifold through an expansion engine as shown in Figure. There are certain times when the engine must be shut down for short intervals, but not the inlet flow rate, however, flow rate can be decreased at such times and thus helium stream must be diverted. It is proposed to employ adjacent system that consists a large insulated tank (tank C) of 6 m3 capacity with a safety valve venting to the atmosphere through the plant ducting system. 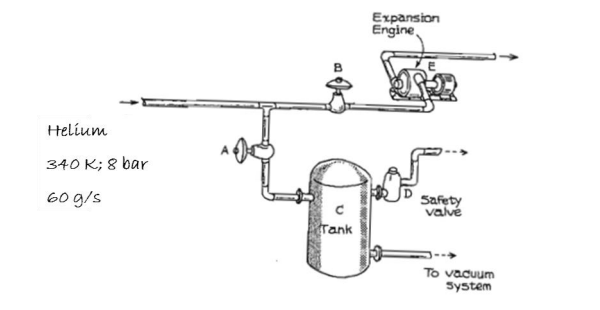 The emergency diverting system is operated in the following manner. If the expansion engine must be shut down (or operates improperly), valve B is shut and A is opened, letting helium into tank. When the pressure in C raises to 3.5 bar, safety valve D operates, venting gas. Initially tank C is evacuated to very low pressures. We shall assume that when gas enters in this tank, it is well mixed but has negligible heat transfer with the tank walls. Assume that helium is an ideal gas with a constant heat capacity.

(a). Write the suitable final form of energy balance equation for the process occurring in control volume C. How long will flow enter tank C before the pressure reaches to 3.5 bar and the safety valve opens. What is the temperature and mass of helium in this condition?"

In the next part,

(b) If the safety valve on tank C should operate, we would like to maintain a constant mass of gas in this tank equal to the mass at the time the safety tripped. The mass flow rate into the tank is, as noted above, 60 g/s, the flow rate from the safety valve is expressed as, $$ \dot m(g/s)= \frac{KAP}{T} $$ Where, K is a constant, A is the throat area of the valve, P and T are pressure and temperature in tank C. To keep the tank mass constant, the valve flow area A will be varied. What are the pressure and temperature of the tank C 10 s after the safety valve opens? Write the suitable final energy equation for this process. Write the expression for Area “A “to keep the mass of the tank C constant and find change in A with time.

Again using the Transient flow equation we get that,

The following part has:

(d) Find the total entropy change of the gas entering in tank, tank, gas leaving to surroundings, and the universe during the time between the opening of the valve D and a time 10 s later Write a suitable equation for finding entropy change for the above mentioned cases. The vented gas mixes with an infinite amount of air exterior to the tank and cools to 300 K and 1 bar. Assume the entropy change of mixing is negligible.

I used the Second Law for a control volume for adiabatic conditions to get,

However I have no idea how to proceed further as $ s_e $ is a function of T and I can't get a formulation for the same.

5
Thermo homework (HW) problem
1
Help with ideal gas law manipulation
2
How could be modelled this heat transfer problem?
1
Enthalpy-Internal Energy Conservation in an Open System
0
Understanding the physical process that takes place in this problem about ideal gases
0
Do throttling devices need valves?