Can We Explain Length Contraction in a Simpler Way?

I have been studying relativity from a decent amount of time and all the books have a common thing.That is, They explain time dilation in a simple independent way but for length contraction they explain it using muons reaching earth or they use the lorentz transformation to directly derive it,Or use time dialation for mathematical derivation ,What I want is not a derivation.I want length contraction to pop up intuitively..this is what I mean(I will explain time Dialation)

Relativity is there because we accept that velocity of light($c$) is constant and won't change for different frames, This simply directly pops out time dilation

If we study the two mirrors thought experiment in which we measure $c$ in a frame at rest (wrt the observer) by reflecting light on the mirrors and then measure it from a observer moving wrt the mirrors and find out that the distance that light has to travel In the later is greater than the distance it has to travel in the former,so to keep $c$ a constant, we know $c=d/t$ ,so If d is increased then t will also to keep $c$ constant and hence the time in the moving frame is greater than time in the rest frame..

Let's say two mirrors separated by a distance $L$(now the mirrors are like this >> | | and will move toward left or light along their length , now for a stationary observer, we measure the length through light going from mirror 1 to mirror 2 And $c=L/t$

Here's a visual demonstration that length contraction is required if
one assumes the Speed of Light Principle (so all light-signals at 45 degrees) and the Relativity Principle.

Each inertial observer is equipped with a Longitudinal light clock.
I use "rotated graph paper" because it is easy to draw light-signals...
in particular, it shows a coordinate system laid out by the ticks of the light clock at rest in this frame.
(When Bob's light clock is properly calibrated, the rotated graph paper can be used to do calculations in relativity.)

THOUGHT EXPERIMENT:
Two inertial observers agree to send light signals to each other 2 minutes after separating.

In this spacetime diagram, Alice is at rest, and Bob is moving (3/5)c with respect to Alice. The Relativity Principle requires that they agree on when they receive the other observer's light signal...they should report the same elapsed time on their own wristwatches.

Since Alice receives a signal at 5 minutes on her clock, whereas Bob receives it at a different elapsed time: 3.2 minutes on his clock, "absolute length" is not compatible with the Principles above.

Alice got Bob's signal too late and/or Bob got Alice's signal too early.
So, the ticks for Bob's clock are too large... they need to be smaller.
So, Bob's light clock must be shorter than Alice's light clock.
This suggests that there must be length-contraction.

(To get the actual length-contracted size [i.e. to derive the formula for length contraction],
you must choose the length of Bob's light clock so that the reception times are equal. It turns out that this occurs when their “light-clock diamonds” have equal areas.) 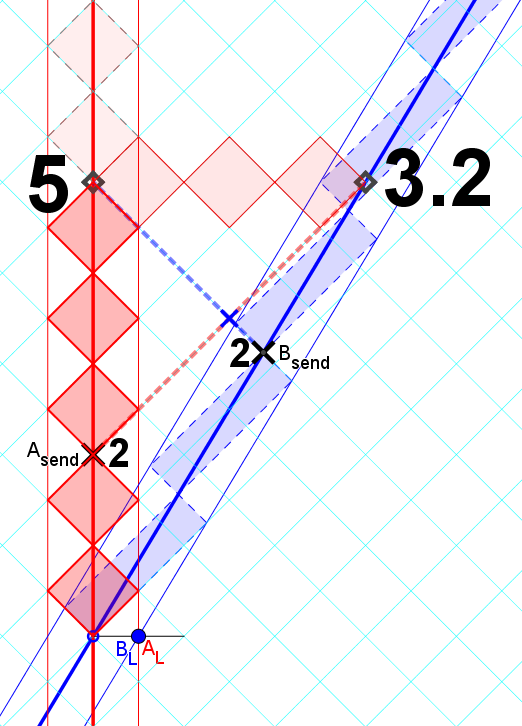 Now, let's say that the train starts moving, at a very high speed of 0.5c. Now, I make a assumption that the people outside the train can see the inside of the train. Let's say Alice and Bob are now in the train. They repeat the same experiment, and find that the train is 100 m long.

George and Del are outside the train, and George too is using his stopwatch to measure the time it takes for the beam to travel from Alice to Bob's detector. Alice's beam starts when the stopwatch shows $t=0$. But now the train is moving forward, so George sees Bob(who is at the end of the train), move towards the beam and catch up with it faster than if the train was at rest. Due to this observation, George's stopwatch shows him a smaller time interval between the release of the beam and it's detection. And so, doing the same calculation $l = ct$, George observes the train to be just around 86.6 meters long(see the figure).

Edit: If you want to totally generalize this, you can start by fixing Alice at the engine of the train and Bob at the rear of the train. Now, if the train starts moving right(in the figure it is shown moving left), then all you have to do is flip the train around in the x-direction. Doing this, we see that the same observation holds, and that the magnitude of the length contraction is the same. Because, the situation is symmetric in both the left and right directions.

Thus, the $vt$ term does not factor into the final magnitude of length contraction. It only factors when we consider certain points, not lengths(the difference of two points).

(PS: Please ignore my bad drawing. And the typo. The ppears is 'appears')

So, that is why George and Del observe that the length of the train has contracted

Not the answer you're looking for? Browse other questions tagged special-relativity velocity or ask your own question.