Does a Photon leave trace in a silicon tracker?

I am having this image from ATLAS Detector. 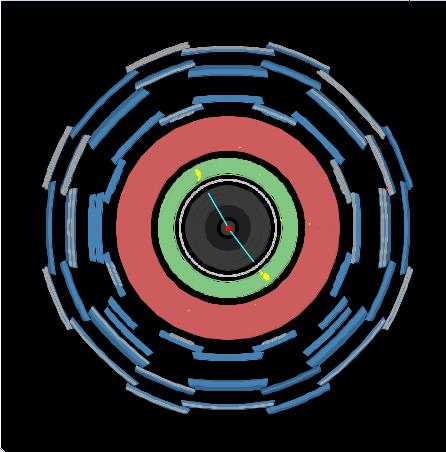 In gray you can see the ATLAS's Si Tracker.In Green you see the Electromagnetic Callorimeter. In red there is the Hadron Callorimeter and in Blue there are the muon Telescope.

Those two traces are suppossed to be elecrtrons. My question is, why cannot they be photons? Nuclear Physisists are using Si Detectors for gamma ray spectroscoopy, which means that they can actually detect photons, with them.

Just for the record, there is a cut in transversal momentum, of 10GeV...

Any ideas on why to reject those particles from being photons? 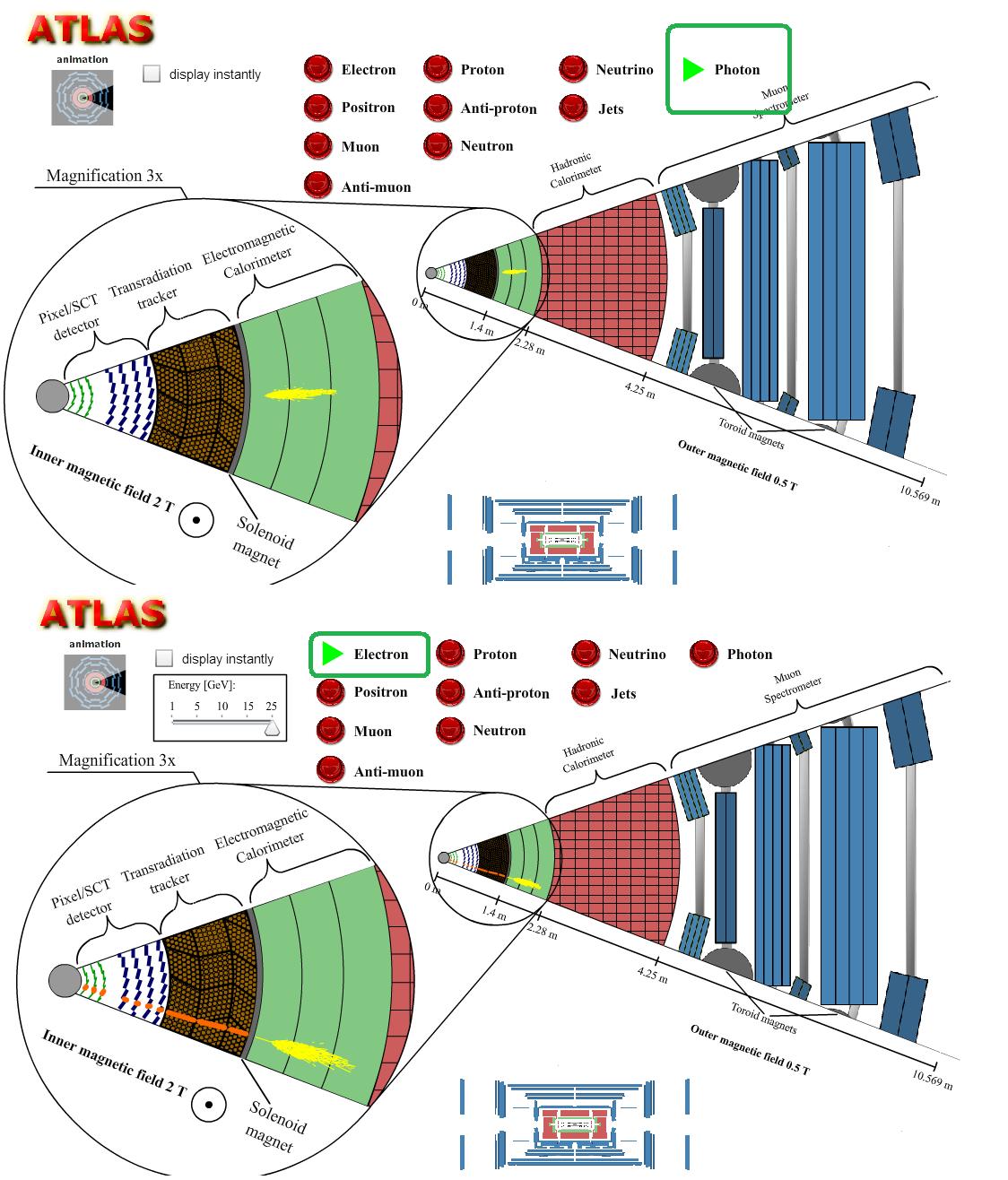 Here is what a silicon tracker is in particle detectors:

Most silicon particle detectors]1 work, in principle, by doping narrow (usually around 100 micrometers wide) strips of silicon to make them into diodes, which are then reverse biased. As charged particles pass through these strips, they cause small ionization currents which can be detected and measured. Arranging thousands of these detectors around a collision point in a particle accelerator can give an accurate picture of what paths particles take. Silicon detectors have a much higher resolution in tracking charged particles than older technologies such as cloud chambers or wire chambers. The drawback is that silicon detectors are much more expensive than these older technologies and require sophisticated cooling to reduce leakage currents (noise source) as well as suffer degradation over time from radiation.

So the tracks you see are an accumulation of points measured on strips of silicon diodes. Strips because the charged track should be disturbed as little as possible. Charged particle interaction with matter ionizes even if the distance traveled is microns, because the ionisation is a low energy interaction of the field of the charged particle, thus a point of the track can be recorded. A photon is neutral and the only way it could ionize would be with a head on collision with the electrons of the atoms in the silicon, and most probably a pair production would take place, and this is sometimes seen. But it cannot be used as a photon detector.

A tracker and a photon detector have conflicting prescriptions. The photon needs a lot of mass to materialize and create a cascade that will measure its energy, and that happens in the electromagnetic calorimeters of the detectors, in this case Atlas. They have a liquid argon material for detecting the charged cascades generated by the high energy photons. CMS has dense crystals for this purpose.

It should be noted that charged tracks are also detected in the electromagnetic calorimeters but can be separated from the photons because the tracks are measured in the tracker and the photons start being seen in the middle of the calorimeter ( not the edge).

In conclusion, no , the tracks you show have to be charged.

The processes by which this occurs are primarily scattering off of electrons, and at high enough energies by pair production. To a lesser extent scattering off of nuclei also contribute. As usual, a good reference is the chapter on "Passage of Particles Through Matter" (PDF link) in the Particle Data Book. The cross-section for various processes are shown in figure 30.15 of the 2012 PDB (figure number occasionally change, but the figure has been in there for a long time)

You might think that this would make distinguishing electrons and photons a challenge--especially at both will generate an electromagnetic cascade from there--and you would be right. However, if

then can be distinguished with reasonable certainty. You look at the energy deposition at the first few $\text{g cm}^{-2}$ of the track (less than one radiation length); most electrons will have a energy deposition around 1 minimum ionizing particle (MIP) in that range, while most photons exhibit 2 MIP (because the first interaction was probably a pair production).

If your spacial resolution is good enough and your detector diffuse enough, you may also be able to see the separation between the vertex and the onset of the cascade for photons, but this is difficult in many detectors. Anna v's answer suggests that this is the primary photon tag for ATLAS.

I believe that I heard in a talk that ATLAS also uses some geometric parameters of the shower in the ECAL to help with PID between electrons and photons, but can provide no reference. I'm not doing those big compound detectors right now and have not stayed abreast the details.

To answer the title question: yes---a photon can leave a signature in a silicon detector, as long as they're energetic enough to be ionizing.

Regarding the above image: I don't think you can tell, just from this image, whether or not the particle is a photon or electron. The reason why the detectors on these devices are so complex, is because you need a lot of data to determine exactly what's going on. Hopefully a particle physicist will chime in with what types of characteristics are required to distinguish between electrons and photons.

Not the answer you're looking for? Browse other questions tagged particle-physics nuclear-physics particle-detectors or ask your own question.

3
How does a noseblow counter detect alpha radiation?
42
How does one detect a single photon?
0
Trace of gamma particle
1
How can a positron leave a track in a bubble chamber without being annihilated?
0
Silicon detectors with charge division?
4
What is the difference between electrons and holes in silicon?
1
Spatial resolution of silicon pixels
1
Electron dressing and photon probing
2
Why can't indirect ionisation be seen in the silicon tracker of a HEP particle detector?