Doubts about a simultaneity thought experiment

I'm reading about how the concept of simultaneity breaks down in special relativity. Here's the relevant paragraph:

Consider a photon source $C_0$ in a train car situated equidistant between detectors $C_1$ and $C_2$. The source emits photons back to back. In a reference frame at rest with respect to the train car, photons arrive at the detectors simultaneously. In a reference frame at rest relative to the train station, however, which the train is assumed passing through, the photon source and the detectors are in motion with speed $v$ from left to right. The two frames synchronize their identical clocks when the origins of their coordinate systems coincide, whereupon the photons are emitted. Seen from the frame of the station, event $C_1$ happens before $C_2$; the photon first encounters detector $C_1$ moving toward it.

I'm a bit confused by the part in bold, though I might be wrong. I googled on how clocks are synchronized in the same reference frame, but I've heard that from the perspective of an inertial observer, time goes slower in another inertial reference frame moving w.r.t. them, so isn't it pointless to sync clocks across two reference frames moving w.r.t. each other?

Another aspect that I'm trying to get is exactly how does the platform observer come to "know" of the events in the train. (ref. following poorly drawn diagram) 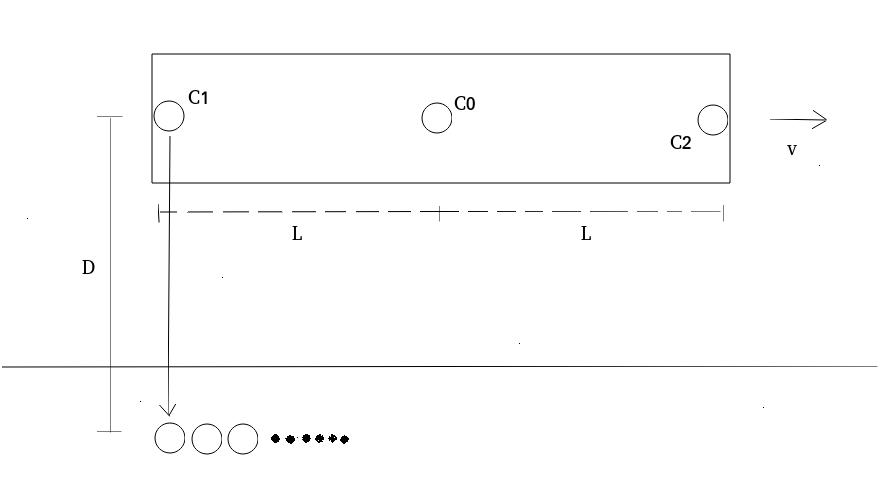 What kind of a setup can a platform observer use to find the time difference between $C_0$ receiving the two photons? Suppose there's an array of clock-detectors lined up on the platform parallel to $v$ and at a distance $D$ from the train - all of them synchronized in the platform's frame.

I'm not sure which of these options is correct, or whether both of them are wrong.

The Einstein method described in the text is used to synchronize clocks in different locations of the same frame. They could be used to syncronize clocks $C_1$ and $C_2$ in the train for example.

But the syncronization between clocks of the train and station is not made that way. A clock in the train can be used to synchronize with its pair at the station when the distance between them is vanishing small.(Hypothesys of x = x' = 0)

About the second question, the first signal to be decteted by one of the line of detectors is the green light $C_1$, before the red light $C_2$ as said in the text.