How can an object absorb so many wavelengths, if their energies must match an energy level transition of an electron?

I believe I have a misunderstanding of some principles, but I have not, even through quite a bit of research, been able to understand this problem.

My current understanding of transmission, reflection and absorption is as follows:

transmission occurs when the energy of an incident photon does not correspond to any electron's energy transition within the material. Therefore, the photon does not interact with the atoms / electrons and is transmitted through.

Absorption occurs when the incident photon's energy exactly equals that of an electron's energy transition. The photon is absorbed and excites an electron to a higher state.

Reflection I feel like my understanding is flawed, since I have read multiple different views. I believe that a photon is absorbed by an atom, exciting an electron. The electron, however, almost immediately transitions back into a lower energy level, emitting a photon of identical wavelength.

My question concerning reflection is:

Given a solid object that appears red to us (therefore reflects wavelengths somewhere between 625 and 740nm), how can it be possible that all other incident wavelengths are absorbed? They must be absorbed, since the only wavelength being reflected is in the "red" range, and I can clearly see there's no visible light being transmitted through the object. However, in my knowledge, the wavelengths can only be absorbed if they correspond to the energy transition of an electron, which is not the case for every wavelength in the visible spectrum.

How is it then possible that they are absorbed? Additionally, if the electron is excited to a higher level, does it just store the energy? Does it take thermal form??

I assume that perhaps I cannot simply apply these principles of absorption, that I was taught only in relation to a single atom, to a complex body consisting of billions of atoms. Could someone elaborate on this and explain my questions about absorption and reflection? Thanks very much!

Your misunderstanding is very common and quite easy to make. Basically, what students are usually introduced to first is the thermodynamics of ideal monoatomic gasses. This is good because it is simple and easy to understand, but can be problematic because features specific to the simple substance can be misunderstood as general features of all substances.

In an ideal monoatomic gas light can interact either by scattering or by absorbing an amount of energy corresponding to an atomic transition*. Note, in the latter case the photon is not absorbed by the electron but by the atom as a whole because the atom has different internal states corresponding to the absorbed energy. As a result ideal monoatomic gasses tend to be transparent except at a few narrow** frequencies.

Now, consider a molecular gas. Just like an atom has internal states that an electron does not, similarly a molecule has internal states that an atom does not. Some states correspond to electron transitions in the molecule, but others correspond to rotational or vibrational modes. The molecular electronic transitions combined with the molecular vibrational and rotational transitions gives rise to a multitude of absorption lines, often forming continuous absorption bands, so many times these are visibly not transparent.

Now, consider a solid. Just like a molecule has states that an atom does not, similarly a solid has states that a molecule does not. The rotational and vibrational modes gain additional degrees of freedom and can act over fairly large groups of molecules (e.g. phonons). These states can have energy levels that are so closely spaced they form continuous bands, and are called energy bands. Any energy in the band will be easily absorbed. This makes most solids opaque as they absorb broad bands of radiation.

Finally, when a photon is absorbed it may be re-emitted at the same wavelength to fall back to the original energy state. However, if there are other energy states available then the energy can be emitted and retained at different energy levels. For example, a UV photon could be absorbed and a visible photon could be emitted along with an increase in a rotational degree of freedom.

*Even for an ideal monoatomic gas there are other less common mechanisms like ionization and deep inelastic scattering, but for clarity these are neglected here.

**Note that even for an ideal monoatomic gas the frequency bands are not infinitely narrow but have some breadth. This is caused by two factors. First, the width of the peaks is fundamentally limited by the time-energy uncertainty relation which says that $2 \Delta T \ \Delta E \ge \hbar$ where $\Delta E$ is the width of the energy band and $\Delta T$ is the lifetime of the transition. Second, random thermal movement of the gas will cause Doppler and pressure broadening of the frequency band.

The other answers cover almost everything, but I would like to add that at any temperature above absolute zero, there is a degree of line broadening caused by Doppler shift: some of the atoms are moving towards you, and others away, and that will mean that in your reference frame they can absorb many different frequencies of light. This is important in astronomy.

Dale and Arpad already gave great answers, but I want to correct something that you said that also contributes to your confustion:

transmission occurs when the energy of an incident photon does not correspond to any electron's energy transition within the material. Therefore, the photon does not interact with the atoms / electrons and is transmitted through.

This statement is not correct. The reality is more close to the statement you gave in reflection:

I believe that a photon is absorbed by an atom, exciting an electron. The electron, however, almost immediately transitions back into a lower energy level, emitting a photon of identical wavelength.

This absorption of energy and re-emission is called Rayleigh scattering, and the re-emitted photon can be emitted in any random direction (with the probability distribution following the antenna radiation distribution). However, because this happens in multiple atoms, the waves constructively interfere only in the forward direction, and destructively interfere in any other direction. This is explained wonderfully by Boyd in his nonlinear optics book: 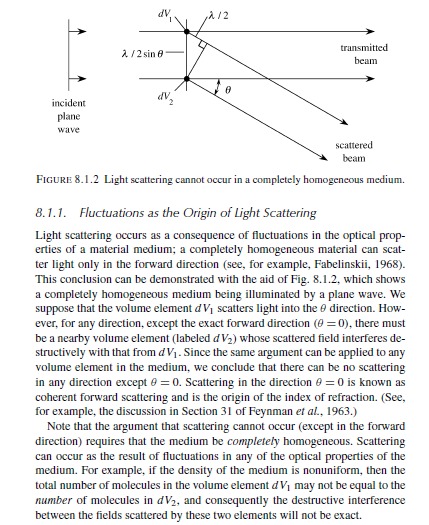 You have a lot of questions, I will answer as many as I can.

Now you are asking why a red object is red. Now it is very important to understand that reflection is elastic scattering, and mirrors (most metals) do not have their own color, they just reflect all incident light. Gold, and some other metals are exceptions.

It is very important to understand that a white wall will appear red, if you shine red light on it. What happens then, is that the atoms on the surface absorb all the red wavelengths, and re-emit the same. The white color wall is able to do that, the atoms are able to re-emit the same wavelength photons as they absorbed.

In the case of the wall, this is diffuse reflection. Mirrors, do specular reflection, which is elastic scattering.

In your case, the wall does diffuse reflection, and most of the photons get absorbed and re-emitted in random directions. Mirrors, elastically scattering, keeping the energy level, phase and relative angle of the photons, this is the only way to keep a mirror image.

Not the answer you're looking for? Browse other questions tagged quantum-mechanics optics electrons reflection absorption or ask your own question.

2
What factor decides that when will scattering happen and when will reflection?
1
Can electrons transition within energy bands, or must they transition from one band to another?

2
Hydrogen transition and photon behavior
4
Differences between absorption, transparency, reflection, and emission
15
Can an electron jump to a higher energy level if the energy is insufficient or exceeds the $\Delta E$?
8
What “happens” to the energy of a photon after it is absorbed?
1
Energy Levels: Reflection or Absorption and Emission / Color of Objects and Emission Spectrum
1
fluorescence wavelength limit
0
Is reflection just a re-emitted wavelength at the electronic scale? Does reflection require absorption in the first place?
1
Can electrons transition within energy bands, or must they transition from one band to another?