Do Newtonian mechanics and thermodynamics have different definitions of internal energy?

This question comes out of a discussion under one of my answers here on PSE. My original understanding of internal energy went something like this:

However, this latter case caused some confusion, and a user said to me in the discussion:

... In thermodynamics $U$ specifically refers to internal energy of a substance or object at the microscopic level and does not include gravitational potential energy.

Maybe the crux of the issue is what the word "internal" should include, rather than on "thermodynamic" versus "Newtonian."

If we're considering a gas in a container sitting in a lab on the surface of the earth, we might choose to consider the earth's gravity as an "external" influence (because the earth itself is "external" to the system of interest), and then we would not include gravitational potential energy in the "internal" energy of the gas.

On the other hand, if we're considering a gas whose "atoms" are stars in a cluster of astronomic proportions, then we would consider their mutual gravitational interactions as "internal" to the system, and therefore we would include the gravitational potential energy. By the way, this is an interesting example in thermodynamics, because this system has a negative heat capacity: adding energy makes it colder. (This is related to the prediction that an evaporating black hole gets hotter as it gets smaller.)

Whatever language we use, the key point is that we separate all the stuff in the scenario into two categories: one category is the stuff whose behavior we're interested in, and the other category is all the other stuff that might influence the behavior of the stuff that we're interested in. The words "internal" and "external" are sometimes (but not always) used to distinguish between these two categories. Sometimes the word "system" includes both categories, and sometimes it only includes the first one.

I don't think that thermodynamics considers only microscopic interactions.

The above equation is only valid for earth-gas system.

In Newtonian mechanics you can certainly refer to the total energy of an earth-object system as the "internal energy" of the system if you wish. My concern is for the use of $U$ to represent the internal mechanical energy of the system as a whole may lead to confusion to thermodynamicists where $U$ is generally reserved for only the energy contained within the object, as discussed further below.

As I understand it, in mechanics the total mechanical energy of the earth-object system would be generally be written

or, for a non-isolated earth-object system

This is depicted in FIG 1 below.

The $W_{ext}$ in the Newtonian equation does not account for external work that expands or contracts the boundary of the object, called $pdV$ work, and other types of work that cross the boundary of the object itself, since the object is typically described as a "rigid body" in Newtonian mechanics. $W_{ext}$ generally only accounts for the effect of external work on the kinetic and potential energies of the rigid body as a whole.

Nor does the right side of the equation account for the possible effects of energy transfer by heat $Q$ to or from the object-earth system, which is to potentially change the internal energy of the object.

Those aspects missing in the Newtonian equation are included in the general expression for the first law of thermodynamics for a closed system (no mass transfer between system and surroundings) which is :

This is depicted in FIG 2 below. Note that FIG 2 encompasses everything in FIG 1 but also includes those aspects of the conservation of energy missing in FIG 1 related to the energy internal to the object. Moreover, $W$ in this equation includes not only work that effects the mechanical energy of the system ($W_{ext}$) in FIG 1, but other types of work transfer that crosses the external boundaries of the object. 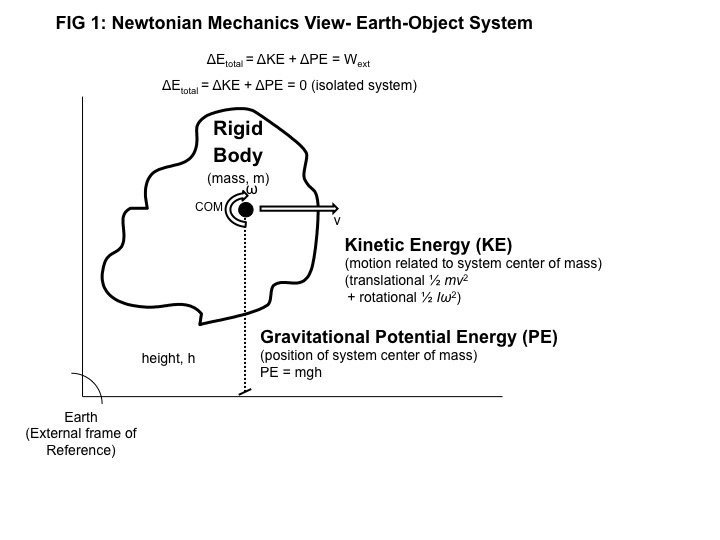 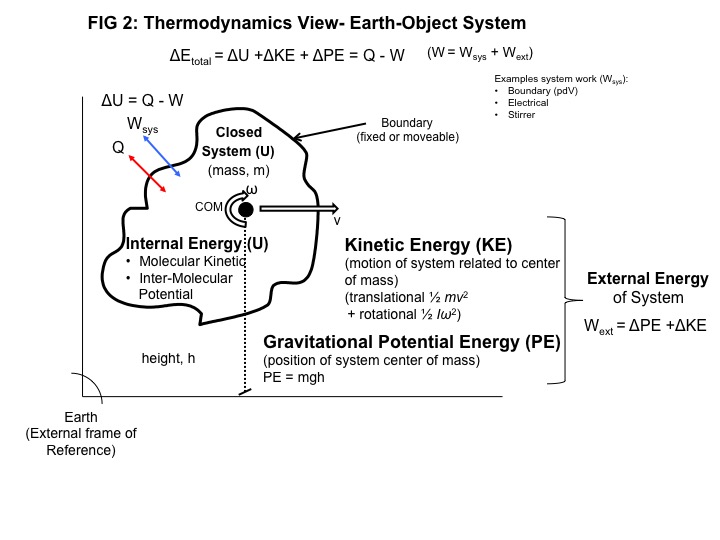 I think it can be seen both ways, depending on the focus of the discussion.

Conclusion
As it often happens in physics, there is no really disagreement of definitions, but one has to be careful about where and how they are applied.

Not the answer you're looking for? Browse other questions tagged newtonian-mechanics thermodynamics energy potential-energy definition or ask your own question.