What if I insert more charge into a charged capacitor?

Suppose we have a charged capacitor with charge = $Q_1$ and then an electron beam inside the positive plate of the capacitor.

The electrons entering the positive plate are repelled by the negative plate then the incoming electrons will circulate through the circuit charging the capacitor again at a charge $Q_2 > Q_1$.

So by the relation: $$Q = C * V$$ If $Q$ increases then $C$ or $V$ have to increase proportionally, as $C$ depends on the dielectric and the geometrical characteristics of the capacitor, so I think that the voltage on the capacitors has to increase.
Am I right?

If I'm correct, what happens to the source voltage? Is it maintained or increased or is there a short circuit? 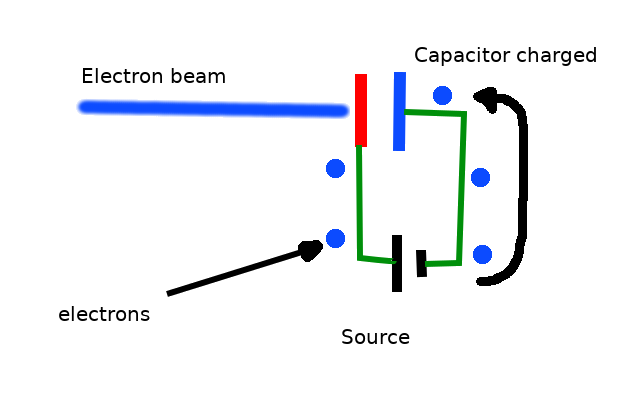 Not the answer you're looking for? Browse other questions tagged electrostatics electrons charge capacitance or ask your own question.