Ionized Depletion Region, Why aren't those charged being excited?

Ok so I understand the PN junction, and how when 2 Semiconductor materials are placed together the Electrons will jump into the Holes near the junction creating a Negatively Ionized Atoms on the P-Side (Near the Junction) and Positively Charged Atoms near the Junction on the N-Side.

How come these Ionized Atoms aren't Displacing Electrons to create more holes (In the Ionized P-Side) or Accepting more electrons (In the Positively Ionized Region on the N-Side)?

Every Book/Semiconductor Physics book i've read talks about how the Ionized Atoms are fixed to the lattice (Makes sense)....but it doesn't say why THEY themselves aren't changing due to thermal excitations at room temperature.

I guess im confused how the electric fields are stable...when room temperature is what excited the electrons in the first place.

How come these Ionized Atoms aren't Displacing Electrons to create more holes (In the Ionized P-Side) or Accepting more electrons (In the Positively Ionized Region on the N-Side)?

So why then do the electron from the n-side stay with the acceptor atoms on the p-side once the junction has formed?

The short answer is because the carrier trapped by the dopant atoms would have to gain almost a bandgaps worth of energy to de-ionize. 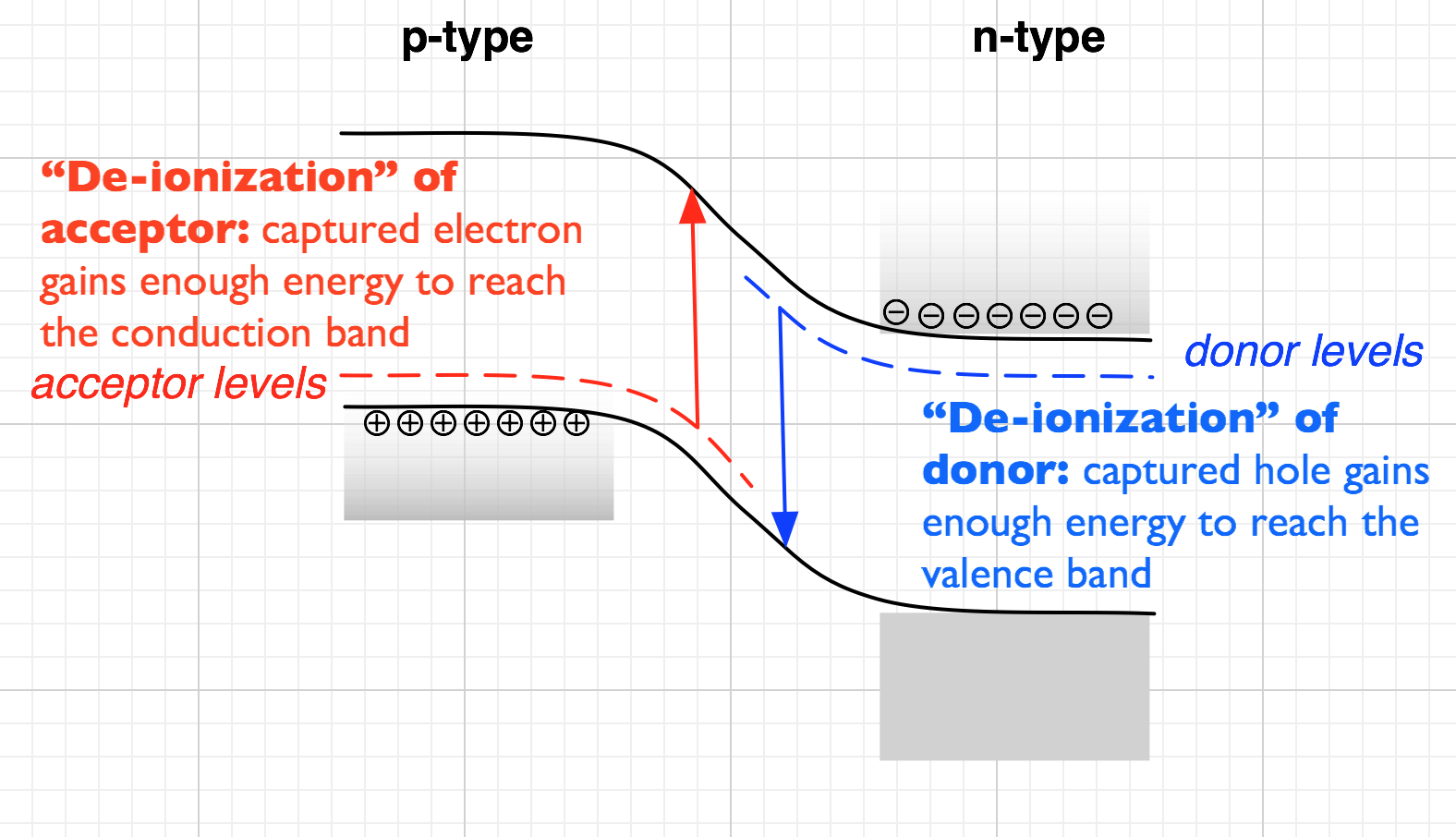 The longer answer. Let's assume an acceptor atom in the p-side depletion region de-ionises by giving up it's captured electron. What happens? The electron is pushed back to the n-side by the field. However, the system is now no longer in equilibrium because the p-side is charged to +1 and the n-side is charged to -1. This is not stable! You can see that if you run this forward in time, eventually an electron from the n-side will have to neutralise the acceptor, bringing the material back to charge neutrality.

When you solve the Poisson equation for the pn-junction this is what you are solving for: the equilibrium distribution for charge neutrality. There are probably carrier dynamics like de-ionisation happening but they only serve to push the system out of equilibrium temporarily, eventually equilibrium will always be restored.

If a charged particle is in an electric field, then that field affects makes a contribution to the energy, in addition to the purely kinetic energy it has ($m v^2/2$). Written this way (and ignoring factors of 1/2, etc...),

This says that, at higher temperatures, charges are likely to be moving faster, or be in higher potential regions, or a little of both. Charges cross the P-N junction through simple diffusion, which is related to their velocity $v$. The more charges that move across this junction, the higher $\phi$, the electric potential (a measure of the electric field) becomes. This means that as more charges migrate and establish a large potential, the less velocity particles in those regions tend to have, for a fixed temperature $T$. So while there is still significant temperature in the region, it is no longer manifest purely as kinetic energy. With diminished kinetic energy, diffusion takes place more slowly, and so eventually, charges no longer cross the P-N junction (this is when the junction is in equilibrium).

Alternatively, you can look at it like this: charges cross the P-N junction, creating an electric field across the junction. However, the establishment of this field impedes the crossing of more charges. At equilibrium, the drift velocity of charges due to the electric field exactly counteracts the diffusion drift velocity. So, your hot electrons are bouncing out and trying to cross over, but the accumulated charge opposes the crossing, and your electron settles back where it came from.