Friction acting between road and tyres of a car 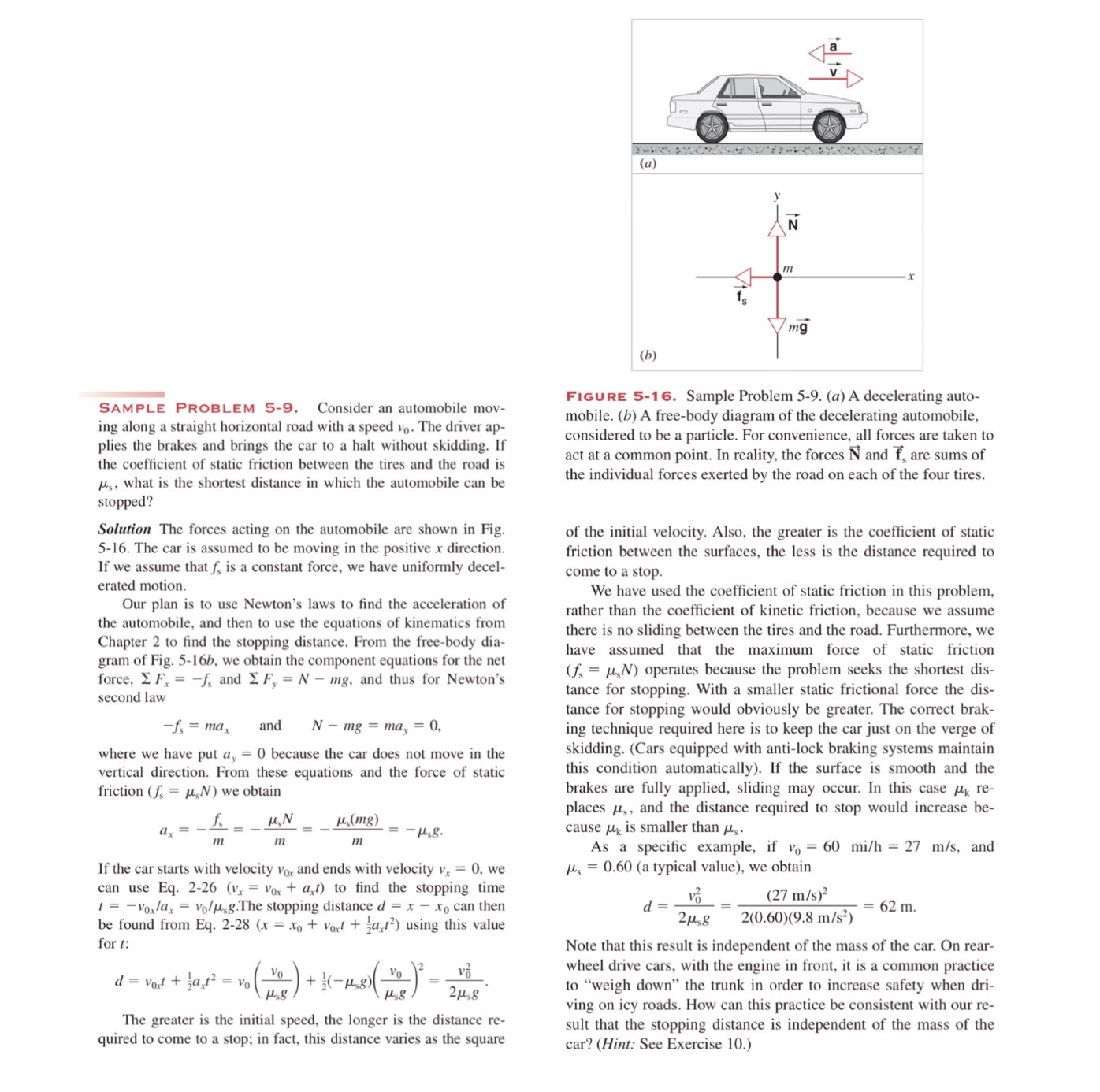 This is a sample problem from the book by Resnick Halliday & Krane (5th edition), page no 98-99.

I understand the kinematics and force equations used in this problem. I don’t understand a few things.

1) How did they come up with that FBD (free-body diagram) for the horizontal forces acting on the car? I think the FBD (figure 5-16) shows the forces acting on it when brakes are applied. If I am correct, when the car is in motion, there is static friction acting between its rear wheels and the road, in the direction of its motion. And there is another static friction force acting in the opposite direction between its front wheels and the road. So how did they come up with that FBD to show that there is only one friction force in the direction opposite to the motion of the car? Also, when brakes are applied, the braking pad presses against the wheels right? How does the interaction between braking pad and the wheels explain the friction between tyres and the road that they have shown in this free-body diagram?

2) The correct braking technique required here is to keep the car just on the verge of skidding.

Again, how is it possible to do that because when brakes are applied, breaking pad interacts with the wheels. How can applying the brakes keep the car just on the verge of sliding?

So how did they come up with that FBD to show that there is only one friction force in the direction opposite to the motion of the car?

A rolling wheel that isn't slipping has a wheel periphery speed exactly matching the (relative) speed of the surface. Otherwise each point on the wheel would not be standing still on the surface in the momentary moment it touches the surface. And then it wouldn't be rolling, but sliding.

Source: All That Matters Academy

How can applying the brakes keep the car just on the verge of sliding?

where the normal force $n$ is the measure of how hard the pads are pressed onto the surface. When pressed harder, the rim-material must exert a larger normal force $n$ to not avoid bending or breaking, and so $n$ increases. Thus, the kinetic friction force $f_k$ increases.

And when that kinetic friction increasing, the counteracting torque due to that friction force increases. Use Newton's 2nd law in its rotational version to see that a larger coutner-torque causes a larger negative angular acceleration and thus a faster slowing down of the wheel rotation.

And thus a faster slow-down of the car itself, since a larger static friction appears at the wheel-and-ground to avoid any sliding of the wheel over the ground. The harder you press your braking pedal, the larger this static friction becomes - it is adjustable with your pedal pressure.

Remember that static friction has a limit:

The required static friction for slowing the car down so the wheel doesn't slide must be lower than this maximum limit. If you brake harder, then the static friction becomes larger, but that's no problem if you stay below this limit. The car will slow down faster as expected.

But, if you brake so much, that the static friction must increase more than what is possible for it - it must increase to above its maximum limit to cause the slowing down of the car that is required to prevent wheel sliding - then it can't do it. Then static friction gives up. Then kinetic friction between wheel and ground takes over. And this means sliding, and rubber burning.

If you try to reach this limit while braking, then you might surpass it - and then you'll feel a sudden loss of traction when the static friction disappears and kinetic friction takes over.

6
Does a car use friction to move?
4
Why does friction cause a car to turn?
1
What is the direction of static friction?
3
Is static friction the only force causing a car to move (without sliding)?
0
Why is skidding considered kinetic friction when braking on a car?
0
Braking car and the force of friction - front-wheel-drive
2
Rolling resistance and friction force in FBDs
2
How can friction be the driving force of a car, while at the same time slowing it down?
0
Is rolling friction enough to make a car turn?