Why does string not wick down?

I regularly drink tea at work and I often reuse the tea bags (yes I know I'm a cheapskate). Yesterday afternoon I used a tea bag once and kept it in the cup in case I wanted another cup before I left. As it turned out, I didn't and the tea bag was still there when I came into the office this morning with a very curious pattern of discoloration.

I believe I understand most of the process; over night, the bag was drying out with the upper portion drying most quickly and the liquid from the leaves wicking up the bag and into the string. As the process continued, progressively more suspended solids were carried up the system and deposited near the top where the rate of drying was most rapid. As a result, there is a dark line of tea deposits around the upper edge of the bag and on the string. Oddly, though, the deposits very abruptly stop at the edge of the cup where the string drops to the dangling tag. Close examination reveals that this discoloration stops not exactly at the edge of the cup (as might be expected if contact with the cup were the cause) but slightly beyond it where the string descends. The only reason I can think of as to why this should be so is that the wicking action responsible for the discoloration of part of the string, stopped at that point. But why should this be? After all, a siphon ONLY works when the receiving end is below the apex. Am I wrong in my assumptions? Or does anyone know:

Why does a string not wick down? 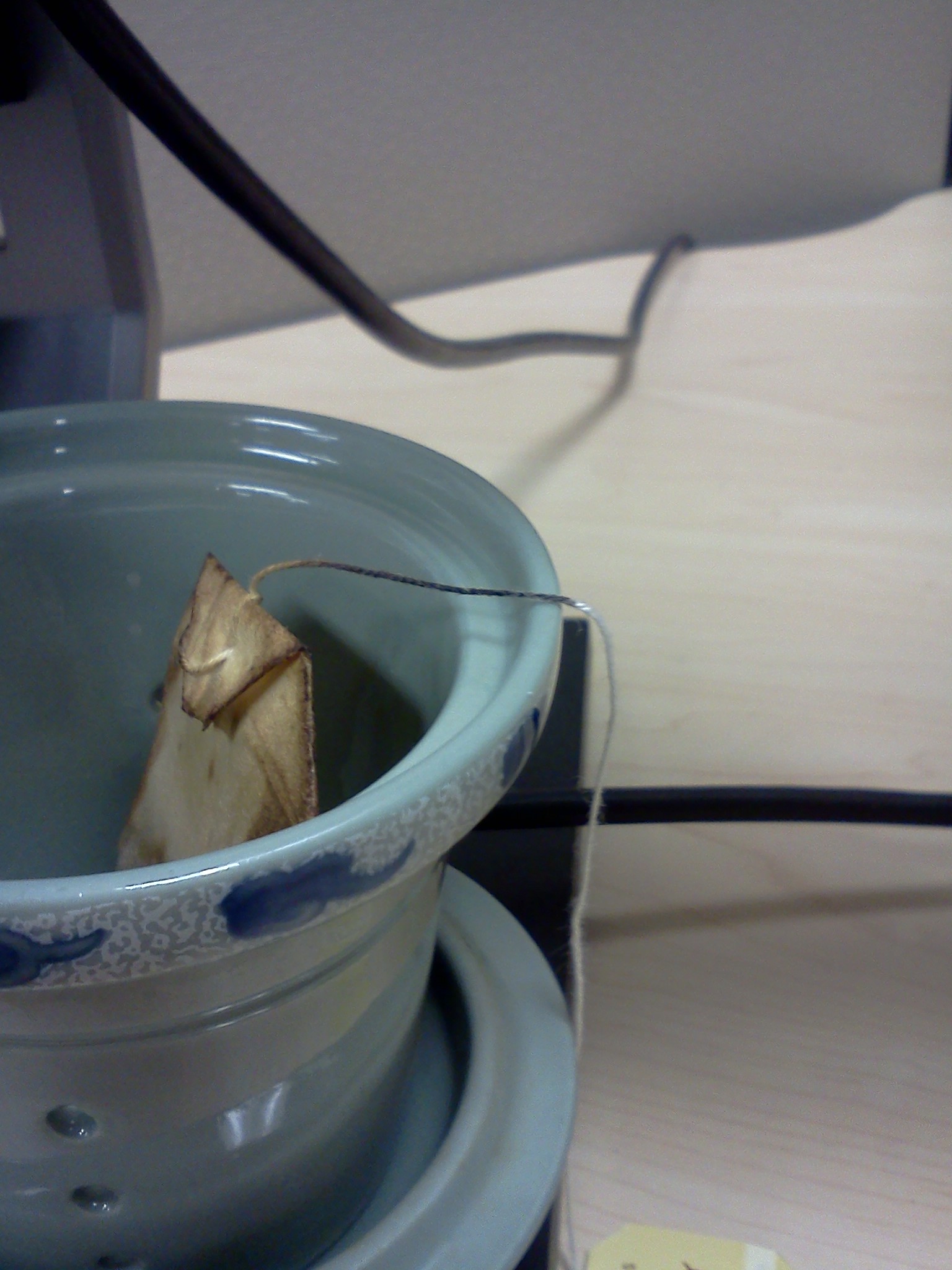 The wicking is not occuring because of a siphon action. Rather, capillary action is responsible. The abrupt stop at the edge of the cup has two likely explanations; one -- all your solvent evaporated before capillary action wicked solute that far, or two -- The cup preserves a higher relative humidity within, which drops abruptly outside the cup, thus preventing fluid from wicking any significant distance once it gets outside the cup.

Perhaps because oils from your fingers have interfered with the wicking, and that is where you held the string.

It will wick down, if the wicking action is strong enough. To demonstrate this with a stronger wicking action, get a one-inch wide strip of paper towel. Fold it over so one end goes to the bottom of the cup or glass, and the other end goes down to the desktop. Now pour in water (or tea) to fill the cup, and come back in an hour to see the result.

Okay, so it turns out that the stopped wicking was not from the downward portion of the string, but from the portion of string that was already wetted. I guess the question, then, becomes why does string only wick where wetted?

Not the answer you're looking for? Browse other questions tagged fluid-dynamics surface-tension capillary-action or ask your own question.

35
Why does water pouring from a glass sometimes travel down the side of the glass?
16
Why does water flow out of an upside-down bottle? (Rayleigh Taylor Instability)
1
Why does water make a liquid film?
1
Why does water hold up between the teeth of my comb?
4
How fast does liquid rise in a capillary tube?
0
Why does solder wick absorb solder?
0
How does a sponge absorb water?