I have Yet Another Question about FTL communication, causality and sending a message into your past. I've read this article and this excellent answer and I understand why it's possible to find a reference frame from which a given effect may appear to precede its cause. However, I haven't been able to make the mental leap from that to being able to meaningfully send information backwards in time.

Here's where the article ends: 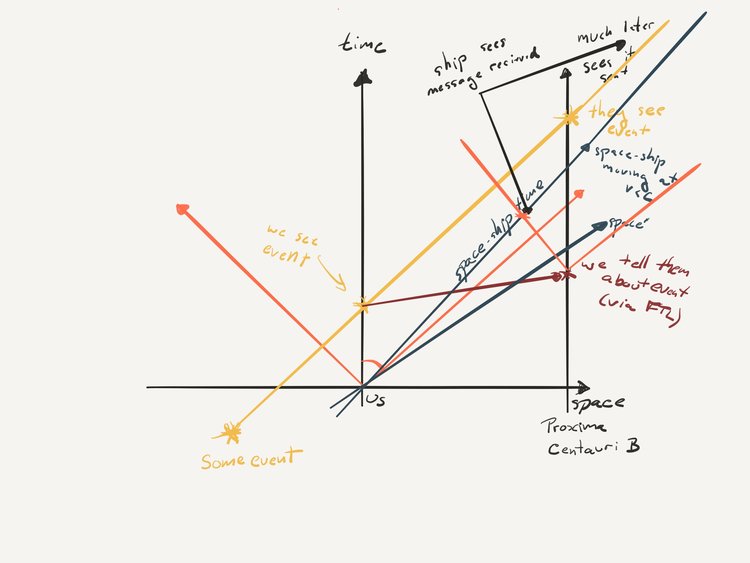 If you could travel or communicate FTL, you can time travel, or at least communicate backwards in time. And that would be troubling - and doesn't seem to be the Universe we live in.

Assume that FTL communication has some constant non-zero travel time associated with it - it's not instantaneous (i.e. $1s / LY$). An observer $O$ traveling at relativistic speeds will see the phone call from $A$ to $B$ arrive at $B$ before they see the call being made. But even if they were told of its arrival at FTL speeds, by the time they could turn around and send a message to $A$ and have it arrive, it's too late for $A$ to act on it.

So from the perspective of $O$, they may be sending "Don't call $B$" message back into $A$'s past, trying to create a paradox, but it won't arrive in $A$'s past, from $A$'s perspective, and thus no paradox. Even from $O$'s perspective, they will observe $A$ placing the original call before they observe $A$ receiving their "don't call" message - it just might not happen until after $A$ sends a FTL message back saying "why did you say that?"

From a fourth perspective ($O'$), the "Don't call $B$" message may arrive before $O$ sends it (even if the notice from $B$ to $O$ hasn't happened for $O'$ yet), but in that frame they would still see it arrive after $A$ makes the original call.

What am I missing that leads to an actual paradox, or taking advantage of the causality violation in any way?

Browse other questions tagged special-relativity faster-than-light causality or ask your own question.

11
The relativistic principle of causality

57
How does faster than light travel violate causality?
1
Would one-way FTL travel be safe from a causality standpoint?
4
Can FTL-Communication between two points in the same frame of reference break causality?
1
Can we prove absolutely that FTL = causality violation
0
Causality (time travel) question