Can we assume a force to already be negative before knowing the value of it? [closed]

Ask Question
Asked 2 months ago
Active 2 months ago
Viewed 25 times
-2
$\begingroup$
Closed. This question is off-topic. It is not currently accepting answers.

Let me make my question clear by the following example:- Let’s take a case of an individual who is in an elevator accelerating downward with some acceleration ‘ a ‘ such that ‘a’ < g . Let’s take the downwards direction as positive and let the normal force be ‘N’ the equation would then be mg - N = ma => N = m(g - a) Let’s say m = 60 kg , g = 10 m/s^2 , a = 5 m/s^2 Then, N = 60(10 - 5) => N = 300N , which does kind of make sense because you lose weight when accelerating downwards. But the question is why did my answer come out to be POSITIVE 300N , it should have been negative 300N , because I took the downward direction as positive. Isn’t this a mistake of me just assuming that ‘N’ = -N in my equation in the first place. This is wrong right, I cannot assume my force to already be negative,if it is truly negative, the answer will come out to be negative. Shouldn’t the equation then be N + mg = ma [ taking the same sign convention just taking N as N and not - N since Net force is = SUM of all the forces and not the difference] Then I would get N = m(a - g) = 60(5 - 10) which = - 300 N , which should be the correct answer. But every video I’ve seen on elevator physics just uses mg - N and gets a positive value of N but that’s wrong, isn’t it? The problem in this comes when we’re dealing , let’s say 2 masses fixed in a pulley such that m2 > m1 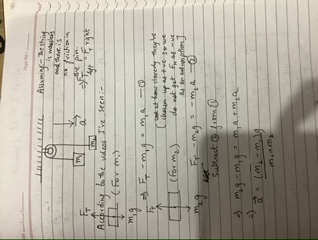 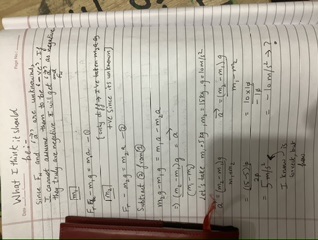 I know that 5 m/s^2 is correct, but why did I get a positive answer because even the other mass is accelerating in the opposite direction. Yay did I get my acceleration which is correct for 1 mass? After solving, should I just say that that acceleration of the other = -5 just since it’s in the opposite direction without showing any calculation? Can you assume a negative sign on a force without knowing its value? I’m asking this because suppose you have a mass 5kg and acceleration: - 5 m/s^2 . Then to calculate force you would do f = ma = 5 x (-5)= - 50N and not : - F = ma => F = 5 x (-10)/-1 = 50N which is clearly wrong. So just because I know that my force is going to be negative,I can’t write -F = ma,instead,i just solve F =ma and automatically get my force to be negative which was my objective. Similarly,in kinematic equation problems,suppose u = 0 m/s a= -5 m/s^2 t = 5s v = ? I would do v = u + at = -5 x 5 = -25 m/s and not : -v = u + at Which would give me a wrong positive answer. So why can we assume a force to be negative?

If you use -N, you are assuming the force is directed upward and are forcing a positive number for N. But it doesn't really matter what you assume: if you just use N, N comes out negative and if you use -N, N comes out positive. In either case, in the equation for the sum of forces on the person in the elevator the normal force contribution is -300 if you use the downward direction as positive (which you did by using +mg for the person's weight).

Not the answer you're looking for? Browse other questions tagged forces mass acceleration velocity conventions or ask your own question.