Is it true that gauge boson mix only around after the electroweak symmetry breaking, while mathematics do not explicitely state that?

Is it true that gauge boson mix only around after the electroweak symmetry breaking, while mathematics do not explicitely state that ?

So what is the explanation ?

Answer from an experimental physicist:

One has to note that the photon was experimentally determined from measurements to be a particle of zero mass involved in electromagnetic interactions.

It helps to look at the history, of how three gauge bosons and a photon were proposed for an SU(2)xU(1) symmetry:

In 1964, Salam and Weinberg had the same idea, but predicted a massless photon and three massive gauge bosons with a manually broken symmetry. Later around 1967, while investigating spontaneous symmetry breaking, Weinberg found a set of symmetries predicting a massless, neutral gauge boson. Initially rejecting such a particle as useless, he later realized his symmetries produced the electroweak force, and he proceeded to predict rough masses for the W and Z bosons. Significantly, he suggested this new theory was renormalizable.

So the existence of a photon is in no doubt.

Identifying the photon with one of the four unbroken gauge bosons is not possible, as before symmetry breaking charge is a composite of weak hyperharge and weak isospin as defined when all gauge bosons are of mass zero.

The above spontaneous symmetry breaking makes the W3 and B bosons coalesce into two different physical bosons with different masses – the Z0 boson, and the photon (γ),

where $θ_W$ is the weak mixing angle.

Here is how charge is identified after symmetry breaking 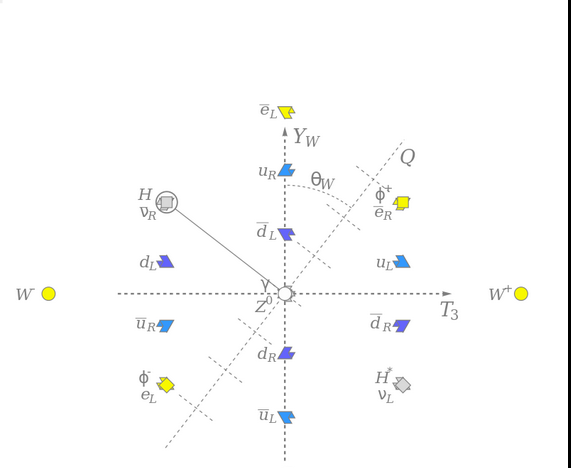 The pattern of weak isospin, $T_3$, and weak hypercharge, $Y_W$, of the known elementary particles, showing the electric charge, Q, along the weak mixing angle. The neutral Higgs field (circled) breaks the electroweak symmetry and interacts with other particles to give them mass. Three components of the Higgs field become part of the massive W and Z bosons.

So even though zero mass gauge bosons exist before symmetry breaking it is not possible to identify one of them to the photon. It is combination according to the matrix above that ends up into being the experimentally observed photon.

As experiments at the LHC are nearing energies where the primordial quark gluon plasma can be studied, maybe in future higher energy colliders there will be some experimental evidence in the distributions of the change before and after symmetry breaking.

Lets start of with what particles we had before the symmetry breaking before the Higgs was powerful long, long time ago. This was the time when the so called graviton of the gravitational force and gluon of the strong force decided they no longer wanted peace with the other forces. They left and the electroweak force were having a happy time. Both of them were powerful. Electroweak had 4 enforcers of its force. W1, W2, W3, B. Then at this time the Higgs grew powerful as the hot universe kept expanding. More space for the same amount of radiation and bosons. Higgs already made a weak connection with the quarks which were starting to form the instant strong nuclear force left the other forces. The quarks were not the quarks we know today. So the W3 and B bosons started thinking of changing their identities. Then the Higgs knowing Electroweak plans let them create new particles. By the time the W3 and B were turning into the photon and the Z boson the Higgs came along. The Higgs added goldstone bosons to the Z boson as well as to the W bosons that were created due to the mixing of W1 and W2. The Higgs also gave the two W bosons charge. Now the Weak force split from Electromagnetism. The photon was forever destined to be alone. By now all the matter and antimatter particles were created. Now it was the Higgs bosons' job to use the weak force and send the remaining goldstone bosons at the fermions and antifermions. The fermions new the weak nuclear force was no longer working for them. It was working for the Higgs. At least the fermions found an ally. Electromagnetism and Strong force sometimes became friends with the fermions. By this time Higgs bosons found a way to use fermions allies to get rid of the antifermions so it could get even more powerful and try to prevent massless photons and gluons from stopping the Higgs. And now we get a Higgs that give us and all the fermions mass. Still the Higgs has some energy and could get even more powerful. Also the Higgs kept some mass for itself.

So all in all, the Higgs always existed before the Electroweak separation. It just was not as powerful as the other forces until it found a way to separate the weak force from electromagnetism. Then it found a way to give mass to all the fermions and the Weak force bosons and also the Higgs boson itself.

9
Is there a rest frame for the Higgs boson?
1
Higgs field - the vacuum expectation value
2
What happens to Goldstone bosons in the Higgs potential after symmetry breaking?
5
Higgs-Mechanism: Why are gauge boson masses not protected by gauge symmetry
6
According to the Standard Model, were there 4 Higgs bosons at the beginning of the universe, before the electroweak symmetry breaking?