Usually, in particle physics, people do not care about a constant term in scalar field potential. Rather, attentions are paid to the local profile at the minimum. But in the context of cosmology, the absolute value of the potential has a physical meaning; it is a cosmological constant and can cause the Universe to accelerate or decelerate. My impression is that the naive potential for the Higgs field has a negative value at the minima. Do people take it seriously as a negative cosmological constant? Is the dynamical change in the value of the potential at the minimum during EWSB taken into account?

There are two things to consider here: the late-time accelerated expansion, often discussed within the context of the cosmological constant, $\Lambda$, and primordial inflation. Let's take the latter first.

In primordial inflation, one has a field initially evolving in the false vacuum of some potential energy function. The false vacuum must be very flat in order to get enough inflation and generate the right spectrum of density perturbations. For example, 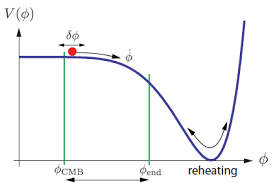 Cosmologists early on hoped that the SM Higgs, or perhaps a GUT Higgs, might have been what drove primordial inflation but the trouble was that the false vacuum wasn't flat enough. In recent years, this idea has been regained momentum when it was realized that if one coupled the Higgs to gravity (as a non-minimal coupling with the scalar curvature), then one could flatten this region and obtain successful inflation, see https://arxiv.org/abs/0710.3755.

Once the Higgs decays to the true vacuum, primordial inflation ends. If the true vacuum, however, has a nonzero vacuum energy, then it's possible that the Higgs field could contribute to the observed late-time accelerated expansion. As you note, the classical vacuum energy of the Higgs is negative, $\rho_{\rm Higgs, \,vacuum} < 0$, and this is not what we observe. Therefore, it's possible that the effective cosmological constant is something like $\Lambda_{eff} = \Lambda + \rho_{\rm Higgs,\,vacuum}$, but this subtraction would need to be fine tuned to get our tiny observed amount of cosmological constant.

The cosmological constant is part of the mathematical framework of General Relativity.

The Higgs field is part of the mathematical framework of quantum field theory and particle physics .

At the moment there is only effective quantization of gravity, used in cosmological models , and yes, if you google higgs field and the cosmological constant a number of publications come up, so people are examining the possible relation.

A real proof will come only when/if a unifying theory of everything embedding the standard model of particle physics and gravity is found.

In this answer I give a link to a related question, on how string theories, which include both the standard model and quantization of gravity may deal with the problem.

2
Why does the cosmological constant problem use the expectation value of the QFT vacuum energy?

19
Vacuum Expectation Value and the Minima of the Potential
1
Do expectation values of quantum fields behave like classical fields?
2
Is Higgs cosmology a largely ignored theory, and if it is, why?