I have been reading though a textbook on banked corners (which I get to shortly) and centripetal force, and I have a few question as some of the things mentioned don't make sense to me. So to start, I was told that the horizontal force component of the tension on the conical pendulum provides the centripetal force in the system (and please correct me if I am wrong). I understand that there must be a force acting, even if the ball is at a constant speed, because the direction is changing, thus velocity. A change in velocity is acceleration (centripetal acceleration), thus we get a force. If we draw a draw two velocity vectors at $90$ degrees to each other, and subtract them to find the change in velocity the resulting vector acts inwards, thus acceleration and therefore the centripetal force acts in the same direction as the horizontal component of the tension force.

So far this makes sense to me. However:

I was reading about banked corners. They increase the centripetal force to allow cars to travel around a corner at a high speed. The textbook says: "If a banked corner was frictionless, to prevent the car sliding down the bank from gravity, or excessive speed resulting in the car going up the bank, the horizontal component of the reaction force (to me what looks like the equivalent of the horizontal tension force) must be equal to the $F_c = mv^2/r$" This is called the critical speed. In addition to this, I thought that a car turning around a corner had its centripetal force provided by friction. This is frictionless, so is the car not turning? 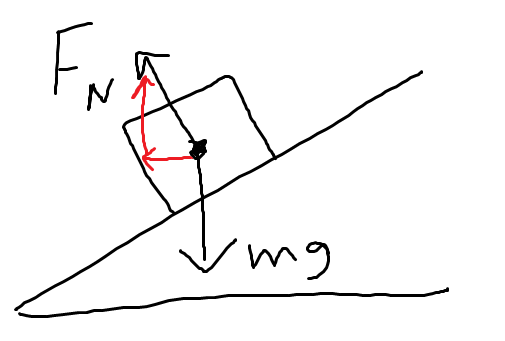 I've drawn a diagram here that should illustrate what we're talking about. Hopefully you can see from the picture that the reaction force, normal to the road surface, has a horizontal component that point towards the "center" of the banked curve (imagine it as being part of a larger conic shape). I drew the normal force components in red to make it clear. The horizontal component of $F_N$ is the only force acting in this direction, thus it acts as the centripetal force.

In the case of a car driving on an unbanked road, this reaction force is still normal to the road surface, but now the road is flat. Therefore, the normal force only has a nonzero vertical component, and friction would indeed be the cause for the centripetal force.

Not the answer you're looking for? Browse other questions tagged newtonian-mechanics centripetal-force or ask your own question.

1
Question regarding centripetal force and tangential force
3
Car on a frictionless banked curve
13
Why does friction play the role of centripetal force during the turning of a car?
2
Centripetal force in this example?
4
Friction of a Car in Motion
0
How to predict direction of force of friction on car in banked roads?
0
Conceptual Background for Banked Turn Problems?
2
Banking of road
0
Circular motion and banked roads question