When you are standing on the floor, you push down on the floor and the floor pushes back on you. Why doesn’t the floor make you rise up? [closed]

What is the meaning of the phrase "rise up"? By Newton's 3rd law the force that the floor exerts on you must be equal in magnitude (opposite in direction) to the force that you exert on it. What force are you exerting on the floor? More importantly, what is the nature of that force? Most people would immediately say you are exerting your weight but this is not quite true. The earth's gravitational field is what creates your weight and the Normal force is NOT related to this. It is not a reaction to your weight.

When two bodies touch at their surfaces there is a contact force that causes them to be repelled from each other. This force is perpendicular to the surface of the two bodies and we call it Normal force. There are a lot of assumptions being made here about the behavior of the bodies and in the right circumstances this could be violated. For one thing we are assuming that the bodies can withstand a infinite amount of stress without any strain. When solving basic physics problems we take whatever idealizations are needed to make this true and infer what the normal force is by solving Newtons equations. We don't know what value it will have in a given situation. In some sense it acts as a rigid constraint.

In the simple case of an object resting on the floor we would analyze the forces and determine that the object has weight due to gravity and "some other force" due to contact with the ground, this is $N$. Since the object is not moving (a given in the problem) we must have $N = mg$. We simply have no other choice based on the information provided.

Consider another case. Two objects are floating in space, removed from all other sources of gravity. If they come into contact what happens. If we neglect the gravitational force between them them then as soon as they make contact the "normal force" that each exerts on the other will cause them to accelerate away from each other. In fact the contact force does cause one of the objects to "rise up" away from the other. In the limit of them being brought into contact quasi-statically if they are touching then we will either have $N = 0$, or they will move away from each other due to a non-zero $N$. In fact one could argue that if the two are at rest and appear to be close then they are probably not touching, there is an infinitesimal space between their surfaces.

Consider one more situation. A person stands in an elevator that is accelerating upward. Assuming they remain in contact with the floor the normal force would be determined from Newton's second law to be $N=m(g+a)$. In this case $N$ is responsible for the person's upward acceleration. You might think it's the cable attached to the elevator but it is not. That force does not connect to the person. Only the force of the floor acting on them does. So, in this case the force of the floor acting on the person does in fact cause them to "rise up". But not off the floor.

All of these examples treat the floor as some type of ideal constraint. In fact they also treat the other objects, people, etc. as having no structure. Our material structure is made up of atoms connected by a web of balanced interaction forces (glossing over all the quantum processes required to get to this point). In the macro world some of this is experienced as elasticity, and plasticity, bulk properties of large chunks of matter that we are familiar with from experience. What makes an object distinct from others, at least in some sense, is the boundary that appears to exist which keeps its atoms contained in a well defined volume of space. The space I occupy seems to be separate from the space my chair occupies. When two objects touch there is deformation of this boundary, compression of the matter inside, etc. What we see in the macro world as a Normal force is the result of these processes coming into equilibrium so that the bodies in contact are not destroyed or fused together with all their atoms mixing up. When I sit in my chair both me and the chair experience stress from the contact forces present and strain, compression and redistribution of matter. From this point of view you can think of the generation of $N$ as similar to hanging a mass on a horizontal wire and letting it come to equilibrium. You could ask why doesn't the tension in a wire case the mass at the end to "rise up". In some sense it is creating enough "rise" to compensate for the "fall" gravity would produce were the floor or wire not there. The concept of Normal force, or contact force in general, only makes sense under the conditions where everything is preserved, left undamaged in the process. It is possible for these conditions to be violated and for $N$ to be meaningless. In fact the study of contact forces like $N$ and friction at a micro-scale or even nano-scale are an interesting area of physics.

As a final example consider jumping. In this case you are redistributing your body parts and exerting force with your muscles to accelerate yourself (relatively speaking). But at the end of the day those are all "internal" forces. The only external force acting on you (neglecting air resistance, power line fields, etc) is $mg$ from the earth and $N$ from the ground. So, in fact the ground can be used to make you rise up. In reality when you jump you are pushing the earth away from you, and the earth pushes you away with equal force, and you both move away from your common center of mass, which hasn't moved at all.

There are four forces at play here, in accordance with Newton's Third Law, or two action-reaction pairs. 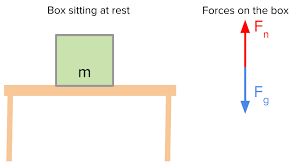 The common misconception here is treating $mg$ and $N$ as an action-reaction pair, which they are not. If you do so, you'll reach an incorrect conclusion like the one in your question.

The conceptual clarity to have is that Newton's Third Law states that "If A exerts a force on B, B exerts an equal and opposite force on A." Action-reaction forces, by definition, act on different bodies. It's useful to keep this in mind while applying Newton's Third Law.

Also, it seems from your question that you're looking at the forces as sequential: "first you exert a force on the ground and then the ground exerts a force back onto you". This isn't how forces work: the ground pushes back on you because you're pushing down on it. If you push down harder, the ground will push you back harder. It happens at the same time. These forces act simultaneously and instantly.

Of course, it's easy to see from the free body diagram that the net force on the body is zero and hence your acceleration, is, from Newton's Second Law, zero.

Why doesn’t the floor make you rise up?

Because the repulsion between you and the floor only happens appreciably at extremely small distances. The floor pushes against you very hard when you are very close but once it has pushed you away a small distance the force drops off very quickly.

This is a fun answer:

Can you stand on the water? The answer is No?

Why? Because the water is less dense than your body, and your body displaces enough volume of water to compensate for your weight, and you have some buoyancy. Archimedes principle. The downward force from the weight is equalized by the from the buoyant force from the water.

Start making the water denser and denser, you can float on the water, as the bottle full of air here. The density of the ground is such that you are at the limit where buoyancy is really the opposing force.

Unless extra energy is supplied the force of gravity is opposed by an equal force from the ground. If the force of the ground made you rise, energy would not be conserved.

Because the net force on us is 0. We push on floor and the floor pushes on us but also the Earth pushes us too and this is the same reason why we push on the floor. So the "forces" acting on us are : the push of floor and the pull of Earth and they cancel each other therefore we don't accelerate (this is true for the poles only). As on other latitudes the floor pushes us a little bit less so than we can rotate around Earth with the same speed as the ground below our feet does.

if you ask why the force from the floor doesn't accelerate you (make you rise up) because it is busy keeping you in place. it is cancelling the acceleration produced by the earth. if somehow the gravitational force vanishes or switches off for a moment then you WILL rise up. I had similar questions when i was beginning to learn physics. Good.

7
Why doesn't a wall move when you push it if there's space behind it?
0
Why does the water rise upwards when the bottle fall down with accleretion $>>g$?
4
Normal force vs reaction force
1
How is the wind pushing the crate left in this exercise, is the force applied is downwards and to the right?