Why is tension at the free ends zero? 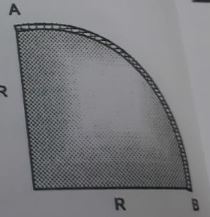 Both of these are questions that are almost identical: We have a rope with mass density $\lambda$, kept in equilibrium on top of a surface, with friction. We have to find tension as a function of theta, (and coefficient of static friction for the first image, for the second it's given to be 1/3 and instead we have to solve for the (maximum) angle). I managed to solve both of them but took some assumptions which aren't quite clear, now that I think about it more:

Consider a very short section of the rope $d\ell$, with mass $dm$. The equation of motion for this segment along the line of the rope is

If there is nonzero tension in the rope, we can work in the limit where any gravitational force $dm\,g$ is negligible. This equation of motion is where we get the approximation that, in a "massless" rope that doesn't stretch, the tension in the rope is a constant. If $ T_\text{forward} \neq T_\text{backward} $, the approach predicts that the acceleration $a$ gets bigger as the mass segment $dm$ gets smaller.

Now look at the last segment on the rope, where the tension along one direction is absent:

The tension in the rope at the end must vanish, unless the final segment is to accelerate.

OK, here is now my take on question 2. I already answered question 1 in another answer and would normally edit this answer, but there seems to be a lot of confusion about tension and I think a separate answer would bring attention to the issue better. I have 2 main points:

1 - Tension will influence friction. There is a lot of confusion in many of the answers and even in the question about whether tension influences the normal force or not. The confusion stems from the fact that when we consider a small length of rope and have this length tend towards zero, the normal component of tension tends towards zero, which makes the frictional contribution of friction tend towards zero. However, when the length of every rope element tends towards zero, the number of rope elements we must consider tends towards infinity. For tension to be neglected, is has to tend towards zero faster than the number of element increases. This is basically a version of Zeno's paradox. By not adding an infinity of very small contributions, we are shortchanging ourselves.

For those who are not convinced, imagine you have a rope wound in a loop around between two parallel rods, making an oval. First, pull the rods away from each other only slightly, so that there is little tension. You can move the rope around the rods easily. Then, apply a lot of tension with the rods, so that the rope is very taut. You will have a much harder time pulling on the rope to move it relative to the rods. This is why you must tension belts used to transfer power in industrial and other applications. If there is not enough tension, the belt slips.

Now, one would have a tendency to think "but that is not the same", this answer talks about finite lengths of belt, and the zero tension approximation talks about infinitesimal lengths of rope. This is true, but how will friction increase at the macro level if we can neglect it at the micro level? This is not possible. Every small element of rope contributes a little bit to friction.

2 - Now the question becomes: can you neglect friction here, understanding that the only external force is gravity (no external tension)? The answer is probably not, unless you are looking for an approximation.

To see why, imagine a discrete system of 3 blocks linked to each other by very stiff springs. By very stiff, I mean that any tension can be exerted between the blocks without moving too much the blocks, so that these movements can be neglected. This is similar to a non-stretchable rope. To model a rope, we will also assume that the springs cannot work in compression, only in tension, with the force exerted my the spring being zero in compression (with negative tension).

For example, put the blocks on round surface of the question at 30, 45 and 60 degrees relative to the horizontal. First, imagine that you position the blocks without any tension in the springs, in equilibrium. This is surely possible if the coefficient of friction is large enough. Now, add a bit of tension in the 45 to 60 degrees spring. Tension will change, which will change friction, and we are still at equilibrium. So, the question

We have to find tension as a function of theta

Is not uniquely determined. What I guess is meant is what is the tension as a function of theta when the coefficient of friction is minimal. My guess as to why tension is neglected in the part of the original question that causes a problem is that the solution took the whole rope as an entity and tried to determine what the total friction is. The free body diagram for the rope would naively include for each element gravitational force, normal and friction, and then one integrates to have these total forces, and since tension is zero at both end, nothing else. However, as seen above, tension cannot be neglected so simply. This would be like assuming that if you replace the rope by a clamp, the internal forces in the clamp can be neglected. The only way one could neglect tension in this manner, is if tension is somehow much smaller than gravity and friction everywhere. This is probably not the case at least in the first figure. For the portion of the rope that is close to point B, tension is of the order of magnitude of gravity, as both forces are close to vertical, so friction is negligible. However, if you take a piece of rope spanning say 10 degrees from point B, the tension at the bound end will be oriented relative to the vertical by 10 degrees (and of the order of magnitude of the weight of the piece of rope), and there will be a normal force due to this tension, which will create some friction, in addition to contributions from gravity.

Naively, one would think that friction close to B, but not at B exactly, would be twice the friction exerted if tension is neglected. Indeed, gravity and friction act in opposite directions approximately and are of about the same absolute strength. Indeed, since the normal force created by these forces is small, which determines friction, friction cannot play a major role in reducing the tension.

In conclusion, without seeing the original material from which the questions are taken, and the original solutions, saying that tension can be neglected when calculating friction is wrong. There may be something in the original problem that hints that one should do this, or the answer may simply be wrong. I have seen university professors make mistakes, and I have seen mistakes in textbooks.

There are no mass elements on the left, however the ones it's right will definitely exert a force.

It is correct if we suppose that the friction is not constant. If there is almost no friction at right, so that the weight must be supported only by the last part in the left. As if it was nailed there.

But suppose all elements have a friction force $\Delta F_a = \Delta T - W_t$, (that means enough friction to balance the difference between the tangential componente of weight and the difference of tension in the element).

When the analysis comes to the last element, $\Delta T = T$. The free side has nothing pulling it, and the internal side has all tension of that region. Tension tends to zero as a consequence, when going to the free ends.

The forces in the perpendicular reaction, are Normal force, a component of weight, and Tdθ

The balance of forces in an element should consider $\Delta T$ and not $T$. But it is present only for the tangential direction as shown before.

As indicated by Jain Koustubh, one can work with a small segment of rope of mass: dm = λR(dθ). Then the radial forces would be: dN – g(dm)sinθ – T(dθ) = 0 and the tangential dT + df – g(dm)cosθ = 0 where the dN, df, and dT are the small forces Normal, friction, and tension associated with dm. (The T(dθ) is the radial change in the vector T which needs to be assumed negligible to keep the calculations simple.) I think that we can assume that the friction will be proportional to the normal force: df = u(dN) = ug(dm)sinθ where the u is a constant of proportionality and perhaps not the standard coefficient of static friction which gives the maximum allowed friction. With this expression for friction in the tangential equation one can solve for dT and then integrate from the lower end to find T as a function of the angle. I found T as a function of θ as indicated above, Set it equal to zero at the top and found u = 1. Then I set up a numeric simulation for sketch 1 (on a spreadsheet), working in half degree steps. The simulation agreed with my calculations. Finally, I modified the simulation to include the T(dθ). The result was u = 0.727. Clearly, the T(dθ) cannot be ignored. After further thought, I “tuned” my simulation so that it could work beyond 90 degrees (with the T(dθ)), put in the u = (1/3), and found that the tension at both ends of the 90 degree arc would be zero if the angle on the left side was 67.8 degrees. Without the T(dθ) the angle was 63.7 degrees.

Not the answer you're looking for? Browse other questions tagged homework-and-exercises newtonian-mechanics forces string equilibrium or ask your own question.

8
Frictional force on a rope wrapped around a drum
6
Pulley-rope tension question
6
How do we prove the downwards force of a massless rope on a pulley it wraps around is $2T$?
1
Why is force on a pulley two times the tension in the rope?
2
Forces along and perpendicular to a curve